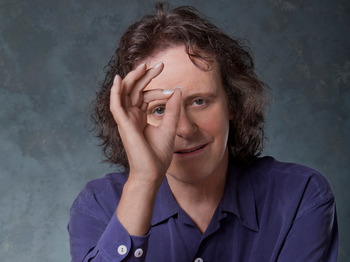 Many times during the course of the evening, Donovan pointed out that he had undertook this lengthy tour through the British Isles to thank his audience for supporting him throughout this half century in the music business. Describing this tour as a pilgrimage that saw him revisiting some of his old haunts (Glasgow, St Ives) and play some of his favourite songs from his extensive repertoire. Choosing to revisit his songs solo without a band, the stage was graced by a small podium with a rug and Kelly, Donovan’s green guitar that has been his instrument of choice for the past 20 years. The first half of the show was mainly devoted to songs from his first two LP’s: “What’s Bin Did and What’s Bin Hid” and “Fairytale”. Starting with the iconics “Catch The Wind” and “Colours”, he followed them by the more rarely played “Remember The Alamo”, a choice prompted by a fan request in Scarborough apparently. His young days in Glasgow and in particular his reminiscences of a cappella singing during Hogmanay parties with his family served as an introduction to the lovely folk tune “Guinevere” . We were also treated to some of his early pop hits with the sweet “Jennifer Juniper” (minus the French verse) and the catchy “There Is A Mountain” (written while holidaying in the Caribbean with his friend “Gypsy Dave”).

His rendition of Buffy Saint-Marie’s “The Universal Soldier” prompted the start of a second set that would prove more interesting for its anecdotes than for its musical content. His story about writing songs with Paul Mccartney at his flat in Maida Vale kept the audience enthralled (and we now know he’s responsible for the line “Sky of blue and sea of green, in our Yellow submarine”). However as he dug deeper in what can be considered his psychedelic period, the starkness of the acoustic renditions left you craving for the Mickie Most production that graces the records (Sunshine Superman and Season Of The Witch particularly…). His instance to pay tribute to deceased sixties and seventies rock-icons seemed a bit corny (the slide-show in the background only accentuated this). The nail in the coffin was the karaoke version of  Mellow Yellow that closed show and saw him strutting the stage in a very Tom Jones-y manner that beggared belief when you compared it to the thoughtful singer songwriter of the first half of the show. Maybe a smaller tour with a band in bigger venues would have provided a better setting for Donovan’s fantastic songs.