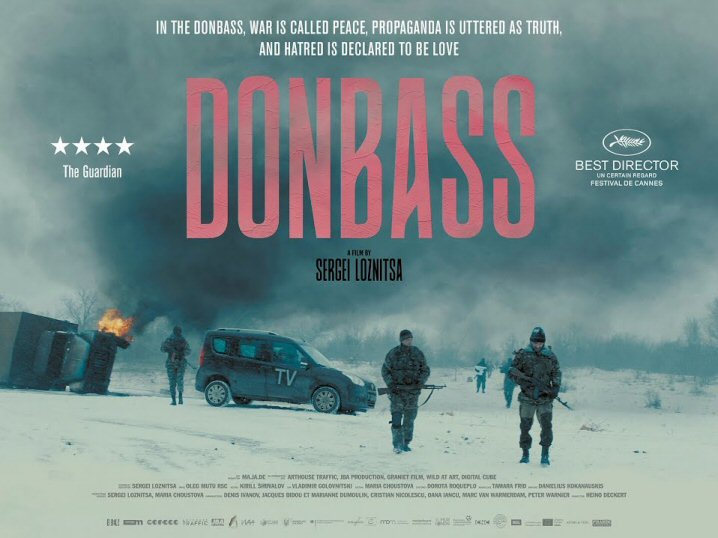 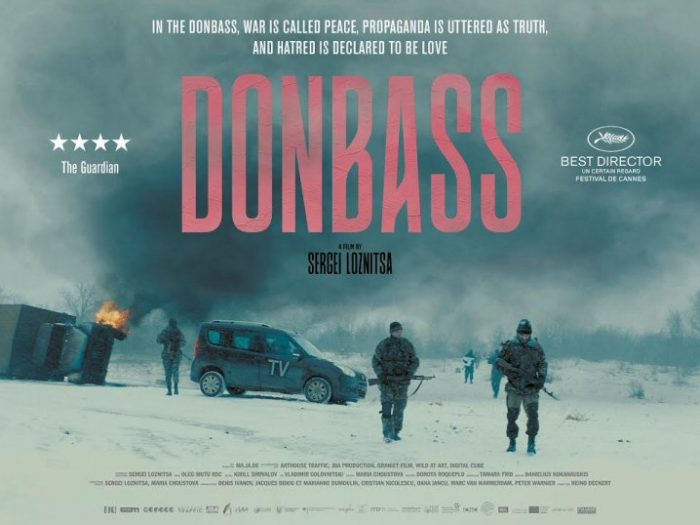 Jamie Havlin looks at an award winning film that examines the current conflict in Ukraine.

Named after a region in Eastern Ukraine, Donbass is a film about what is going on there and how it affects the people living there on both sides of the divide. The Ukrainian regular army and volunteers fight separatist gangs, supported by Putin’s Russia. Corruption and criminality of all kinds are rife. Humiliation is commonplace. Violence can flare at any moment.

Each of the thirteen segments that make up the film is based on a real event and are loosely linked. Most characters only feature in one section, although some feature in more.

Born in Belarus, when that country was part of the Soviet Union, Loznitsa has been dubbed the ‘maestro of miserablism’ and ‘art cinema’s ultimate bad time merchant’. Watching Donbass, it doesn’t take very long to see why.

It’s like a series of thirteen nightmares, which when taken together, offers a damning critique of this part of the world.

As Donbass opens, we see a group of actors and extras getting their make-up applied in the back of a trailer. A production assistant orders them to get out, presumably to film their scene. But this isn’t a feature film or TV drama that they’re taking part in. This is propaganda, a fake news story with controlled explosions in the background and a burnt-out bus. A woman who moments earlier was complaining to a makeup artist about not enjoying her job is suddenly acting like a stunned witness to bombings. ‘It’s impossible to live like this,’ she complains. ‘Every morning I wake up full of fear.’

Later we see a snippet of the incident being viewed as authentic reportage.

A German journalist is repeatedly branded a fascist, without a shred of evidence. ‘If you aren’t a fascist,’ one Russian soldier taunts him, ‘then your grandfather was.’

A looter is made to walk a gauntlet where he is beaten by around twenty soldiers with long sticks. 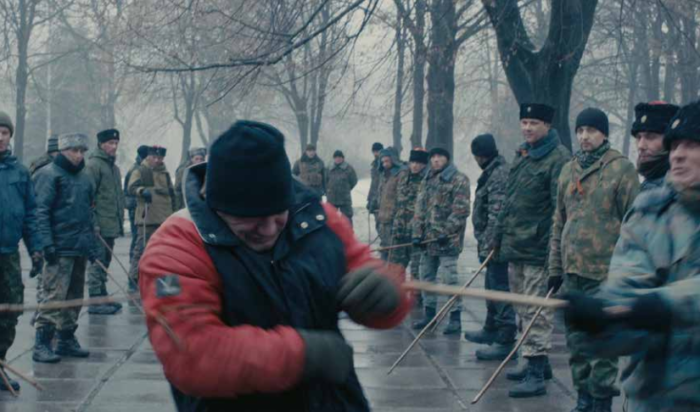 A news reporter is given a guided tour of an overcrowded bomb shelter that is now home to city-dwellers seeking safety. The poverty is Dickensian, several inhabitants lie on beds obviously very ill. There is no electricity and little food or medicine. The sole toilet isn’t working. ‘It’s as if we’re living in the Stone Age,’ one of the inhabitants observes.

The most memorable scene, though, is where a Ukrainian man with his hands cuffed, is forced to stand by a lamp-post in Russia’s proxy Donetsk People’s Republic. The intention here being that passers-by can abuse him verbally or physically. It sounds medieval but some young men who blow smoke into his face record events on their smartphones to give the punishment a modern twist.

A hate mob soon assembles, with one old woman squashing a tomato into his face. It’s gruelling to watch as the barbarism only gets worse. 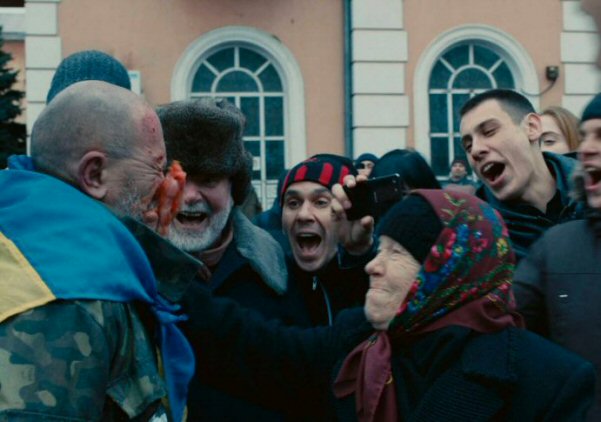 Donbass lasts just over two hours long but never feels like it. With one possible exception, a raucous wedding ceremony, the vignettes don’t overstay their welcome.

The story ends where it began. In the trailer with some of the actors glimpsed in the opening scene. It’s the longest sequence in the film and its final ten minutes or so is filmed in one long take with the camera static and focussing on characters who we can hear in the middle distance but not identify. It’s a chilling finale to an often compulsively mesmerising film.

Sergei Loznitsa won the prestigious Un Certain Regard Award for Best Director at the Cannes Film Festival in 2018. He deserved the recognition.

Extras here are sparse, but there is a trailer, and a collector’s booklet featuring a new essay by film writer Jason Wood.