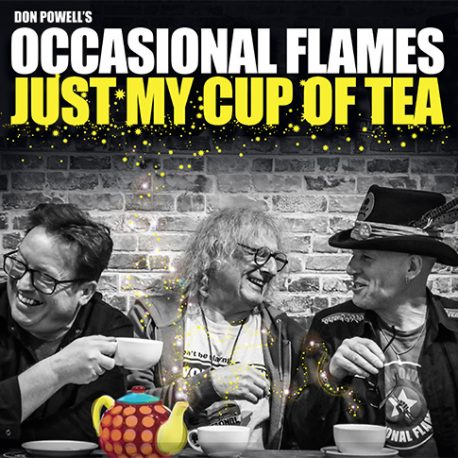 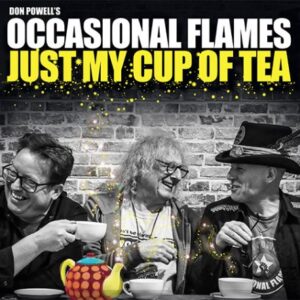 The saying “never meet your heroes” would be the antithesis of the circumstances surrounding the formation of Don Powell’s Occasional Flames. Poet Paul Cookson had been organising gigs in Retford under the moniker “Pies, Peas and Performance” for several years, Les Glover had played there several times with his partner-in-crime Henry Priestman. Les and Paul discovered that they shared a love of all things Slade. Paul had been exchanging emails with Slade drummer Don Powell which led Don to attend Retford for an evening of yarns about his time in Slade. The evening was a resounding success and Don even joined Les on drums for a couple of Slade classics. Plans for another evening were mooted and further recording sessions were held over the next few months resulting in the several releases that were grouped under the Taping The Hiss CD.

On a roll, the band continued recording for a follow up, whose release was delayed due to the pandemic but, finally, the finished album Just My Cup Of Tea is available to buy. As per Slade’s tradition, the song are catchy and to the point with great arrangements and often feature a tongue-in-cheek sense of humour that’s guaranteed to raise a few chuckles from the listeners. Glover and Cookson are both rock fans so we are offered a few rock aficionado references here and there, the title track being a prime example (“Old men, new teeth, everyone can be like Mick and Keith”) and a remarkably catchy tune to boot. Come on Radio 1, play the damn song… The band are on a roll on both the frantic Mid Life Crisis and its catchy guitar lick and the stomping Coz We Luv You, Glover and Cookson’s love letter to Slade.

Les has a separate careers as solo performer under the Loved Up Les moniker, and I Won’t Be Playing Wonderwall Tonight is a clever Oasis pastiche (including some very authentic sounding Noel Gallagher-guitar solos) which charts the challenges of playing in pubs where punters often expect you to play covers rather than your own material. The jangly To Be Continued could easily pass for a Difford-Tilbrook track, while the gentle How Did We End Up Here?, with its minimalistic arrangement of acoustic guitar and cello, proves to be one of the albums high points. Side one closes off with the rollicking Rhythm Of The Road.

Voodoo Shoes opens side two with another great melody, and its driving banjo picking certainly contributes to make it another great song. The rockers Ordinary Stars and Beauty And The Beat and the ballad Dreams Die Hard might be slightly less memorable than all the tracks that preceded them, but they remain goods songs that fit well in the LP’s flow. Things pick up again on If (Is The Middle World In Life), a fantastic tune where Les’s vocal really gives the song an extra depth. The acoustic We Are The Hearts is another intimate number with acoustic guitar and cello (with added percussion this time), where Glover proves his songwriting chops are up there with the best. We started in rock buff territory and things come full circle with Bernie And Elton, a gentle track on songwriting partnerships (and relationships) that leaves us on a reflective note.

More info on Don Powell’s Occasional Flames can be found at their official website.