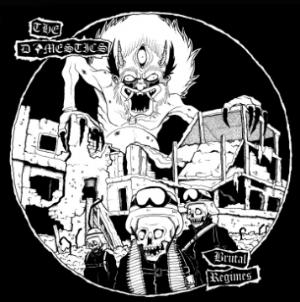 Snotty, obnoxious punk rock played at amphetamine speed with a part two-fingers in the air, part political message.  Raw is definitely the word and they seem to have found a sound engineer who understands that punk rock requires everything to be loud and pushed into the red. The combination of distorted shouty shouty vocals and raw fast chaotic punk rock transports me back to the mid-late 80s and the likes of Chaos UK and Ripcord, maybe even a bit of Heresy in the bass and drums department. There’s probably a Black Flag influence in there with some of the guitar but this is very British sounding and very punk.

Each side has 2 short sharp numbers followed by a relatively long one – long for the Domestics meaning it clocks in at 2 minutes.  “Brutal regimes” uses the extra minute for a breakdown that conjures up Conflict from the  “Final Conflict” LP era in the playing and overall sound which is something I noticed on a few of the other tracks. “Into The Light” has some stand out crazy guitar work that surely has a Japanese HC or Poison Idea  influence. As for the short songs, “You’re Fucking Dead” has to be the best song title in a while and the estuary East Anglian “Facking Dead” gives off proper menace. What do you think of work? “I love my job” is The Domestics’ sarcastic response! Anyway, have a listen yourself:

The record is a joint release between European label Kangaroo Records and singer James’ label, Kibou Records. It comes in 2 colours – clear (400) and silver (100).  All come with a download code, available from this link.

At the risk of writing a review longer than some of the songs, I’ll conclude by saying it’s a rager.