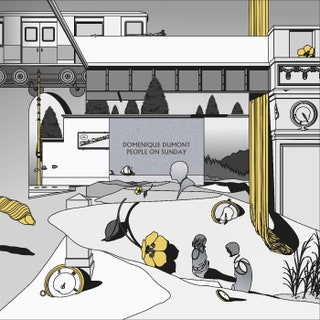 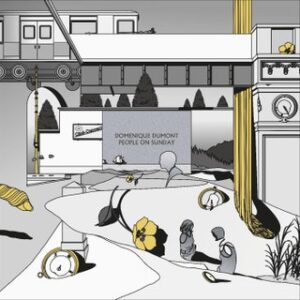 Out now (all formats) – buy here

It’s often said of ambient music that it sounds “like the soundtrack to an imaginary film” yet to be made. In this case the film is real – and was made 90 years before the soundtrack.

People On Sunday is a black-and-white silent film from 1930 Berlin, made by a trio who would soon flee the advance of Nazism and make their names 6,000 miles away in Hollywood. As such, it’s something of a landmark in cinema history: a fascinating snapshot of Weimar-era Berlin before the appalling events that would soon engulf Germany and much of Europe. A last taste of freedom, if you like.

Domenique Dumont’s wistful score cloaks the images in the same lazy, hazy miasma of memory that the film evokes, but works equally well as a standalone musical piece. For the full experience, however, I would recommend cueing up the film on YouTube and syncing the music. It’s all instrumental, and barely half the length of the full film, but the titles – Arrival, Gone For A Wander, Falling Asleep Under Pine Trees, Merry-Go-Round, Running Down The Hill, Watching Boats Pass By – make it easy to cue them to coincide with the images.

The film itself is a blend of documentary and drama depicting everyday life in the German capital – and, specifically, a relaxing weekend. Its dramatic scenes, interwoven with newsreel-style footage of the city at work and play, focus on five individuals – all played by non-professional actors, using their real day jobs as a backdrop – enjoying a sunny Sunday of leisure and romance.

Against a backdrop of Berlin’s inter-war café society, boys and girls meet up; they travel to the lake for a day out; romance blossoms by the beach, where friendships are formed; they listen to music on a portable record player – there’s something almost futuristic about that! – and secret assignations are made in the pine forest behind. Then they all go home and get ready to go to work again the next day.

The narrative of the film is reflected in the music of Domenique Dumont, a pseudonym previously used by a trio – Latvian producers Anete Stuce and Artūrs Liepiņš and a French singer who may have been fictional – on a 2015 album Comme Ça, blending gentle Balearic beats and French pop. It was followed by Miniatures De Auto Rhythm. Neither were like this.

Now reduced to Liepiņš and “an artist from France whose existence can neither be confirmed nor denied,” ‘Dumont’ was invited to compose the score for a special screening and live performance of the film – also known by its German title of Menschen Am Sonntag, and the French name Les Hommes Le Dimanche – at the Les Arcs Film Festival in the French Alps in December 2019.

Dumont says: “Working on this score strengthened my belief that the time we currently live in, although far from perfect, might be the best time to be alive,” he says. All the bells and whistles, all the advantages that we have the opportunity to enjoy in the 21st century, are things people couldn’t have dreamt of only a hundred years ago. At the same time, we haven’t yet transformed away from our sense of humanity.

“As absurd and optimistic as it may sound, we are living in a utopia compared it to what came before and, perhaps, what is to come. Somehow this movie made me think of the present more than the past.”

The music, especially Sunshine In 1929, captures that mood by using electronic instruments that were not even invented at the time the film was made, yet somehow seem appropriate with their ethereal effects, delicate beats and fluttering arpeggios evoking the same sense of wonder and delight as the film, evoking a lost age of innocence.

In terms of cinema, too, the film is a piece of history demonstrating the generation of German talent that was lost: the script is written by Billy Wilder, it’s directed by Robert Siodmak, and the cinematographer is Fred Zinnemann – all three of whom became genuine Hollywood legends after they left Germany to escape the dictatorship of the Third Reich.