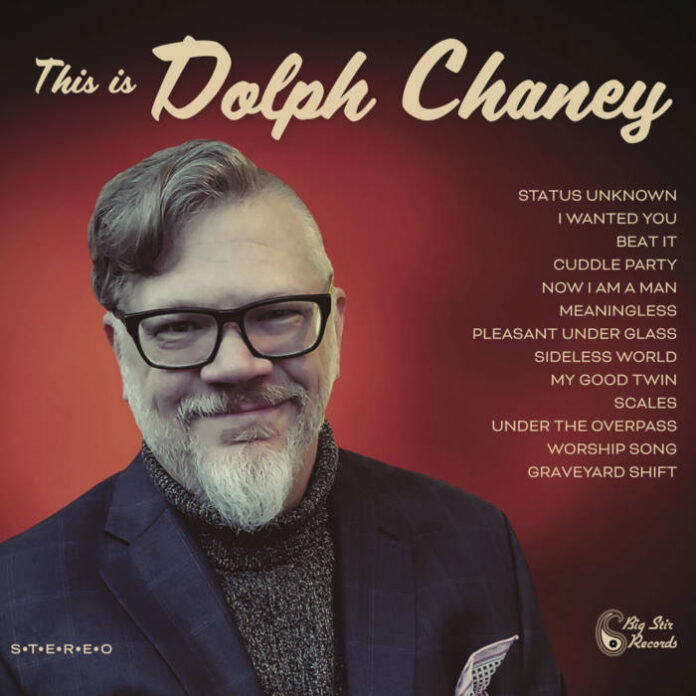 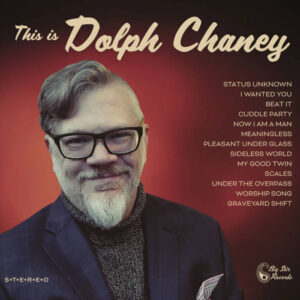 New album from singer songwriter Dolph Chaney, his second for Big Stir and the follow up to last year’s well-received Rebuilding Permit. This collection consists of 13 brand new recordings that were overseen by studio boffin Nick Bertling at his Bertling Noise Laboratories set up…Ian Canty finds out about the man and his music…

Dolph Chaney made his first forays into music way back in 1987, but it is only in the last few years that he has been making the kind of headway his talent warrants. After his recent (and excellent) Rebuilding Permit album from last year, his first for the Big Stir label, he’s back now with a new LP simply entitled This Is Dolph Chaney. Changes are afoot though, whereas in the past Dolph did pretty much everything on his own, on this latest collection he collaborates with Nick Bertling of Bertling Noise Laboratories, who produced the set in addition to playing various instruments too.

The man of the moment though is looking chipper if not positively suave on the cover photo. Together with the rest of the design style utilised, the sleeve brings to mind a greatest hits album, with the song titles going down the right hand side as we face it. This is actually not so far from the truth, as the selections featured find Dolph sourcing 13 songs from his back pages. These numbers were written at various times during the last 30 years with the oldest effort being Under The Overpass, which was originally conceived way back in 1991. Fortunately enough and adding to this “best of” feeling, you can pick virtually any track on the record and come up trumps with something would sound great coming out of the radio, hi fi, jukebox, anywhere really.

Status Unknown swings This Is Dolph Chaney into action with a slow and acoustic fade in. Then we are swiftly introduced to a sense of mystery and inner turmoil that pervades the subject matter of this record. Soul searching often draws a blank here or leads to a dead end, leaving more questions than answers – just like in the real world. In this song the vagaries of life leave the protagonist seems to be alienated by the people he most wants to know, which again reflects harsh reality. Added to that, the music is perfect – in particularly the patient build to a honeyed guitar solo. It’s an early indication that lets you know you’re dealing with someone who will go to great pains to create a gratifying and beautiful musical arrangement, which gives the lyrical stories a firm framework to work on.

A full-on guitar pop/rock monster of a tune I Wanted You follows, it’s catchy as hell and seems to address the sense of release gained by coming out of a toxic/failed relationship. I know the feeling, when I’ve personally tried to carry on regardless of the fact that there is really no hope and the best thing to do is bow out. We go down a few notches on Beat It, I think this one recalls Neil Young a little bit, in Dolph’s voice and the feeling of hard-won authenticity. The very touching tale is given an apt and sensitive treatment. One should also not downplay Nick Bertling’s achievements here – he works as a perfect foil for Dolph all the way through.

Cuddle Party adopts an edgy new wave style, something which suits the song and is very well accomplished. Dolph’s voice is great here and the simple keyboard line fits the tune like a glove. The song itself cannily picks out everyday images that gain importance beyond their worth when one is reflecting back on lost love. There is a true depth to the songwriting on this record, something which is only gained through often bitter experience. Starting with a lovely bit of jangly guitar and rhythm riffing, Now I Am A Man, with “I just had my first prostate exam” among the great lines included, sketches around the necessary adjustments needed to survive over the years with a knowing eye. Then Meaningless opts for a much sparser musical setting, here Dolph dwells on life’s many questions, but not in a lofty or inaccessible way. The spacy feel of the music supplies a meditative background to fit the serious subject and the guitar motors everything along in fine fashion.

There’s a trapped feeling to the words of Pleasant Under Glass, which appears to address another (or possibly the same) unbalanced relationship. But an irrepressible melody offsets the darker lyrical stance, a bouncy pop tune to cherish with some well-judged backing vocals. Strummed acoustic guitar and drones herald Sideless World, a beaut of an atmospheric lament to life’s redemptive qualities (I think?). This may seem like heavy stuff and in truth it is, but Dolph is always careful to undercut the seriousness with humour, like on the lively and infectious My Good Twin, another track that would make an excellent single. This segues into another ebullient rocker in Scales, with smart and memorable lines like “I wish these water wings could help me fly away”, which for me emerged as a particular favourite.

The cool meander of Under The Overpass comes next. Another tune just made to come flowing elegantly out of the radio, Chaney can turn up these kind of gems in a way very few can rival in this day and age. Penultimate track Worship Song then comes out swinging with a pure pop surge, the words dealing with an internal dialogue between Dolph and Jesus, where the former confesses “I’m a dumbass – forgive me”. Finally Graveyard Shift brings things to a downbeat but fitting conclusion, with the dark subject presented in only a few verses. The music has a strange kind of eternal feel, offering some light where in other hands the whole thing could have been too doomy. Anyway, it’s an ending that works the near-impossible trick of being both low-key and epic at the same time.

Looking at the album as a whole, it digs deep into the artist’s psyche over three decades. It doesn’t offer easy answers, but does reveals the joy and knowledge that learning hard lessons can bring. Though situations no doubt changed over the 30 years the songs span, the “big” questions are still there and Dolph is not afraid to meet them head on. Which is very brave really and certainly pays off as it stamps genuineness right through the record. Returning back to the “Greatest Hits” idea, these tunes successfully latched themselves in my subconscious and like the great collection it is, I suspect more plays will yield further delights. This Is Dolph Chaney works both as a concise and neat introduction to his work and as an enigmatic, thoroughly enjoyable album of depth, real emotion and sharp insight.