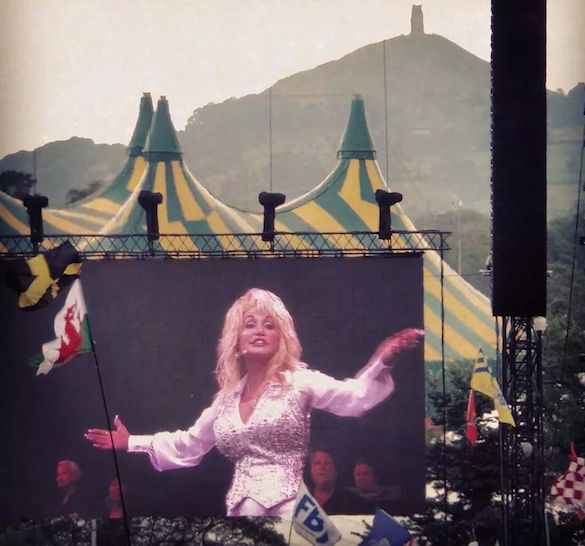 There are moments when Glastonbury transcends the mud, the fuss and the bother of festival life. Moments when its stands head and shoulders about the run of the mill festival bills of indie landfill and a true star wanders into the mud and pissed stained midst. No other festival has this magnetic affect. No other festival can book these kinda names.

There she is in the distance, the only person who may look like an ant in size on stage but projects into a huge glowing presence and into a true star. Shining in white, it’s Dolly Parton who oozes Dolly power and who has the Elvis glow all about her. She may be made of bone china, she may be made of plastic but she is five foot something of pure American star with a genuine warmth and sincerity that makes the glibbest of ad libs seem like they are stained with gold and breaksthe hardest of hearts with a joyous party of emotional pop perfection.

A true star does not do mud and DolLy is spotless and she is rubbing it in with that all white outfit. The tiniest spec of Eavis’s notoriously sticky farm mud would attach itself to her clothes and be a stain on her perfect white and maybe even on the soul of America itself – a spec of muck that would be beamed all around the world but there is no stain, no mark, no scuzz, now cow muck- just the pure white angelic glowing candy floss of stardom.

It’s hard to imagine her backstage in her caravan. How does she get to the stage? float above the mud? is she real?

A country tinged singer who sings from the heart and soul of whatever is left of the American dream. Her voice is crystal pure and tinged with the twang of her y’all accent- the Deep South flavour that was apparently an old English accent from Norfolk way and brought back home to the heart of the English Deep South.

A perfect songwriter she is no living doll but a genuine creative force and a key influence on modern American music dealing out her jukebox of candyfloss perfection with songs of heartbreak and love and also the monotony of work in the anthemic ‘Nine To Five’ which sounds massive and has the whole field, which is as packed as it was for the Rolling Stones hoedown last year, kicking up a dust storm of good times.

Dolly does a speech about peace and love and the sixties.

The speech goes on forever because it can.

There is a true star on stage not some bloke plucked from the bus stop. When she sings hearts bleed and when she talks everyone listens.

This the voice of dashed dreams and all human emotion is here.

Dolly is not just another singer.