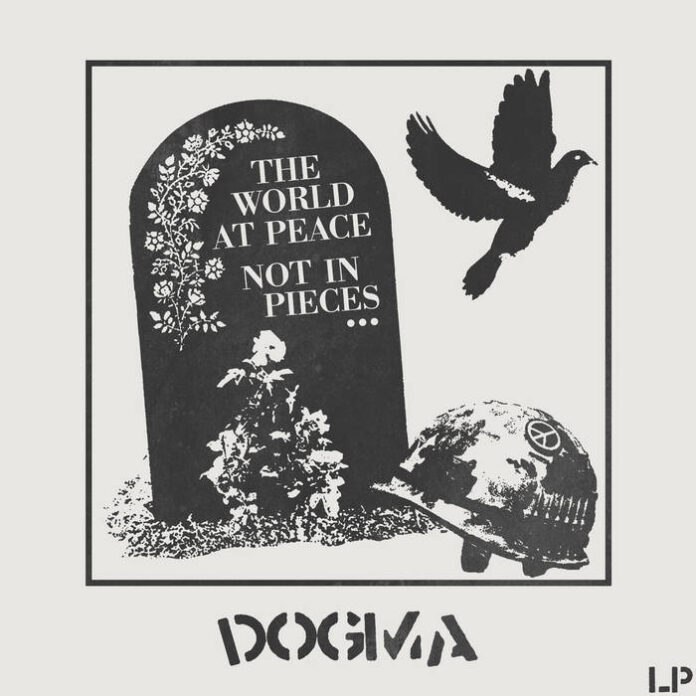 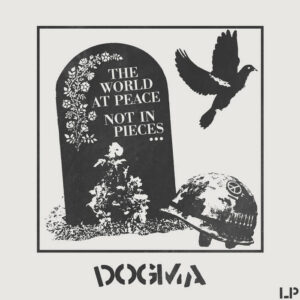 Dogma – Dogma (Grow Your Own)

At first glance the new Dogma album looks like anarcho-punk but this protest music is melodic with a much wider sonic appeal bringing in first wave punk and even Oi influences. Nathan Brown likes what he hears.

Before even playing this record you will be struck by an anarcho-punk vibe. For some this is an instant draw while for others it can be a turn off. But look beyond that initial assumption or you risk missing out.

The lazy review would be “File under: anarcho-punk” and not without good cause. This album’s on Grow Your Own Records, innit! Surely a label that could claim to be the modern home of anarcho-punk more than any other. Dogma call themselves “peace punks”, the North American foil to what this side of the Atlantic refers to as “anarcho-punk”. Dogma perform unequivocal protest songs set to a punk sound track. But this band are more tuneful and lively than that label often implies to the uninitiated. Consequently, people who usually turn their nose up at anything remotely connected to the anarcho-punk scene of the 80s may find this is right up their alley. 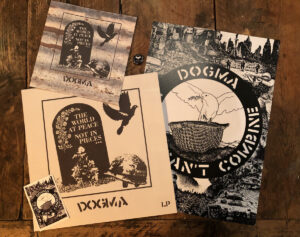 Stylistically the package does sit alongside The Mob and Omega Tribe’s singles on Crass Records in particular. Doves, peace signs and symbols of war alongside positive slogans. The poster artwork is similar to Wilf of Cracked Image Graffix‘s work for The Mob. They adopt the Crass font and the trademark Crass Records circle layout in the Dogma logo and on the A3 poster. It instantly identifies this as part of a worldwide counter-culture, sub-culture, clan, call it what you will.  Rather than bitch about the fact that this design concept isn’t new and innovative (much to Crass’s chagrin), I’ll celebrate that it still looks cool!  And great ideas should be shared!

Dogma provide tuneful upbeat punk with occasional power chords and singalong choruses.  Oh, this mob know how to write a catchy chorus which is probably part of their winning appeal.  Rhythmic drums roam occasionally around the kit in addition to providing the “boom chit” kick drum/snare combo beloved of so many punk bands. The driving bass provides momentum with occasional meandering flourishes. It’s straight up punk with cheeky little guitar melodies that isn’t overwhelmed by too much distortion.

This record sounds fresh despite having a sound that is arguably rooted in the past. (Having written the review I noticed Grow Your Own describe this album on bandcamp as “Old school meets new” – couldn’t agree more.) Steph’s vocal performance is clear rather than guttaral, sung and chanted rather than shouted. Neither angry nor dour and while it has an uplifiting quality,  in keeping with the subject matter of the songs it is not overly “skipping through the flowers” happy!

On their 10 songs, Dogma rail against societal inequalities and The System (“The tenacity of the rich and their dirty power tricks”), the combined forces of church and state, vivisection and even nuclear war (remember that? the missiles are still there!). They arguably cover what might be considered, forty years on, “traditional” anarcho-punk subjects. Among these themes of injustice and resistance they have more contemporary concerns such as gentrification and how refugees are incarcerated.

Dogma borrow a quote from celebrated Spanish anarchist Beunaventura Durruti to good effect “We carry a new world in our hearts”. Particularly apt when you consider huge chunks of society and areas of cities are fast becoming ruins thanks to the austerity policies Dogma highlight. And I think this slogan, emblazoned across the back of the album sleeve, demonstrates the role of this counter-culture. Direct action rather than songs is what achieves change, but the music can provide hope and solidarity to those who will “Persist, resist to exist” .

Listen to Beauty by Dogma

Every time I listen I hear something new. And this has received a lot of plays, something reported by a host of other listeners across social media. Within the simplicity there is complexity. It’s simultaneously crisp, melodic, driving, solid yet there is an occasional fragilty.

Drawing on the whole gammut of punk that went before gives the album a familiar feel straight way.  It might be the solidity of their musical approach reminding me of the better breed of modern Oi bands.  I’m thinking fellow Canadians Bishops Green in particular (and a riff on the song Sanctuary is close to Skinheads in Stapress!). Chunky bass and simple but effective guitar solos punctuating chord progressions.

Some song structures and the overall sound are in a similar vein to The System. The way the snare rolls and the bass wanders channel Toxic Waste or Flux Of Punk Indians on songs like Stigma and Indoctrination. The combination of clipped drumbeat, driving bass and frenetic “first wave punk” style buzzsaw guitar on some songs lean towards bands who borrow heavily from 77. The damping on the guitar conjures up the spirit of Zounds.

GYO have a track record for quality (and quantity too!) but I will go out on a limb and say this is among their best releases. They also know how to create a good package. The vinyl comes with A3 poster, 8 page lyric booklet while the CD has a poster and lyric sheet.  Download available too for those who don’t do things the old way.

This is one for grizzled old anarchos and young happening punks alike.

Available in the UK and Europe from GYO on bandcamp.
In North America probably best to direct your enquiries to the band who are on Facebook as are Grow Your Own