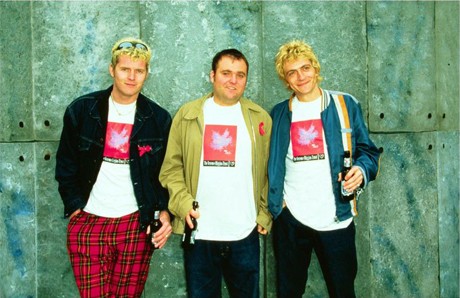 “Britpop Also-Rans” may be something of a tautology, but there was something about the minor bands of that era that struck a chord with a surprisingly large number of people. Dodgy were one such group, and here Clair Chapman is quite taken with the reunion that nobody knew they wanted.

Having delivered some of the best era-defining pop of the 90s, Dodgy were also known for their ability to “party like Ewoks”Â and ruffle a few political feathers too. They provided us with exquisite melodies and singalong tunes that held much more pensive lyrics than many of their counterparts. This, coupled with a vocal support for the Merseyside Dockers and the young people of besieged Bosnia, should have set the media alight.

But they didn’t. They weren’t nearly cool enough, and in fact they made remaining ”Ëœuncool’ an art form. They were happy to remain a bunch of likeable blokes, getting on with the complicated business of being young, enjoying life, writing great music, and having a social conscience.

Their steady rise to fame ended in 1998, and as front man Nigel Clark left to concentrate on solo projects and raising a family, Andy Miller and Mathew Priest decided to gather additional musicians and continue without him. It transpired though, that Dodgy are like a bonfire; you need all three key elements in place, for anything good to happen.

Almost ten years later, the terminal illness of a beloved member of their stage crew brought them back together, and before he died, they promised Andy Moore that they would work together again. After a bit of a false start (their first re-union tour was postponed due to Miller sustaining a broken arm just hours before the tour was due to begin), they got back on the road. Now, after four years of hard graft, lots of gigs, lots of festivals, lots of writing and recording, Dodgy are well and truly back.

The songs they had written and subsequently recorded in their studios in the Malvern Hills were later mixed in Denton, Texas by Matt Pence (John Grant, Midlake), and his delicate presence is very much in evidence on Stand Upright in a Cool Place. Each member of Dodgy has brought with him his own individual influences, as well as very different life experiences. This has produced a beautiful collection of songs that portray the realities of love and life, in contrast to the wide-eyed idealism of their previous three LPs.

‘Tripped and Fell’, and ‘Raggedstone Hill’ are both songs based on and inspired by the legend of a monk who inhabited the Malvern Hills, fell in love and was punished for doing so. A notable theme throughout the album seems to be thoughts on the sacrifices and compromises that make true love and a happy life possible.

There are wistful and introspective themes too, as well as songs of regret, lessons learned and reunion. These lyrics are then quilted with a warm layer of fantastically beautiful music. Each band member is a brilliant musician in his own right, and brought together, they build songs that are real music lovers’ music. The deep harmonies and West Coast sound have brought about comparisons ranging from Fleet Foxes and the Beatles, through to The Hollies and even early BeeGees.

The album is challenging without pretention and will undoubtedly be the must-have album of the year for the thinking 30+ demographic. It’s one to take in on your own, with a stiff drink and good headphones. It’s still Dodgy, but only in name. The boys who were staying out for the summer are now the men who came home for the autumn.

Stand Upright In A Cool Place is released on Strikeback Records on February 20th.