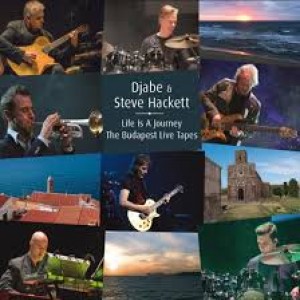 LIFE IS A JOURNEY, THE BUDAPEST LIVE TAPES

Life is indeed a journey are here are two musical entities determined to make the most of it.

An unusual combination – top Hungarian jazz fusionists and the guitarist  always associated with Genesis yet with a much wider CV to his name, Steve Hackett. The latter point is perhaps the key to why the combination works. Whilst the past five years have seen Hackett taking up the challenge of carrying the Genesis flame with his Genesis Revisited extravaganzas, he’s noted for the variety in his work from classical acoustic to orchestral, blues and rock albums. The Sardinia Tapes took the best of his improvised sessions with Djabe, committed them to tape, took them on tour and now we have the results from that road trip.

The partnership is very much a labour of love. No attempt to churn out anything that might fit a more commercial or mainstream path, just the coming together of two artists who have that shared vision of creation without boundaries or expectations. The two do have some history going back a number of years with Hackett joining Djabe as special guest on a regular basis. Not bad when you can get a new guitarist in the band of his stature – the guys probably can’t quite believe their luck and it seems to be mutual. Free of being the man whose name is on the ticket and dissolving into being part of a band again seems to suit Hackett and he lets loose on several occasions in the sort of animated expression he rarely expresses in his own shows.

Almost naturally, there’s a nod to Hackett’s own work with a mid set diversion into his own material and some Genesis classics. They do a splendid hit on  Please Don’t Touch which he rarely performs these days and while Hackett’s own band are now a well established and l well oiled long term outfit, it’s good to hear the Hungarians add their own spin while remaining respectfully within the boundaries.  Their jazz backgrounds offer something a little more relaxed which might be passable to the Hackett fans who are going to dip into this set and who are used to the broad spectrum his work encompasses. How much he suits the jazz style or how much the Hackett crew will enjoy what Djabe do is debatable but the attraction is how they work up the Hackett diversions. On the other hand,  the Djabe crowd would surely enjoy the rock injection that Hackett gives to their band.

Several moments stand out – Hackett duelling with the trumpet as he does with Rob Townsend from his own band and how can anyone not fail to get excited about Fly On A Windshield? Tony Banks has often called the moment that the band come in on that track as perhaps the key moment of the Genesis catalogue and it rarely fails to disappoint.

The DVD includes the full set plus some added documentary/music video extras on an interesting diversion for both artists who may swallow up some crossover fans in the process.

Watch some extracts from the live show here: