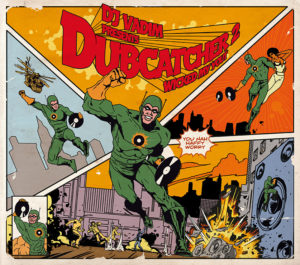 Russian vinyl botherer and producer DJ Vadim has pulled in some serious reggae talent on his 11th album, and Joe Shooman finds that the result is a very cool meander through the ages and variations of the genre.

It all kicks off with a double whammy of Demolition Man’s classic pipes on the rootsy Fussin N Fighting and the dubby Sometimes, featuring Inja shouting out to the people struggling to rise from dark situations. The mariachi trumpet, married to the smooth chorus vocals, provide a subtle counterpoint to the rapper’s imploring flow. Sultry dancehall’s the order of the day for Call On Me, with Eva Lazarus pushing out a proper earworm of a chorus that plays beautifully off the Jamaican-accented Brummie spit of Serocee. Three tracks in, and Vadim’s already traversed several decades of musical development whilst keeping the narrative pleasingly consistent.
Murder Murder channels the spirit of Damian Marley for a politically-charged reggae hip hop rampage, then the unmistakable voice of Max Romeo pops up on Judgement, a fire and brimstone cut in the great tradition of such offerings. It also showcases one of the main themes of this release: the bringing together of cultures and musicians. Abstract Rude and YT provide rap responses to the veteran, with the production lightly upgrading the familiar sonics with a few echo-electro flourishes here and there.

There’s also a place for Vadim to play with more contemporary sounds: Originator’s bass loops, samples and jungly vocals give a kinetic push and Rubberdub Soljah is a irresistible slab of fast-tongued hip hop, skipping between General Levy and Govenor Tiggy’s swift, spiky spitting. Run Comes Massive is more of the same, with Katherin De Boer slinking in a honey-riff chorus that counterpoints with Big Red, rapping in English and French. Red also pops up on Inner Lite, this time working off the vocals of Pupa Jim in a spacey arrangement that gives him plenty of room to work. The genius of that track comes when Vadim double-tracks parts of the rap, making for some fascinating natural reverb/echo effects.

Hey Hey Hey’s hook is huge, Favourite Mistakes rubs along niftily with Iva Lukkum up front and Ruling Sound’s neo-jungle riddim bumps and grinds round the edges pretty spankily. The big bass rumpus comes to a conclusion with the multi-hop showcase of They Don’t Love which has no less than seven different vocalists listed. As they pass the mic round each new timbre brings a different shade to the piece; a risky strategy that pays off in a fitting finale
It’s not all perfect: Good Vibes and Shine Ya Lite feel phoned-in and Music Soljah is pedestrian, particularly in comparison with some of the highlights. To be fair, that’s also testament to the generally superb quality of the set so there’s a lot to live up to.

Vadim’s insistence on working with this multitude of musicians has provided a platform for an album on which the quality is maintained by the sheer variation in vocal artists whilst the underlying beats and treats are coherent . The cover art, portraying the DJ as a superhero – The Dubcatcher – is appropriately self-aggrandising as well as tongue-in-cheek. Like artwork, like album: make no mistake, this is a confident and musically intelligent artist having bundles of occasionally dirty fun.