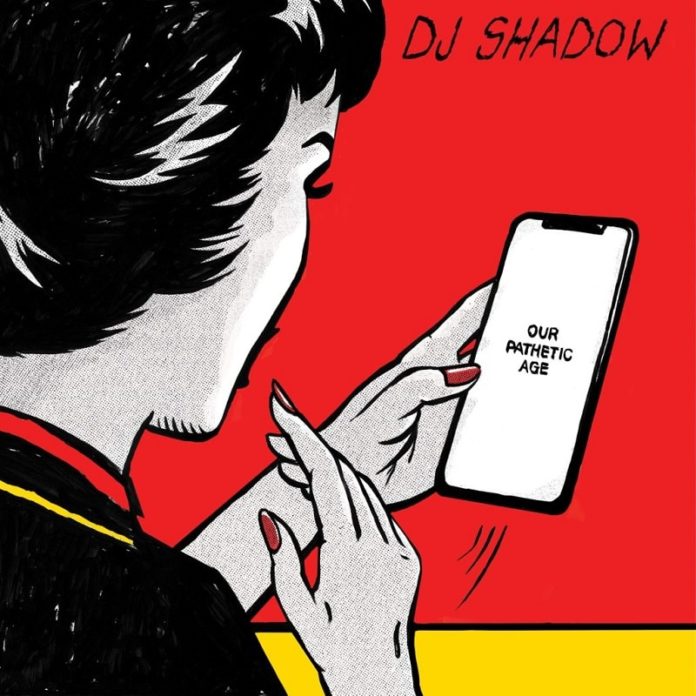 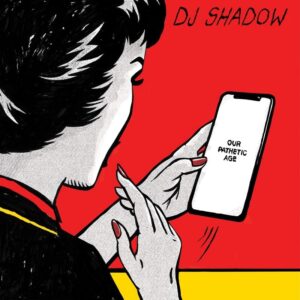 The hiphop innovator DJ Shadow returns with a new double album of eclectic sounds, styles and collaborations. What can we make of this new heavyweight slab of vinyl? Dave Beer tunes in for Louder Than War…

A warped world reflected in shiny black vinyl. Like the age it sonically documents, DJ Shadow’s new album, Our Pathetic Age, is harsh in places and hard to comprehend in others. It’s a record of catacombs, a record to get lost in.

The rapid changes of pace, tone and sound are disorientating. That seems to be the point. Our Pathetic Age is an attempt at capturing rather than explaining our mediated and tumultuous times. On that count, it is a brilliant piece of art.

There is a magnum opus feel to the record. A weighty tome. A hefty double album. Self consciously created to be big and unwieldy. The 22 tracks are split across two parts, the ‘instrumental suite’ and the ‘vocal suite’. The vocal suite is comfortably stronger of the two, containing what feels like the more structured and developed material. The pieces in that second half are pulled into some order by the gravity of the songs. The ‘vocal suite’ includes a wide range of collaborators – there are twenty in total – and so the variety is sustained even where a bit more structure is added. Echoing the music, the lyrics narrate the same features that the sounds seek to capture – from the distraction of screens, the manipulation of behaviour and hyped-up consumption to the politics of media and the mediation of politics.

The music is tense and fraught. There is no attempt to soften the blow. And so this can be a tough record in places. A disorientating and disjointed listen. It’s hard to know what is going on. Despite its length, these are rapid cuts that jump in and out of the unsettling soundscape. The record occasionally settles into a groove without ever quite relaxing. The pulsing single Rocket Fuel is one of a few moments when we find ourselves are on more solid ground.

Our Pathetic Age might not have quite the same analogue warmth as some of DJ Shadow’s earlier works but it retains the montage. The audio pallet is very broad, incorporating and layering all sorts of sounds. The collages are pieced together from excerpts, textures and samples. Chaotic and even dissonant in places, the record never quite coheres – in that sense it probably achieves its objectives.

This record is clearly an attempt to tackle or document the features and incoherence of our age. It undoubtedly captures something. This record is a sonic documentary of sorts. It soundscapes the period.

Any attempt to document will have limits, it can only tell certain stories. Our Pathetic Age records the fragmentary experiences and disorientation of highly mediated cultures – the mass of bits that surround us, the confusing array of stuff and so on. What it doesn’t document so well is how people manage to negotiate those fragments, how they piece the bits together, how individuals and their algorithms arrange and rearrange all these bits into something that feels more solid. Maybe this negotiation of information is what DJ Shadow hints at when the sounds solidify into arrangements. Although, this might be reading too much into it, perhaps.

The problem is that by attempting to reflect the times this Our Pathetic Age is at risk of adding another layer of overwhelming and disconnected information. By documenting and capturing, this album could easily end up extending and exacerbating. The danger would be to simply add more to the mediated noise instead of cutting through it. There is enough smoothing of the fragments in the ‘vocal suite’ to resist the album becoming a part of the disconcerting mass of information. The album is undoubtedly a sonic documentary of the tensions of our times, which inevitably means that it is far from easy going. Yet it is still an album that we can distract ourselves with, it is so vast that we can explore its recesses for hours without looking up.

There is an interview with DJ Shadow about the making of this album in the Q magazine podcast series.