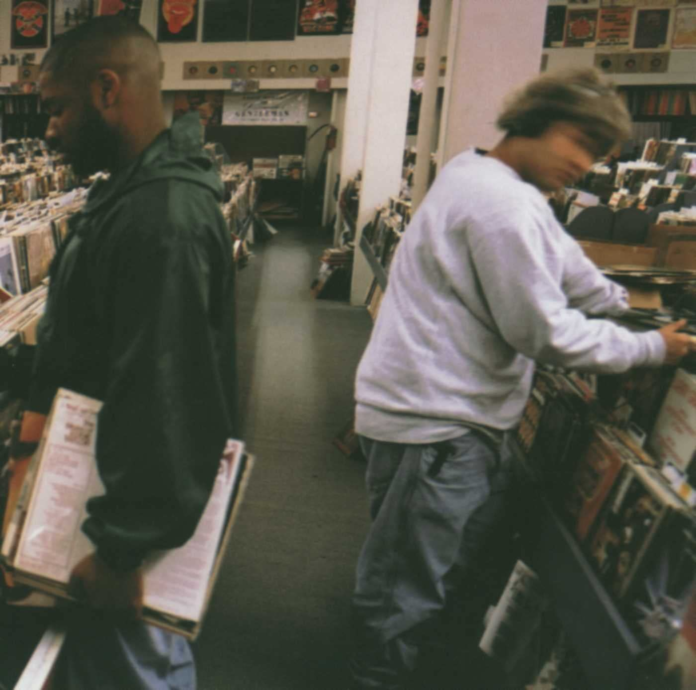 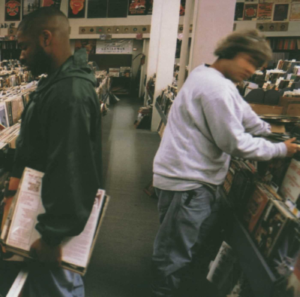 DJ Shadow’s 1996 album Endtroducing wasn’t so much an LP as a cultural moment. On the 25th anniversary of its release, Dave Beer listens back to its undulating beats and is surprised to find a record that seems to capture something of 2021…

It feels slightly strange to be trying to write a retrospective of a 25 year-old album that really sounds like it could have been released yesterday. Time has not aged it. The dust has not settled, the tones never faded. Released in September of 1996 on the Mo’Wax label, DJ Shadow’s Endtroducing is an evergreen of the musical landscape. The album came about after James Lavelle, the head of Mo’ Wax, contacted Shadow offering him a home for his music and encouraging him to continue with his experimental style. That offer was quickly accepted and, five years after his first single release, resulted in an expansive and undulating album that, as DJ Shadow described it at the time, ‘applied old lessons to 1996’.  Listening back, the record seems to transcend that moment. The chaos and overwhelming information of modern life are captured in its carefully crafted tracks. The fragmentation and rush of modernity are plastered all over its intricately sampled collage of audio clippings, giving it a timeless quality.

At its core, the vitality and energy of the record remain its attraction. It has few limits and seems to revel in ignoring boundaries. It excitedly bounds around the musical landscape with little sense of convention. Anything can become a resource for making good music. The energy is important but it never feels out of control, the composition of the parts shows a deft touch. DJ Shadow has talked in terms of the album being in part a ‘collage of mistakes’. It may feel haphazard in places, yet there is a careful hand directing the mix. There may be some serendipity going on, but it is attentively martialled into an album of great coherence.

Clearly this is album that emerged from a well-established heritage. It is hard to track its many influences, the roots just get too tangled. Like the sources of his samples and sounds, DJ Shadow’s inspirations stretch widely. As a cocktail of genres, the stylistic references are just too deeply piled to be counted. Above a list of some of these influences, the sleeve notes acknowledge that the ‘album reflects a lifetime of vinyl culture’. It is full of these traces and there is a strong sense of a genealogical heritage in its innovations. 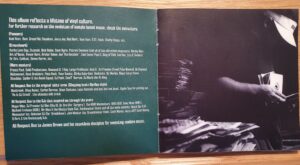 The striking thing about Endtroducing is its limitlessness. The sonic collage is full of all sorts of textures. Crackly spoken word snippets, lush vocal samples, slick scratching, punctuated riffs, clipped keys, rolling sub-sonic bass-lines, far-off loops and dispersed sounds echo across the tracks. Crates of dusty vinyl records take a musical form. There is so much gathered in here. All of this is set to a backdrop of shifting and sometimes unpredictable beats.

Spiky shards are peppered all over the canvass. It is an impatient record, it can’t wait to deliver the next line, the next loop, the next idea. DJ Shadow packed enough ideas for several albums in this one collection. As a result it probably isn’t an album that feels instant, instead it draws the listener in to its textures. I can’t really recall what it was like listening to it for the first time, I imagine it was slightly disorientating on the initial spin. It takes a little time. It is, after all, an album of depths. Listening back and zooming in, there seems to be more to find.

Always on the move, the many movements within the record form into one long piece of music. When I sat down to write this retrospective I thought I’d say a little about each track, breaking the record into its 13 component parts (plus the three ‘transmissions’) to give glimpses of each. The problem is, as I listen, I can’t really tell where one segues into the next. I’d need to look at the CD player screen to work out which part of the record I’m actually listening to. I could pretend, I could pick out track names and say something about each, but that might be misleading. Breaking this record into its bits would be to miss the point. It was never a record to be listened to in parts. It may be constructed out of innumerable small samples, at the same time it is intended to be listened to as a whole.

It’s not just the technical assembly of a plush collage that makes Endtroducing such an interesting and enduring record. It’s the affect that DJ Shadow was able to create by assembling these pieces together. As he once put it, the ‘sampler is his instrument’. He approaches these devices as a musician, seeing them as a tool for expression. Through this device the listener is transported in all sorts of directions. There is not one overwhelming feeling, other than perhaps being unsure where you will be taken next.

In its mix of styles and tones, the music feels like a maelstrom of expressions. Capturing a cacophony of emotions, it moves between quite vulnerable and soothing moments into more chaotic, noisy and strident territories. Often these sit side-by-side. As a pick-n-mix of sonics, it brings a readymade set of emotional wanderings. DJ Shadow is a flaneur of the decks. Striding without a fixed destination, he savours whatever musical scenery he encounters.

We might wonder why it is worth revisiting music from the past. There is always the risk of nostalgia. Yet, sometimes looking backwards is really about trying to understand what is going on now. Like any artefact, music can tell us something about both the past and the present. When you look back you expect to see change. You expect to see something that looks out of place, that hasn’t been able to keep-up. What’s staggering is when you look back at something and it feels like it hasn’t aged at all. Of course, recorded sound doesn’t actually alter, what changes is the perspective from which we hear it.

Listening again, like I did back then, I’m wondering if Endtroducing is actually far better suited to the disorientation of 2021 than it was to the moment it dropped in 1996. As a collage, like DJ Shadow’s recent album, it seems suited to times of turmoil and uncertainty. There is something about this expansive layering and sonic constellation that fits with the fragmentation of these times. It offers a fitting soundtrack as we switch between YouTube clips, social media notifications, news feeds and streaming platforms.

As we try to piece together the fragments of information around us, Endtroducing feels like a suitable soundtrack. Even after all these years, as DJ Shadow pulls another sound in from stage-left, the listener isn’t quite sure what will come next. There is always something else to find, something else hidden amongst these scraps of torn up culture.

Looking back isn’t always about nostalgia, it can also be about finding art that helps us make sense of today. As a record that sounds like it was made yesterday, Endtroducing tells us as much about the present as it is does the past. It tells us that fragments can be assembled into something that make sense without the need to over simplify or to lose the sheer disorientation that our media bring. Maybe that is what makes this record feel genuinely timeless.