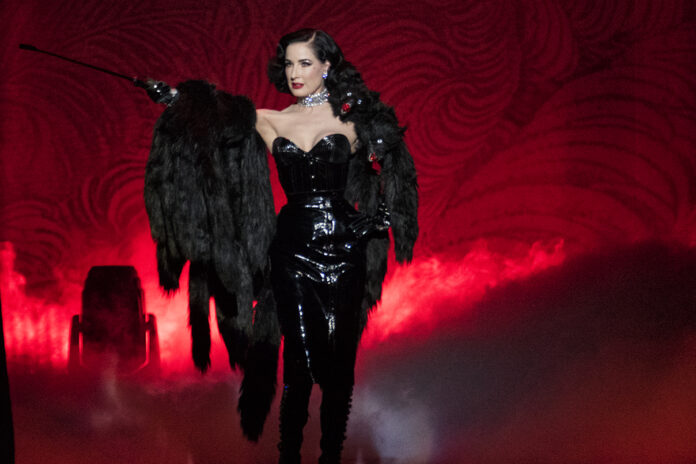 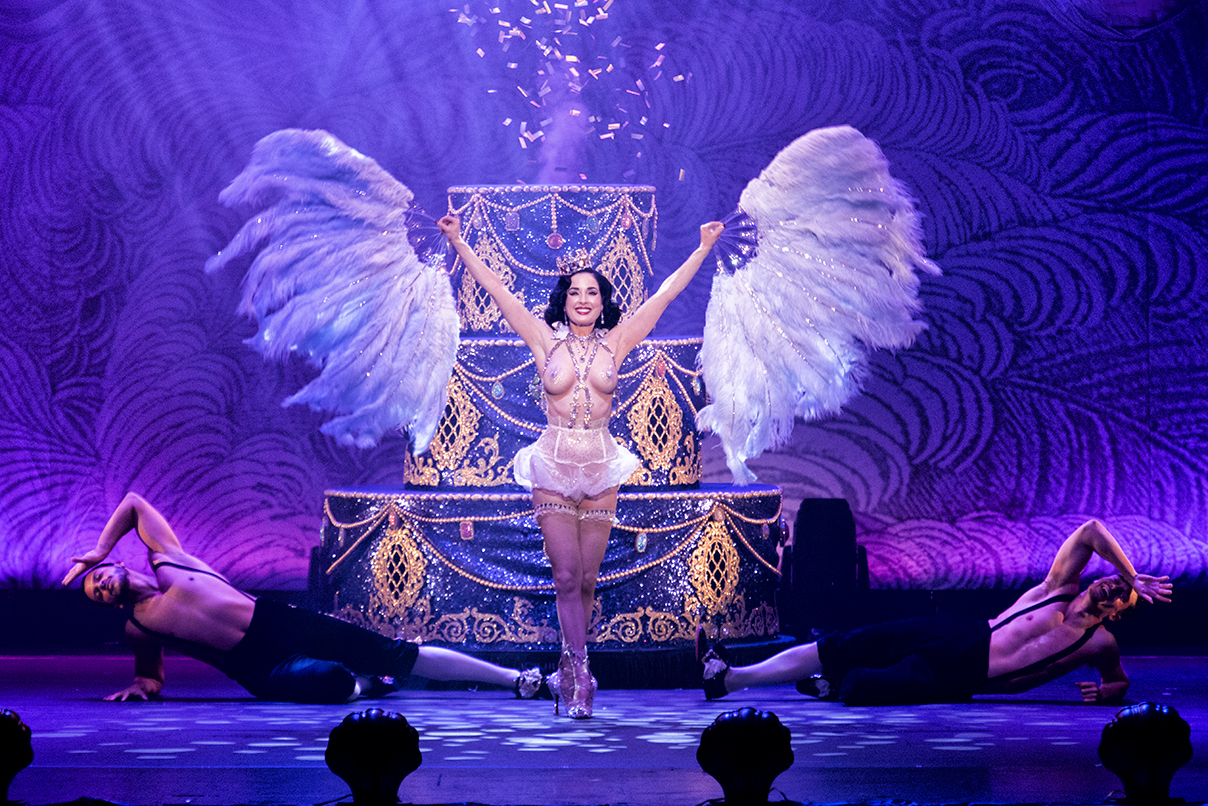 Melanie Smith pulls off her dream shoot, as she photographs Dita Von Teese’s exotic burlesque show. Dita stopped off in Manchester on the first night of two razzle-dazzle shows, following sold-out nights at Birmingham and four nights at the London Palladium. Glamonatrix is the follow up to the most successful burlesque tour of all time – The Art of the Teese.

The anticipation is palpable, it’s been a two-year wait for this show to come to Manchester, due to covid restrictions and finally, here we are. I am standing in the foyer with an all-access photo pass in hand, trying to be cool and not appear too excited, inside I am like the cat that got the cream, ready to photograph the legendary, finest tease queen of our generation.

And look at the beautiful guests, all glammed up in their finest attire, sequins galore, glamour dripping from head to foot – it’s vintage city. It appears we have quite an array of our local burlesque artists in the house as spectators – Lady Wildflower, Baby Daisy, John Celestus, Aurora Nova, Cherie Bebe to name a few. I’ve positioned myself at the rear-central, so have a great view of proceedings. We have a compere for the night, Jonny McGovern (stand-up comedian, musician and podcaster) his character is known as The Gay Pimp. He is here to regale us with his witty repartee throughout the show in between acts.

The grand curtains part and Dita surprises us by peeking out of the top of a huge tiered cake. She’s dressed like a burlesque queen, wearing a crown, peering through opera glasses and blowing kisses, whipping the audience into a frenzied whooping, accompanied by her Vontourage guys, who are dressed as royal footmen. They slowly attend to Dita, undoing her corset ties in the most creative of ways, revealing a glittering diamante ensemble. The set ends with a display using huge ostrich feather fans, like a dream sequence; she’s an astonishing sight to behold, such beauty and gracefulness. 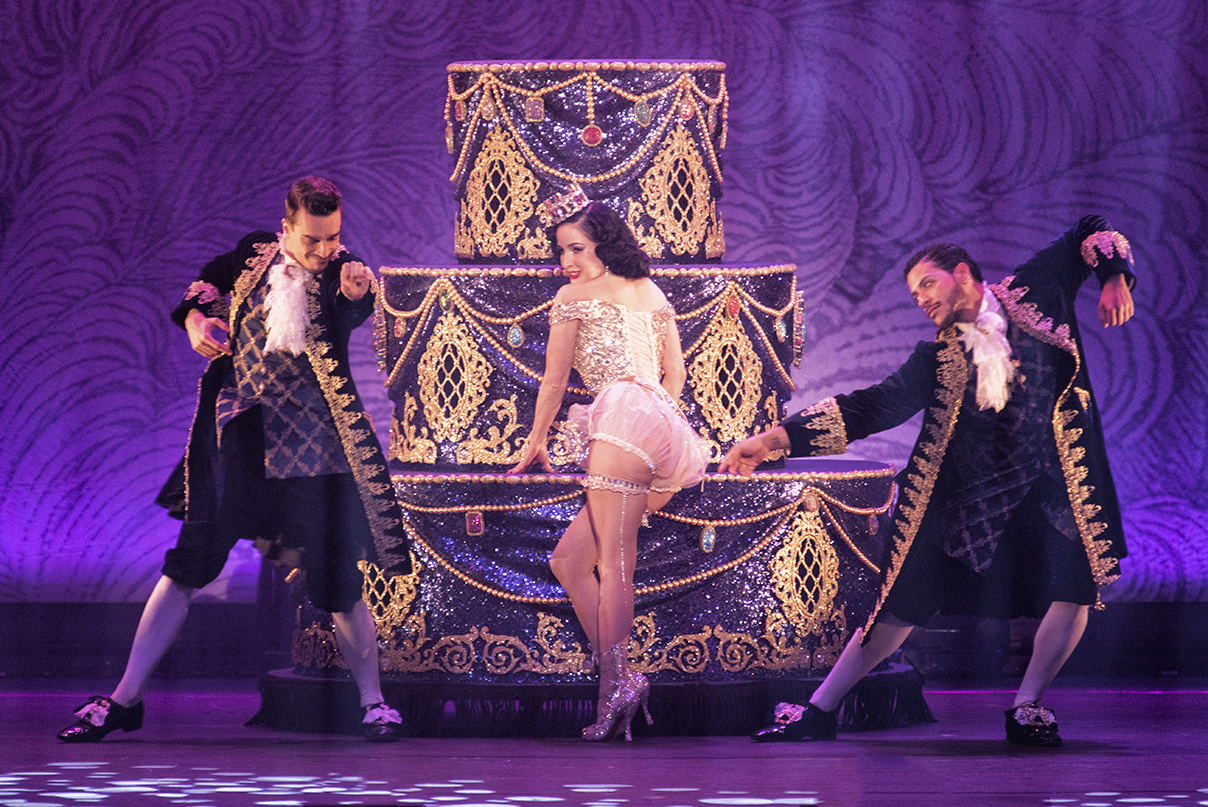 “Women don’t have to apologise for our sexuality or for finding ways to make burlesque inspiring and empowering.” Dita Von Teese – Big Issue North 2020 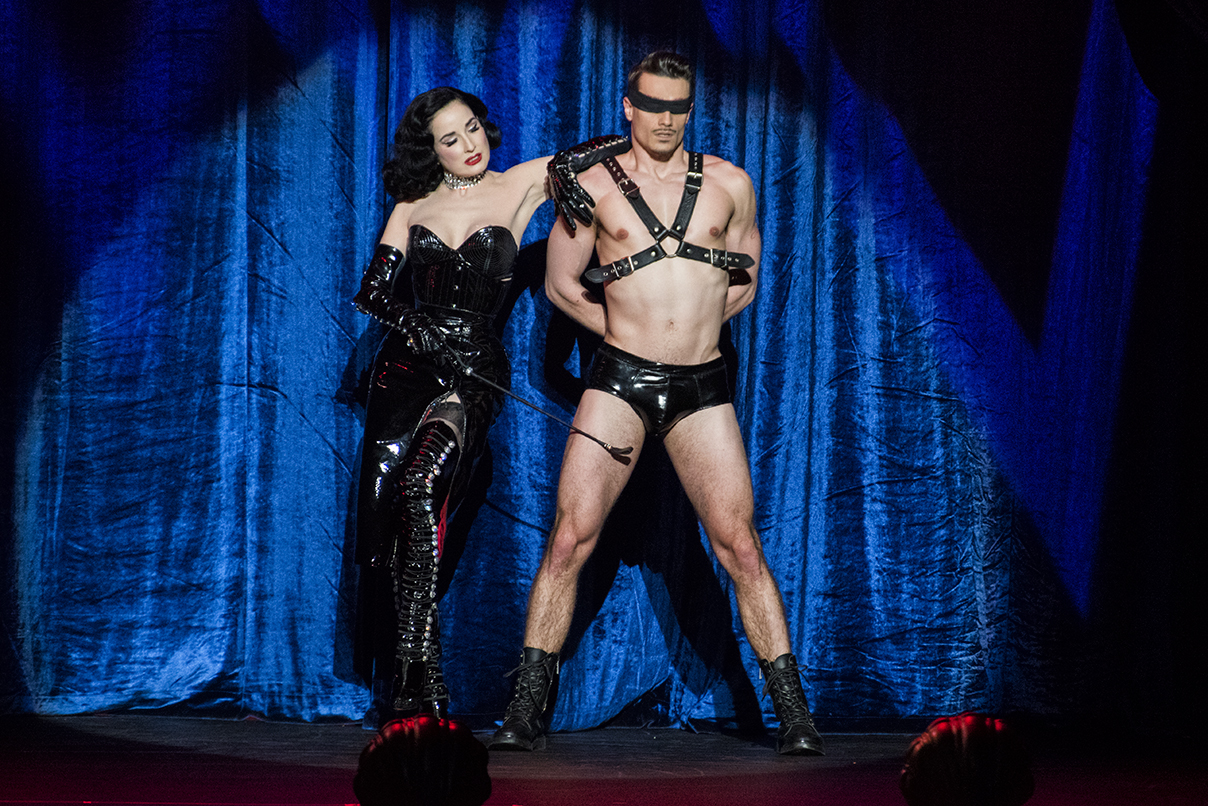 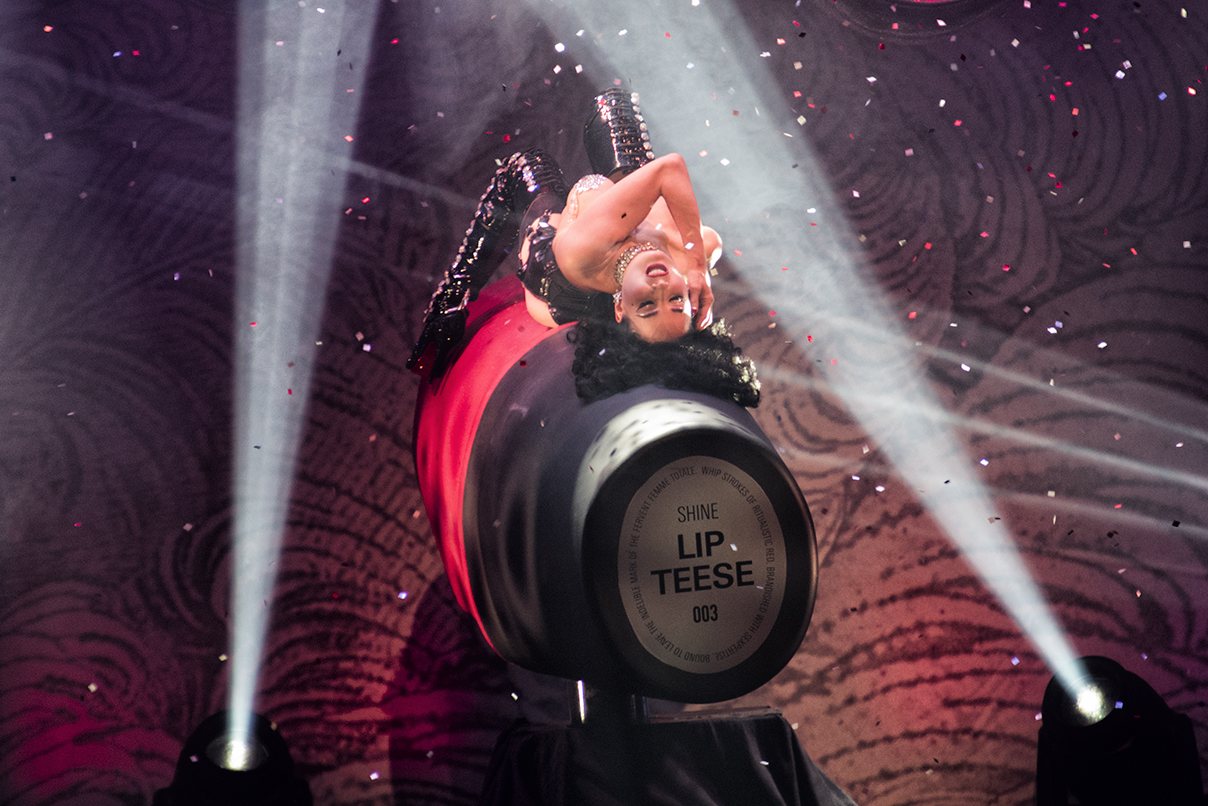 Following this, the lights turn red, Dita the circus ringmaster arrives on stage in a gold carriage fit for a queen, with her caged wild cats and circus troupe. She guides the cats on a leash, then a training exercise, and they break away to perform an amazing duet on the high pole.

We have an array of super talented guest acts, who appear in between Dita’s breathtaking performances. Làszlò Major, who appears like a modern-day Fred Astaire, erupts into a pole dancing aerobatic strip act. He also appears as a big cat tethered by Dita the ringmaster herself much later. Toscacyr is an incredible performing aerialist, focusing on a large hoop and as another of Dita’s tiger cats.

There are classy male strippers, like dancer Jett Adore in his full monty camp Matador act, which is highly amusing and artistic. Lana Fox is the stunningly beautiful dancer, whose performance is akin to watching a reincarnated Josephine Baker. The last of the guests is the voluptuous Dirty Martini, in a shockingly bright yellow outfit, reminiscent of Mae West, who does a great line in nipple tassel-twirling and shaking her bootie, with a delightful sense of humour that has the crowd roaring with laughter. They love her.

The final Dita performance is the best yet; the famous champagne glass, featuring a newly designed glass by Catherine D’Lish. Dita appears with her troupe of dancing males wearing top hats and tails, they slowly unpeel her clothing; as she delicately steps into the glass, posing slowly and provocatively, she showers herself with water, erotically it cascades over the edge. A bathing beauty. 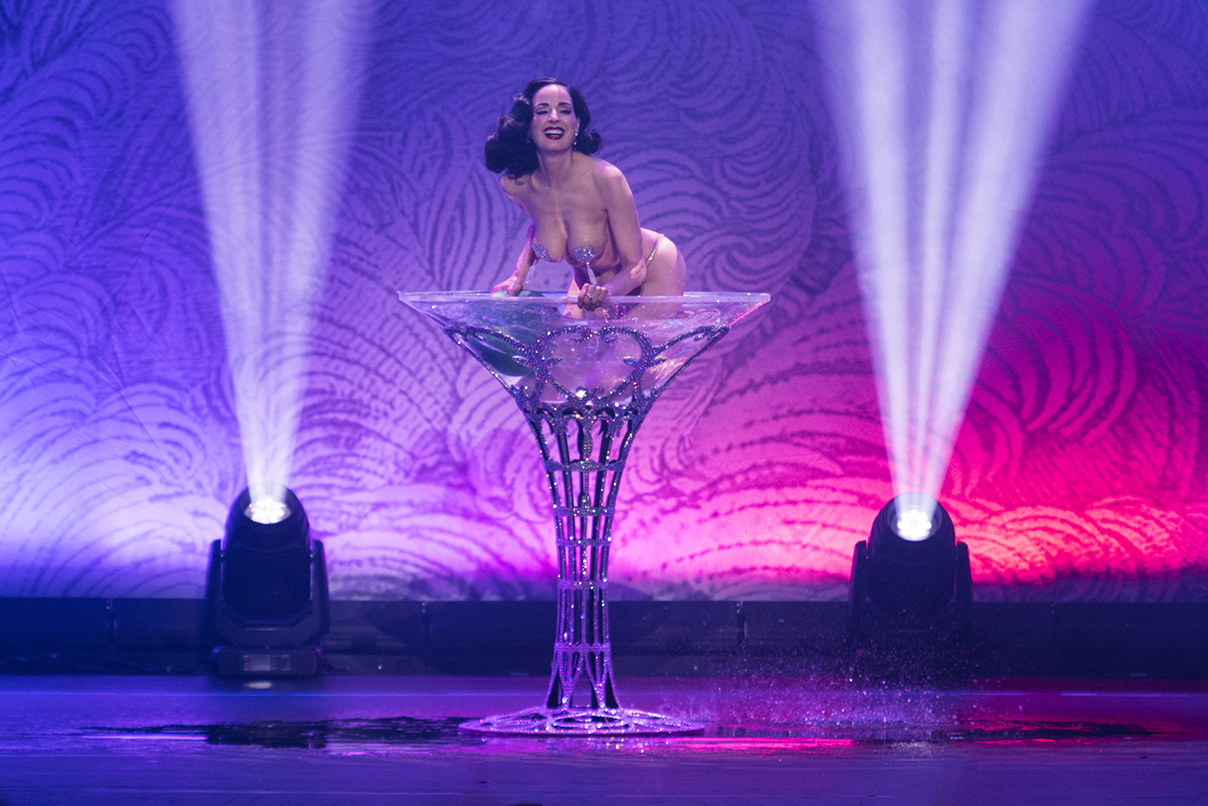 The choreography is out of this world, the lighting is jaw-dropping. The lavish costumes are incredible – designed by corset maker Mister Pearl, Jenny Packham and burlesque icon Catherine D’Lish – and bespoke footwear by Christian Louboutin. The stage sets and dancing is top-notch. It literally is like being in another world and this high-class show featuring the crème de la crème of the burlesque world is much like a night at the Folies-Bergère, Paris. If you get a chance to dress to impress and spend a few hours in Dita and her glamourous friend’s company, you won’t be disappointed. 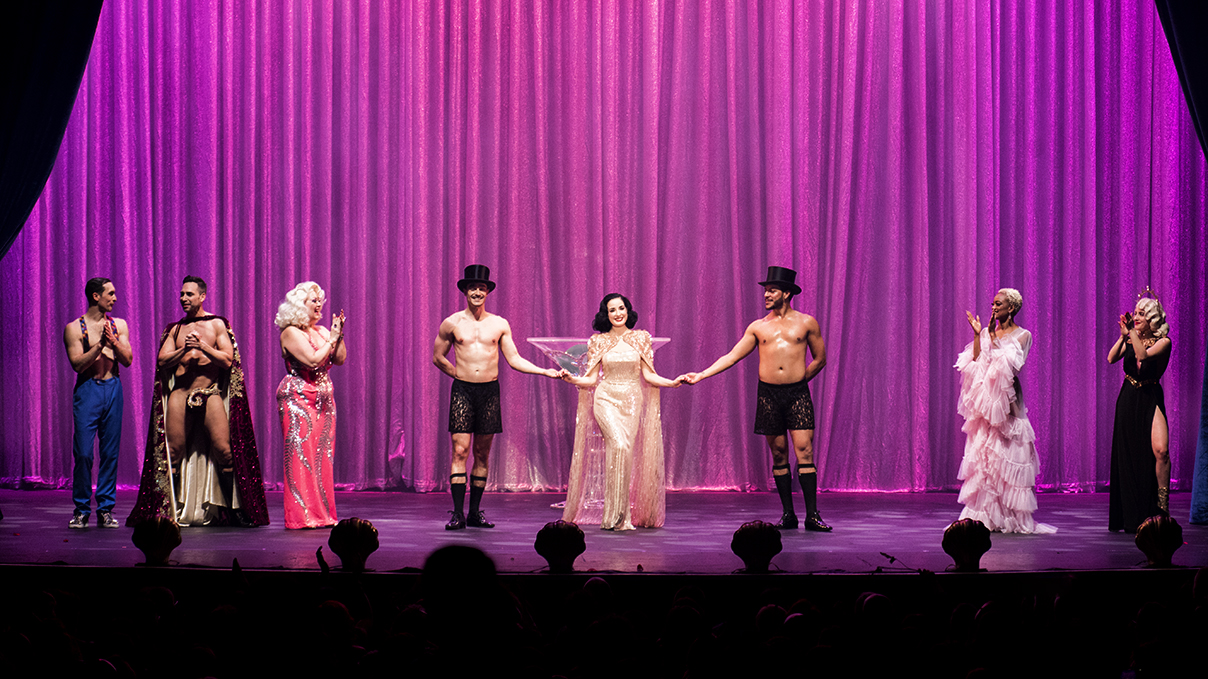