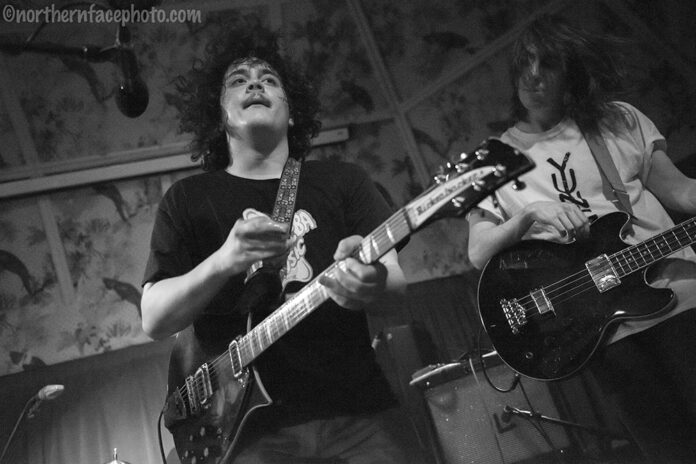 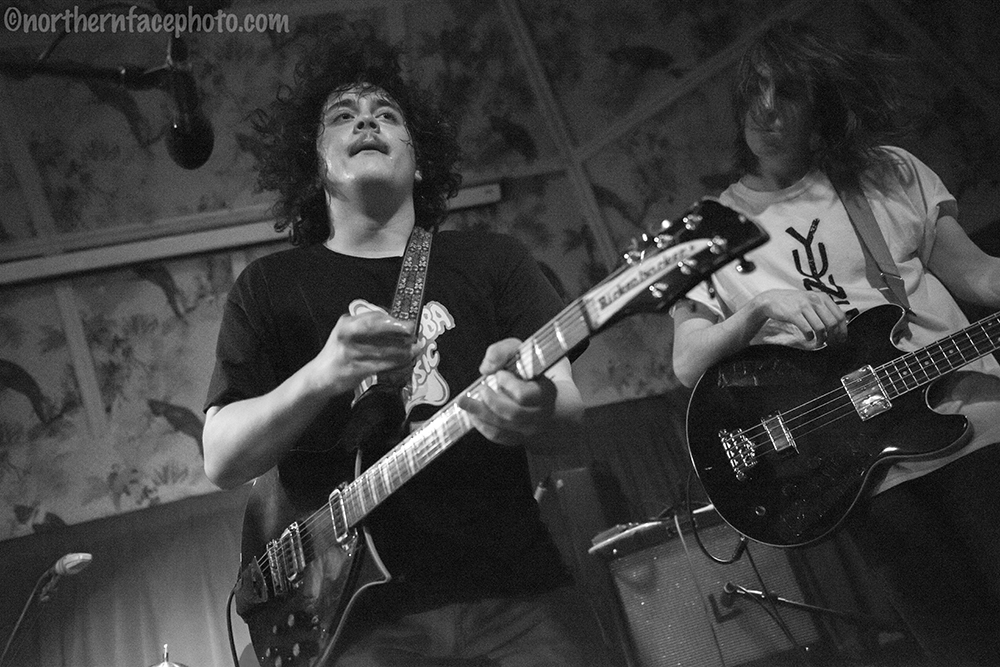 US band The Districts hit Manchester supported by Broncho on a night of peace, love and understanding – Nigel Carr (Words) and Dave Gleave (Pics) were there to capture the event and report back below.

The Districts breeze in to town playing a gig that that is so full of warmth, love and emotion you’d swear that big glitter ball on the ceiling had transported you back to the sixties. They hit the stage after Broncho who have been supporting the band since Berlin on the 16th April. This Indie / Rock outfit who hail from Oklahoma, home to The Flaming Lips, are a great opening band lining up at the front of the stage and just blowing the audience away,. They close with Class Historian which singer Ryan Lindsay dedicates to the headliners. It’s kooky, (see, there’s that sixties vibe going on again), in a Weezer type of way with Lindsay’s unique high warbling vocal over the top – he stands on stage shaking his shoulders like Joe Strummer whilst barely moving his lips; pretty unique and a song I can’t get out of my head!

This is the last night they play together and he’s genuinely sad to be leaving the tour. I have a brief chat with him between sets and he’s just overjoyed to be sharing this leg with them telling me what ‘great guys’ they are to hang around with.

The band from Lititz, Pennsylvania released their second album ‘A Flourish And A Spoil’ in February of this year and are described as an ‘indie rock band’ but there is much more to these young guys than that. There’s folk and even psychedelia in there; think The Mumfords new electric sound meets Dinosaur Jnr with a sprinkling of the aforementioned Flaming Lips. It’s a primordial heady mix of styles and is honestly something pretty unique. Rob Grote is a super nice-guy front man, big shaggy hair, the sweetest of smiles and a voice of that sounds remarkabely like Ron Sexsmith.

They open with Lyla from their 2012 debut album Telephone – it’s preceded by a short psychedelic tune up that lead guitarist Pat Cassidy layers with various effects pedals. This is a common theme to the night – extended opening pieces building in to huge crashing freak outs before halting abrubtly as the band break in to each track. 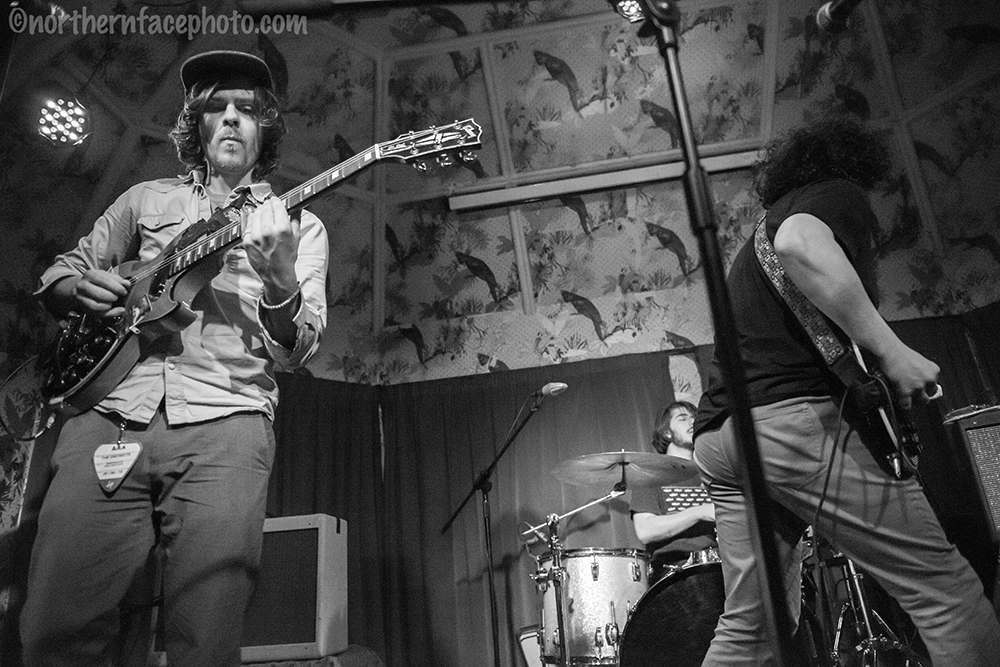 They follow with Rocking Chair and you can see how much the band enjoy it with them dancing hillbilly style round the stage like they’re on their front porch, bandy legged, almost crashing in to each other! This is a big song with a huge chorus and soaring guitars; someone shouts from the audience ‘Rock’ and Grote replied ‘We Are’.

“What do you think of Broncho? “ Cassidy asks the crowd, “I have them taped to my guitar, I love them so…..”, and he points to a picture of the band!

They pretty much rip through the whole of the new album including Chlorine and the epic Peaches, which sees parts of this mostly well mannered crowd slamming at the front of the stage during the huge rock out chorus.

There is a rather over extended psychedelic guitar lead section after which Grote turns down the tempo, grabs an acoustic guitar from behind the amps and kind of aims it at the audience as he sings:

“Our sons are strong and they are able, To laugh and watch the retard dance” from Surburban Smell. By this time his pale beige chinos are pretty much drenched in sweat, oddly converging around his knees! 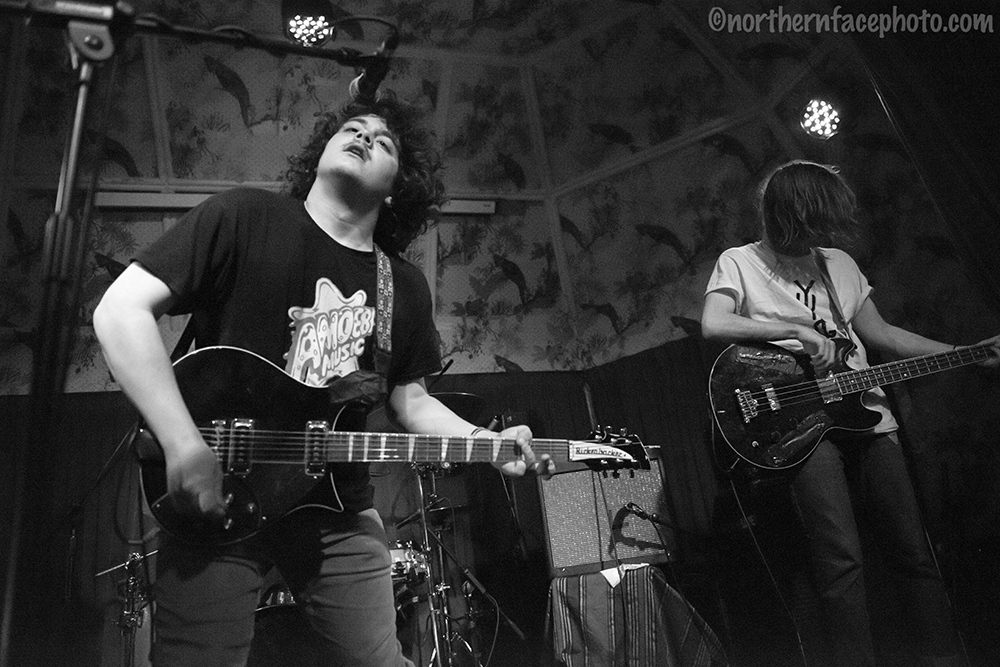 Funeral Beds gives the biggest reaction of the night. It’s probably the best known of The Districts’ tracks and the one that gets the most airplay. It opens slowly with a breezy mouth organ building into a monolithic piece, culminating in a huge crescendo which sees the audience going wild.

They close with the uptempo 4th And Roebling which is a good-feeling singalong with the auditorium ringing to the sound of every word. There is genuine excitement, roars of appreciation and smiles all around as they leave the stage.

The encore is amazing as the crowd is treated to the electrifying Young Blood; an epic song with wailing guitars and the biggest of chorus’s – it’s a majestic end to a cracking gig for this young band, still only 19 and 20 years old and I’m left thinking ‘if they are this good now..?’

The Districts ended their European tour on May 2nd in Dublin.