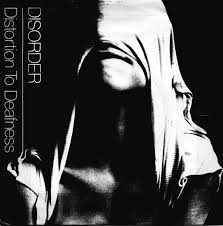 2CD anthology focussing on the early years of Hardcore/Cider Punk trail-blazers, Bristol’s very own Disorder….LTW’s Ian Canty tries to look past “the image” and concentrate of the music – the question being could they be described as Hardcore Punk’s Hall Of Mirrors?

On the face on it Disorder were the 80s Punks that made GBH look like a minor misdemeanour and Anti-Pasti like a mere starter dish (er but that’s what it means….). But time and your ears can play terrible tricks on you, so it pays to approach these things with a fresh mind. This new collection brings together a singles compilation “The Riot City Years” (actually a misnomer as they never recorded for the label, vetoed by Vice Squad who later sent them and Chaos UK up something rotten as Chaotic Dischord), their debut album (1984’s “Under The Scalpel Blade”) and their tracks from a 1986 split release Kafka Process (“One Day Son All This Will Be Yours”). Prime “UK82” Hardcore Punk with nothing in the way of frippery? Maybe, but we will see……

The first thing I saw of this collection was of course the sleeve, the clear font and oblique photo lifted from the original 1981 EP in retrospect look far more “Post Punk” than “Punk’s Not Dead” – no blackmail lettering or studs and leather on display here. Maybe this is a sign we should look again at Disorder for a moment disregarding the Cider quaffing UK82 clichés that they no doubt played up to a bit? Perhaps, just perhaps, Disorder were not quite the heads down, one-dimensional hell for leather merchants once supposed? Let us remember Bristol has a long and brilliant history of Post Punk and musical experimentation, starting with the Pop Group and working through from the huge and talented Reggae scene right up to artists like Tricky and Portishead. Now who is to say that Disorder don’t belong in there somewhere along the line? Ok so for the most part they were the straight-ahead but not straight edge (not with their cider intake) Hardcore Punks they appeared and I’m not trying to reposition Disorder as some kind of idiot savant Post Punk saviours, but let us give them the benefit of the doubt for a while that there was something to their art lurking below the surface.

To that end, I remember reading an interview with Disorder way back in 1981 and I think it was in “Flexipop” of all places. Anyway the point is I seem to recall that Disorder guitarist Steve Allen was very much in the thrall of John Lydon and the words used were something along the line of “I still think he can do no wrong” (remember this was in 1981 and the butter ads and “I’m A Celebrity” were still decades away). Now it isn’t too big a leap of faith to suggest some of the Public Image attitude may have seeped into the band and had a result on their sound (hang in there with me on this one).

If we take the song “Complete Disorder” (from that first EP) in isolation, on one level superficially you could see it as just another fast Punk rant, but it’s so distorted it isn’t really that different in appearance from “The Cowboy Song” by PIL for example. Whether it is by accident or design, by cheapo production or forethought (and I can’t really say for certain myself which it is, but veer on the side of a “happy accident”), Disorder to begin with didn’t actually sound that much like the sort of standard speed Punk that was all the rage at that time. Having said that this first EP is a thrilling high speed and lo-fi ride and the following extended play “Distortion To Deafness” also has its moments too, “More Than Fights” stop-start psychosis and the actually quite catchy “Daily Life” being chief among them.

Just to note here that “Complete Disorder” featured on the first “Punk And Disorderly” compilation LP, an essential document of 80s Punk and “More Than Fights”, the key track from their next EP was on the “Further Charges” follow-up. Disorder at this point of time were carving their own niche of super speed mayhem and as things solidified perhaps a little something was lost. For the while though they continued apace. The third EP “Perdition” had the almost Goth swirl of the anti-war song “Remembrance Day” and the explosive “Suicide Children” which has one of those trebly bass intros Disorder slowly became addicted to (the LP on Disc 2 has plenty). “Mental Disorder”, the final EP featured here, seems to have the track “Maternal Obsession” missing, but elsewhere touches on Chaotic Dischord-style self parody in “Buy I Gurt Pint” and one of their best known efforts, the hyper-speed “Rampton Song”.

By the time of the debut album “Under The Scalpel Blade” in 1984 it appeared that Disorder had settled into their perceived role, providing mostly just what was expected of them. That isn’t to say that their headlong Punk thrusts aren’t enjoyable: “Security Guard” and “The Go Song” are thrilling, but overall the LP lacks much variety that would set it apart. The verse sections of “The Rhino Song” certainly owe a fair bit to “Gordon” by the Cravats, but it’s a pleasant respite from the thrashes, which do wear a bit thin one after the other. The record ended strangely with the easy listening nursery rhyme of “After” and then a devil voice. An odd coda to what was a landmark Hardcore offering for the year of 1984, when the Punk scene was dying on its feet in the UK.

Disorder themselves were, as we have now come to recognise, unstoppable. Their tracks from the split Kafka Process are a little more Metallic and a tad better produced. They would no doubt go onto have great influence on Hardcore bands all over the world in the future, right up to the present day. “Love And Flowers” is the best song for me from this selection with galloping drums and a slight 60s influence in the intro (N.B. I did notice that the track listing on the sleeve is not quite right – I think track 3 is actually “Love And Flowers”, 4 is “Togetherness and Unity” and number 5 “Marriage Story”.) Disorder went onto after this to have a long career with a revolving door line-up, but this compilation sums up their early years well and sometimes gives us a picture a little different than what we may have expected.

What you get here is an interesting time capsule: the split and LPs on Disc 2 are ok if a bit samey, but the singles collection shows us that before things became set, Disorder had a real spark about them.