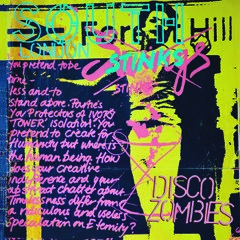 And by the same token, every band, no matter how obscure, had at least one truly great song.  Leicester student punk band, Disco Zombies had ‘Drums Over London’. A total classic. Misunderstood by some who it was aimed at… but up there with the Ruts and Stiff Little Fingers in terms of incendiary punk debut 45’s.

I remember hearing it on John Peel and the chorus sticking fast in my head.  Like White Riot before it,  there were some who perhaps wilfully misinterpreted the lyrical content.  It was pretty obvious that it was satirising racists, but Rock Against Racism asked Peel to ban it apparently, but he set them straight.

South London Stinks is a beautifully packaged 20 track collection of all of the bands work spanning songs written in 1977 to ones recorded in 1980.  Chronologically ordered you can hear how the band progress from naive ‘power-pop’ punks to a forward-thinking, serious post-punk band. And they were by no means a one-song band. There is so much here that takes you back to the good old days of three TV channels, shit wallpaper and impending nuclear war.

They were perhaps, doomed to have a short life-span as a band when they settled on the name ‘Disco Zombies’. It was just too disposable and tacky for a band who went over to cover serious topics. (There is no way U2 would have become U2 had they been called Disco Zombies.)

The earliest songs had obvious targets as subjects for teenage punks: Disco, Television, domesticity … and if the planned release of their Top Of The Pops single hadn’t fallen-through they could have beaten the Rezillos to release a song of that name.

There was a previous Disco Zombies reissue but this time on two discs they sound superb for archive recordings and if you have similar albums by contemporaries like the Cigarettes (another Optic Nerve reissue) the Wasps, The Now, The Users – the so-called ‘second division’  – you’ll know just how fantastic these kind of albums are.  Although dated in some ways and ‘mannered’, they still have a spark and excitement which is unbeatable and takes you right back to your early teenage years – when hearing the word ‘fuck’ sung was the height of rebellion (and you just hoped your parents couldn’t hear thru the bedroom wall). Must seem so quaint to kids today…

‘Where Have You Been Lately Tony Hateley’ was an XTC-ish upbeat song – which told the tale of the nomadic footballer. The test pressing gained many Peel minutes but by the time it was ready to release, the band had split up. Says the press release.

All of the tracks on side 3 and 4 of this double album, never saw the light of day at the time, and arguably among the best of the DZ’s material, taking on subjects like the Cold War paranoia and consumerisms grip.

The sound is more garage New Wave (or early XTC / The Skids) than Gang of 4 although dealing with similar ideas.

Greenland sees tanks rolling over London and missiles flying above our heads. Whilst Lenin’s Tomb highlights a fascination with Russia and LHO an interest in American political history (LHO = Lee Harvey Oswald)

The Year Of The Sex Olympics would have got a lot of attention had it been released – the title comes from a 1968 BBC Play – (and I’m sure it crops up in the Manics song decades later) – and it seems to predict the existence of Viagra!

One of the catchiest songs (and there are two versions) is Paint It Red with its cutting opening line: As the Arms Race escalates / We fit double glazing / As we head for Armageddon / we can watch the racing…

Night of the Big Heat has phenomenal bass-playing and drum-machine patterns which foreshadow the Sisters of Mercy. It’s a fabulous step forward musically although (like Scars Horrorshow) it is basically a movie condensed into song form.

The closing song ‘Hit‘ is a vicious takedown of new groups willingness to be moulded and packaged into New Pop formulas, whilst bitter that their own lifespan was coming to an end due to lack of funds perhaps. ‘We’ve got a drum machine, a synthesizer too / the music’s bad but here’s the packaging for you..  Hit!’

Disco Zombies coulda been contenders.  This collection stands as testament to yet another great ‘lost’ band from the much-discussed era.

There were just so-many, too-many bands around all vying for attention that they couldn’t all succeed…(much like today) but it wasn’t down to lack of talent, musicianship and ideas. I guess people like Andy Ross and Dave Henderson just weren’t cut out for the music biz.

Even if you weren’t around at the time but are fascinated by 1977-1980 UK Punk and thereafter, I would say this is still an essential album to fill the gap in your collection between the Cigarettes and The Flys (or the Desperate Bicycles and Doctors of Madness if you’re a completist), and which you’ll get a lot of enjoyment out of as well as a history lesson.

Thanks to Optic Nerve/ Disco Zombies for exclusive access to their videos.  (And yes pedants it is the same footage synced to different songs)