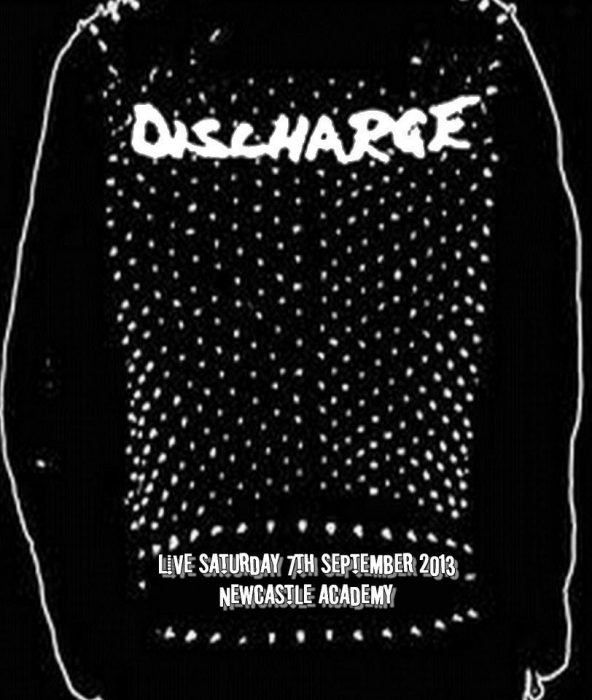 A veritable raft of reissues from the D-Beat titans. Joe Whyte reviews for Louder Than War.

Given the resurgence in interest in Discharge following last years well- received album End Of Days it’s maybe time to reappraise. That album, which reunited most of the original band (albeit in different roles from the Clay Records days) and added J.J. Janiak on vocals replacing Cal Morris who’s return and subsequent retiral has been one of the longest running sagas in punk, was a real corker. In between times, of course, Rat from The Varukers was the touring vocalist which again split opinions among many of  the bands long-term fans.

I vividly remember Discharge first appearing. It seemed that most people that I knew had for the most part lost interest in punk, myself included. The whole UK82 scene (as it laterally became known) pretty much passed me by. Discharge, however, were another thing altogether.

That initial burst of singles and EPs came on like an injection of reckless energy. “Realities Of War” and “Fight Back” in particular were some of the most visceral things I’d ever heard up until that point. A guitar that sounded like a fuzzed-up hot-rod, drums that were on the verge of collapse and Cal’s shrieking vocals with that weird-sounding Stoke-on-Trent accent bellowing opening lines (which to me, still remain unbeatable as an opening lyric and are still very, very funny) like “Ah well you arse-crawling bastard, suck my arse, religion Jesus Christ, It’s all a fuckin’ farce!” among a tirade of swearing and indecipherable words. I actually didn’t know much of what Cal was singing until I consulted the inserts of these CDs some 35 years later.  The single sleeves were brilliant, too. that black and white iconography is a punk cliche, now, but back then, along with the Crass artwork, it was very evocative and exciting. The speed and velocity was another thing, too. Listening to them now, it’s clear that Motorhead was a big influence and with experience of the intervening decades, they actually don’t sound as fast as I remember them. Very odd.

This batch of reissues omits a couple of the albums, perhaps for licencing reasons, I’m not entirely sure. The original band only released one true album, the mighty “Hear Nothing, See Nothing, Say Nothing” (1982) which is one of the omissions. Perhaps that’s scheduled for a later release, I’m not sure.
Anyway, these releases are an intriguing journey through the history of a band that flamed brightly, had one of the most spectacular falls from grace ever and then (after a couple of false starts) returned to the fray almost unscathed.

The two singles/best of compilations are just that. If you’re a newcomer to the world of Discharge, these are as good a place to start as any. “Singles” is a veritable blitzkrieg of fury and anger. “Fight Back”, “Realities Of War”, “They Declare It”, “But After The Gig”; every one a stone-cold punk rock classic. The triple disc “Society’s Victims” compilation is all that and more, gathering up cuts from across the career of the band and including live tracks and songs from 2002’s reformation album, the self-titled and magnificent “Discharge” which I’ll get to shortly.

“Never Again” is also a compilation of sorts. After the band collapsed in disarray following the departure of guitarist Bones, Clay Records supremo Mike Stone, trying to capitalize on the success of the early material, gathered up some old songs, remixed them and added in some material from the two subsequent (and quite short-lived) line-ups that followed. The remix thing divided opinions; why would you try to improve the “Hear Nothing” material? Actually, to be fair, the remixes are pretty good- the sound is sharper, more focused with the acerbic attitude remaining untouched. UK82 expert and author Ian Glasper (if you haven’t read his Britain’s Burning book, do so) points out in the sleeve notes that one huge advantage of the remixes is the clarity of unsung hero Rainy’s bass lines. Rainy is truly one of a kind. The casual way he throws off melodic, thrusting (and quite frankly jazzy) four string thunder a la Jaco Pastorious is frightening. Witness this gig from the 100 Club from earlier this year and pay attention to Rainy’s fingers-

The two live albums here are okay, nothing more. If you fancy a document of what the later line-up (i.e. late 80’s and 90’s) sounded like, they’re pretty good shows. I doubt I’d give them another listen but then, I’m like that with most live albums. The track listing on both isn’t massively different, either; Both one for the hardcore fans, definitely.

“Grave New World” is the one that polarizes opinion like no other. In fact, that’s not true; most Discharge fans hated it. I actually, with the hindsight-ometer on full, don’t think it’s that bad at all. There are some good songs hidden away in there. The cover photo where the bare-chested and long haired  band look like The Cult probably didn’t help, either. This was the thing; it’s seen as a betrayal of their punk roots and a wannabe metal album. As mentioned, some of the songs are good. “Sleep In Hope” and the title track are excellent but it’s the delivery that kills it for most people. Cal sings in a high-pitched, Axl Rose-style voice; being pre-GNR he probably was after an AC/DC kinda thing. It’s actually pretty good if you ignore where they came from; he can sing and it suits the material pretty well. The other (and probably main) downfall is the guitar playing. Stephen Brookes, who was by this time on six-string duties, colours EVERY song with massive amounts of whammy-bar dive bombs and pinched harmonic lead parts. If you’re not a muso, both of these were techniques beloved of Eddie Van Halen and Joe Satriani; a pinched harmonic is that ringy note-bend thing that was very “80’s metal” indeed. They’re everywhere. Every (and I mean every) line of wailing is ended by Brookes playing a hammer-on solo or one of the above mentioned widdlies. Not good.

“Discharge” from 2002 is a very different beast. Where “GNW” was as far removed from the Discharge signature sound as was possible, this was a return to form in astonishing style. With the original line-up back together after meeting at a party, this is the album they should always have made as a follow-up to “Hear Nothing”. There’s not a duff track on it and its consistently excellent throughout. There are elements of industrial music and wee tinges of metal but its a behemoth of an album; Bones plays an absolute masterclass on this one. His chugging, searing guitar and Cal’s throaty, verging-on-screaming vocals are magnificent. Rainy and a returning Tez on drums pack a rhythmic punch that is as powerful as they are tightly wound. Pete Coleman’s production is lean and mean and the two stripped back remixes tagged on to the end of the album are simply stunning. If you don’t own this, do yourself a favour. “Accessories By Molotov” is incredible. The ending where it goes double time is spine-tingling and I’m only sorry they faded it out so quickly.

Jumping back in time a little, a rejigged line-up recorded “Massacre Divine” and “Shootin’ Up The World” (91 and 93 respectively). Whilst not as divisive as “GNW”, the retention of a hard rock/metal sound and Cal’s distinctive vocals maintaining his “Bon Scott-style”, they were poorly received by both critics and fans. You can almost picture the band outgrowing punk and thinking that the rock crowd would embrace them. It was tried by many before, The Rejects, the Cult (successfully I must add) and dozens of others. The lure of better gigs, better drugs, better girls and better money has seen the downfall of many punk bands before and will again, I’m sure.

They’re not without their charms, the albums, though. “Manson Child ” and “White Knuckle Ride” among others have a decent hard rock song hiding in there somewhere. “Terror Police” from “Massacre” isn’t half bad either and again, taking the Discharge history out of the equation, they’re both decent enough records.

One cannot dismiss the influence of Discharge. They were and are everywhere, from Sepultura and Metallica’s early thrash records through to the whole US hardcore scene and every punk band on the planet. There’s also apparently a massive D-Beat scene in Japan and South America. The recent album was another return to form and they’re playing to huge crowds again worldwide. There’s a book in there somewhere if someone can be arsed  writing it. Mr Glasper, maybe?

Discharge can be found on Facebook and on Bandcamp.