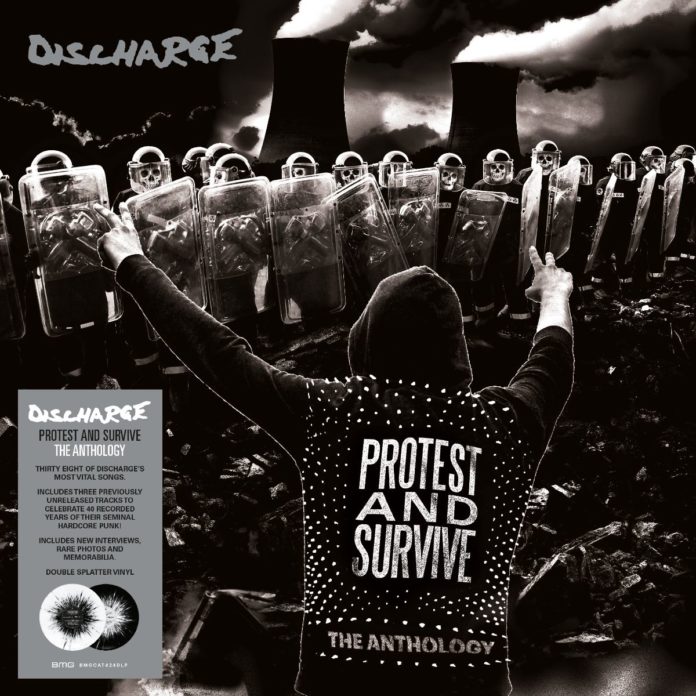 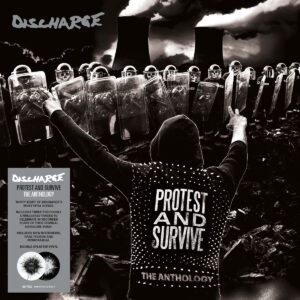 Out on 21st February

It’s been 40 years since “noise not music” punks Discharge dropped their first payload on vinyl. This new 2 CD collection serves as either an introduction to a crucially important band, or a reminder for those who already know them of why they will always matter.  Nathan Brown indulges in some reminiscence.

If you were an anarchist and a punk in the 1980s, Discharge mattered as much as Crass. Crass were the intellectuals of the revolution. They had ideas about a new society. Discharge, on the other hand, were the angry rabble shouting at the gates as they tried to tear them down. Discharge’s anti-authoritarian and anti-war messages were distilled into haiku making for more catchy songs with memorable choruses. This, perhaps, made them more accessible. Oh, and their artwork and image was punk as fuck.

I reckon you can bisect the world of punk rock into pre-Discharge and post-Discharge. It’s easy to forget how ground breaking they were when they first hit the world. They were faster, harder, louder than all the punk bands that had come before.

Okay, there were a few US bands who had done the fast bit but Discharge had a rawness that made them stand out. They played with the ferocity of Motorhead but a damn sight faster. The tormented vocals were shouted as if from the epicentre of a nuclear bomb blast. The guitars recreated the boom and roar of that blast. And they had that distinctive drum beat.

I can still remember where I was when I first heard the cataclysmic strains of Discharge. An independent record shop called Handsome Dicks in Weymouth. I had money to spend (probably post-christmas) and it was late 1980 or early 1981. Before I parted with money for a copy of London Calling, I was played some of the latest new punk bands by the resident studded-jacket-sporting-punk-rocker behind the counter. (He just happened to be my uncle). What I heard through the headphones blew my mind. There was no question. I was definitely buying the first couple of Discharge EPs.

The number of bands that were inspired indirectly, and more directly by adopting the D-Beat style is beyond counting. One day someone will do a PhD to establish exactly that, publish the results and a bunch of people will say “You missed us”.

The first of the 2 CDs in this collection provides a good overview of most of Discharge’s output over the last 40 years. If you are new to Discharge this would provide a fairly good introduction to the band. It might also be of interest to those of you who no longer have the early singles or can’t be bothered with hauling your weary arse across the room to keep changing records. I’m really pleased they haven’t gone done the weary route of chucking everything in chronological order. This means you get to compare and contrast the band’s sound rather than listen to it change incrementally.

The majority of the tracks are drawn from the “classic” early years, which makes sense. There are 8 songs from the album Hear Nothing See Nothing Say Nothing including Protest and Survive which gives this collection its title. You get Realities of War and But After The Gig from the first 7″. Fight Back is joined by War’s No Fairytale and You Take Part In Creating The System from the second EP. Absolute gems. Decontrol and It’s No TV Sketch from the bands 3rd EP are dropped into the mix. A Look At Tomorrow and Ain’t No Feeble Bastard – arguably two of the bands finest songs – represent the ground breaking mini LP Why?

The single tracks Never Again and State Violence State Control are slotted in – how could they not be included? Chuck in Warning and Price of Silence and that’s Discharge up until that awful Grave New World album. Thankfully nothing from that abomination made it onto this collection. I guess the 2 tracks from each of 1991’s Massacre Divine and 1993’s Shootin’ Up The World are included to show the variety in the band’s sound. To my mind the vocals, which verge on Axl Rose pitch, and the awful metal influence serve as a warning to steer clear! In 2002 Discharge returned, sounding more like themselves proven by the 4 tracks featured here from that eponymous album.

If the first disk serves as an introduction, the second disk is more for your “advanced” Discharge listener (nerd). 6 previously unreleased tracks from the demo for the Discharge album in 2002 form the core of this disk. The songs feature different lyrics or drum intros than the final versions which made the final cut. Descending into Madness gets its first ever outing on this release. Good listening. Re-workings of old songs in 2004 (5 recorded in the studio, and 3 live) feature Rat (Varukers) on vocal duties. This serves as a reminder that for 10 years he was their frontman while they gigged exhaustively. It also makes obvious the similarities between Varukers and Discharge!

5 tracks from the band’s 1977 demo are served up to demonstrate this band didn’t appear fully formed. The sound is typical of the era. Lo-fi with the influences of the Adverts and the Pistols apparent. Although it is hard to believe this is the same outfit who first dropped that noise on us in 1980, the song I Love Dead Babies (incuding the line “Have a good wank”) shows they were always out to shock. Also included are the extended 12″ versions of the More I See and Ignorance, which to my mind always seemed like a sign of a band who had run out of ideas. The remixes of Accessories by Molotov and Corpse of Decadence included on disk 2 sound more like Ministry than Discharge. Then I read in the accompanying booklet that Tezz Roberts played with them too and it makes sense…

This is a band who have a new wind and plenty to give (some great gigs, a cracking album End of Days in 2016 and a new LP due this year). It would be quite fitting then that they finish this collection with Tomorrow Belongs to Us – the missing track from the mighty Decontrol EP. Except that despite what the track listing tells you, what you really get is Visions of War from Why? And what a song to end on!

The cover is a nice montage of a punk rocker facing off undead riot cops protecting cooling towers spewing smoke in the background – a nice nod to the Clay Records logo perhaps. It takes the studded leather from the first EP as a jumping off point and cements Discharge as important to rioting punk rockers the world over. The band’s logo is  printed in silver on the CD digipack and the inlay and booklet feature pictures of the band and gig flyers from 1977 up to 2014. The 20 page booklet presents a comprehensive overview and interview with band members from the pen of punk rock chronicler Ian Glasper. The vinyl version spreads this content across a gatefold with 2 splattered platters.

I’ve enjoyed listening to this, and can’t fault it, even the slightly iffy songs. Seriously, what were you expecting? It’s Discharge!
~
Pre-orders for the album can be made now and the beast itself comes out on 21st February.

Nathan Brown wrote this review. More from Nathan can be found over at his Louder Than War Author Archive.