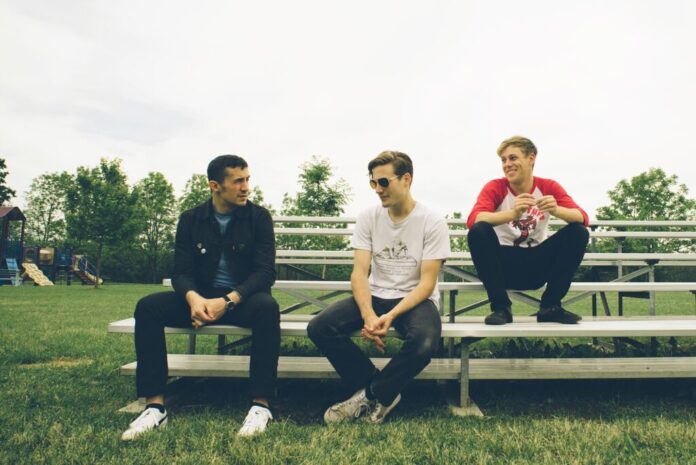 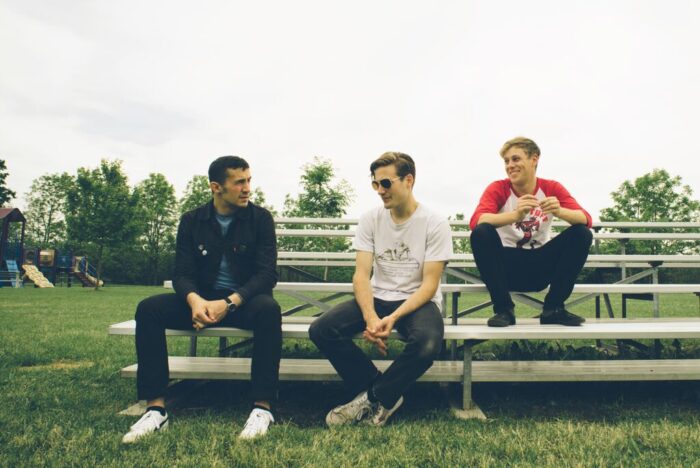 Leading up to the release of their new single No Weaknesses, Luke Bentham (vocals/guitar) and Kyle Fischer (drums) of Dundas Ontario’s The Dirty Nil talk with Lisa Sookraj about what rock and roll means to them, why they’re pro covers and why Southern Comfort would be their booze sponsor of choice.

The Dirty Nil get what it means when music really means something to you. It’s music to go hard to when the going gets tough. It’s genuine rock that doesn’t try to sound like any one artist, though you can pick up on the influence of some classic pop-punk, post-hardcore, garage rock, grunge and classic rock. This appreciation for the latter like Zeppelin, Sabbath and The Who, as well as a fondness for The Replacements is what unites the members in Dirty Nil, with other interests among band members including Protomartyr, Queens of the Stone Age, Metz, Weezer, Fugazi and Hot Snakes. No wonder they’ve evoked comparisons to the Pixies, first wave garage rock, early Green Day, Jawbox and Nirvana.

Driven with enthusiastic force, there’s an undeniable energy present in the Nil. Strong songwriting manifests itself in an unblemished track record of songs over several EPs that are as chaotic as they are catchy, succinct as they are rough. Alternating between kicking your ass and apologetically offering you a massage.

Vocalist/guitarist Luke Bentham and drummer Kyle Fischer took time to chat with Louder than War’s Lisa Sookraj while in Toronto before heading to a gig (their awesome buddies from Philly, Loose Tooth).

Lisa Sookraj – The Dirty Nil’s music is rife with passionate emotion. This suggests that while you’d choose watching a shark eat something over a sunset (which was one of your recent Tweets), it might not be the easiest decision for you guys, since these two poles are both represented in your music – which is uncompromising but also somewhat weak in the knees. It’s tough and calloused, but sensitive and exposed.

Luke Bentham – As a songwriter I try to go wherever the feeling is on each song. I’m not afraid of going to a more raw, vulnerable place at times. It’s fun to switch between that and being a little more brash. I like bands that are explicitly loud all the time and ones that are explicitly quiet. But both ends of the continuum are intensified when you bring the other in.

Your vocals are this powerful secret weapon – a notable contributor to what sets The Dirty Nil apart and makes an impact on listeners. There’s great range, stamina and the howling is gripping because it feels sincere. This suggests you have an appreciation for vocal ability in the music you enjoy listening to. Who are some of your vocalist heroes and how did you learn to belt it out like a mofo?

Luke – *Laughs* thanks that’s a nice compliment. I’ve always valued music with powerful vocals. I’ve got a lot of rock voice heroes for sure. Some whom I emulate unconsciously at times. Like Mick Jagger. I’ve also often got that kinda whiskey-throated bark from Sticky Fingers in the back of my head. Paul Westerberg and the Replacements have also had a massive influence on us.

Our band started with Kyle and I just learning the basics of our instruments and I’d never sung in any capacity at all. It was a constant exercise uphill. I had confidence issues early on, like I’m sure most singers do.

I strive towards a more raw vocal sound and write songs in keys that aren’t in a comfortable range for me anyway. I’m comfortable to yell and I never lose my voice from screaming which is fortunate. Each time we put together a new batch of songs, I try to push it harder and bring it somewhere different. At the end of the day I also love more natural vocals like Robert Pollard of Guided by Voices. Clear strong, not overly pushed or strained.

Do you like to scream and yell as well, Kyle?

Kyle – In my car. When I’m driving around.

What do you scream and yell along to?

You gonna do a rap for us right now?

Considering that and the desire to recreate your live sound on your records, it isn’t surprising that you’ve done a ton of touring. Can you talk about the importance of playing live for you in terms of forming meaningful relationships with fans and other bands? And are there any places you dream of getting to play one day?

Kyle – We’re a live band first and foremost. That’s our bread and butter. We try to capture that when we record. On the record we just finished, I feel that we achieved it best. First time we were all pretty happy with it. We finally captured that moment, that flash in the pan.

Luke – We always record being as minimalist as we can. We don’t want a dolled up version of who we are. We don’t like the unnecessary tinkering.

Kyle – It’s all too stressful. We lose our minds and think about it too much.

Luke – One of the most common regrets you hear about rock bands is people fucking with their recordings too much. Spending a week trying to figure out the gated reverb on the snare. Fuck that. Be a band, go in and play your songs. Rock and roll takes a turn for the boring when people go get too self-indulgent in the studio. Kyle and I listen to the same music for the most part and our favourite records are when you can hear the room and the personality. That’s paramount in my appreciation of a rock and roll band is hearing some personality.

Kyle – Rock and roll is about making mistakes. Even when people are shit at playing, what matters is having really good songs and capturing the feeling.

Luke- There’s no real room left for breakthroughs in rock and roll. No one is going to re-invent the electric guitar. The two main things there is still room for is making good songs and having an interesting, unique personality.

Kyle – To answer that other part of your question, we haven’t been to Europe or anything like that. I’d love to play Japan too. We want to play England, Luke just got back from there with Dave.

Luke – I was playing guitar in Single Mothers. Did Reading and Leeds.

Kyle – We’re trying to get to Europe next year when the record comes out.

Can you tell us a bit about your upcoming full-length on Dine Alone? And are you willing to hint as to when we can expect its release?

Luke – I think we all have different ideas of what we set out to do with the record. For me personally, I wanted to make a rough and tumble but also somewhat accomplished sounding thing I was proud of. I wanted to have performances that had personality via not using a click track, employing the breathing metre and tempo that we have naturally. We accomplished that. I also just wanted to make sure the vocals were really good, but I didn’t want to double track them and wanted it to be my voice and all its shitiness. I’m very proud of what we did together. We didn’t want some drastic step in a different direction, but we did have some production goals we wanted to step up.

Kyle   – As far as what people can expect. We re-recorded a couple of old songs we weren’t as happy with before. Thought we could capture them better after having played them live a bunch.

Luke – We wanted the record to be this trashy, snotty, stadium rocky kinda album with a bunch of influences, sounds and feels on it. The songs we selected to re-do fit that feel and that identity. We wanted a record that was solid bangers all the way through. That was a big motivator crucial in the decision of what we were going to record.

Kyle – The songs are across the board. Some of our most tender moments are on the record, as well as some of our most aggressive as a band. It’s going to be very loud.

Luke – Loud guitars. A lot of feedback. Some studio banter.

Kyle – It will be out early next year sometime. 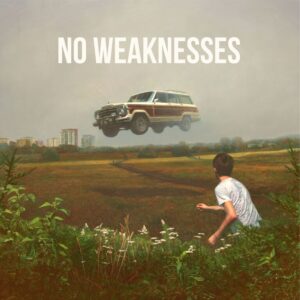 Prior to your full-length you also have the No Weaknesses single coming November 6th (title track here), featuring a Fugazi cover. You really nailed Bowie’s “Moonage Daydream” on your Little Metal Baby Fist EP. You embrace and rule the cover. What is it that you enjoy most about doing them?

Luke – All my favourite rock bands play covers. It’s a time-honoured tradition of rock and roll. It’s fun to relieve any kind of brick wall you hit with creativity by playing a Big Star song or playing some Led Zeppelin riffs together. A nice way to go back to your roots as a band and reconnect on the things that originally made you gravitate towards playing music in the first place. It serves many functions, but mostly it breathes fresh air and fun into what you’re doing.

Kyle – Songs that you love are what you cut your teeth on when you’re learning to play music. Covers are a good way to introduce yourself to new things. Like for drumming, you can learn what makes a good drummer or a bad drummer. How you can handle a song, what the fills are and how a song comes together. It also keeps you excited. Sometimes you see a band whip out a cover and it’s one of the best moments of the night.

If the Dirty Nil was a dirty anything else, what would it be?

Kyle – Yeah. That’s what it would be.

If you could get sponsored by a brewery what would it be?

Luke – Heineken is a good beer. But no, I’d get us sponsored by Southern Comfort. It killed Janis Joplin so it’s got to be good.