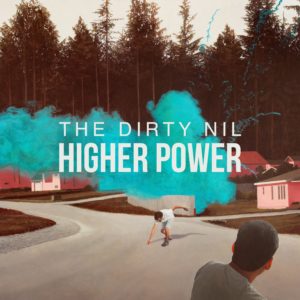 On their debut full-length Higher Power, The Dirty Nil have accomplished exactly what they set out to. Lisa Sookraj reviews.

The record was thoughtfully produced by the band, Shehzaad Jiwani (Greys) and Adam Bentley, with mixing done by John Goodmanson (Sleater-Kinney, Death Cab for Cutie, Bikini Kill). The result is as rough and tumble as The Nil had hoped. Leadman Bentham’s own words, “a record of solid bangers all the way through,” sounds about right.

The Dirty Nil offer a pure, brash form of rock, taking cues from a variety of genres: punk, post-hardcore, garage rock, grunge, alt rock and classic rock. The fact these guys come from a classic rock background shines bright and proud here, more prominent than ever. This was no accident. The band knew what they were going for and they went for it hard.

In the process of fleshing out this intent, lost is some of the endearing and evocative play with pacing and sentimental sensibility felt on their EPs like “Little Metal Baby Fist”. What the band choose to deliver here is less feely – that uncontrollably heart-string-pulling effect of Bentham’s vocals, which often elevated the band from great to greater – is replaced often here with a colder kind of ass-kicking. The way The Nil want to stand apart from their indie rock counterparts is clearly with their mission to intimately give small venue/band fans a big rock band experience.

With most of the songs written in 2014 after the band’s first US tour, The Nil sound like an all American band (though they’re Canadian) embracing stadium rock with no shame. The twang and sustain that punctuates and very much makes the anthemic lead single “No Weaknesses” exemplifies this theme. Strength and confidence, and perhaps a simultaneous love and hate for arrogance, permeate the album.

After the opener, the album rips into one of its top tracks “Zombie Eyed”, with more of a 90s alt rock kind of sweet stickiness (showcasing the band’s liking for Weezer and the Pixies) up against some big, rugged guitar work. Tracks like this may hit old fans hardest. “Know your Rodent” works similarly, smelling strongly of Everclear. This bass-driven song shows how great dynamics and a simple formula may make the same impact as always – but there are no complaints since the result achieved is so satisfying and here with the added bonus of a new take on nostalgia.

“Friends in the Sky” and “Bury Me at the Rodeo”  possess what made the old Nil tracks special –understated simplicity and a sense of endearing vulnerability that worked well in contrast to the ferocious rock delivery. Fatter takes on old songs like “Bruto Bloody Bruto” work well on Higher Power, but if you haven’t heard the original EP versions, you may want to check them out for yourself. They have their own benefits.

That said, the biggest koodos to the Nil and their cohorts on this album go to how Higher Power manages to sound more produced and contained than their EPs, but not in a way that’s any real detriment to the band’s sound, suiting the tracks assembled here and fleshing out that go-big-or-go-home effect they’re all about. Leadman Luke Bentham pointed out in our interview that the band acknowledges breakthroughs in rock are hard to come by and not what the band is striving for. Go in with this in mind and come out happy. Sometimes commitment to rock, no frills, all thrills, is all you really need. Must. See. Live.