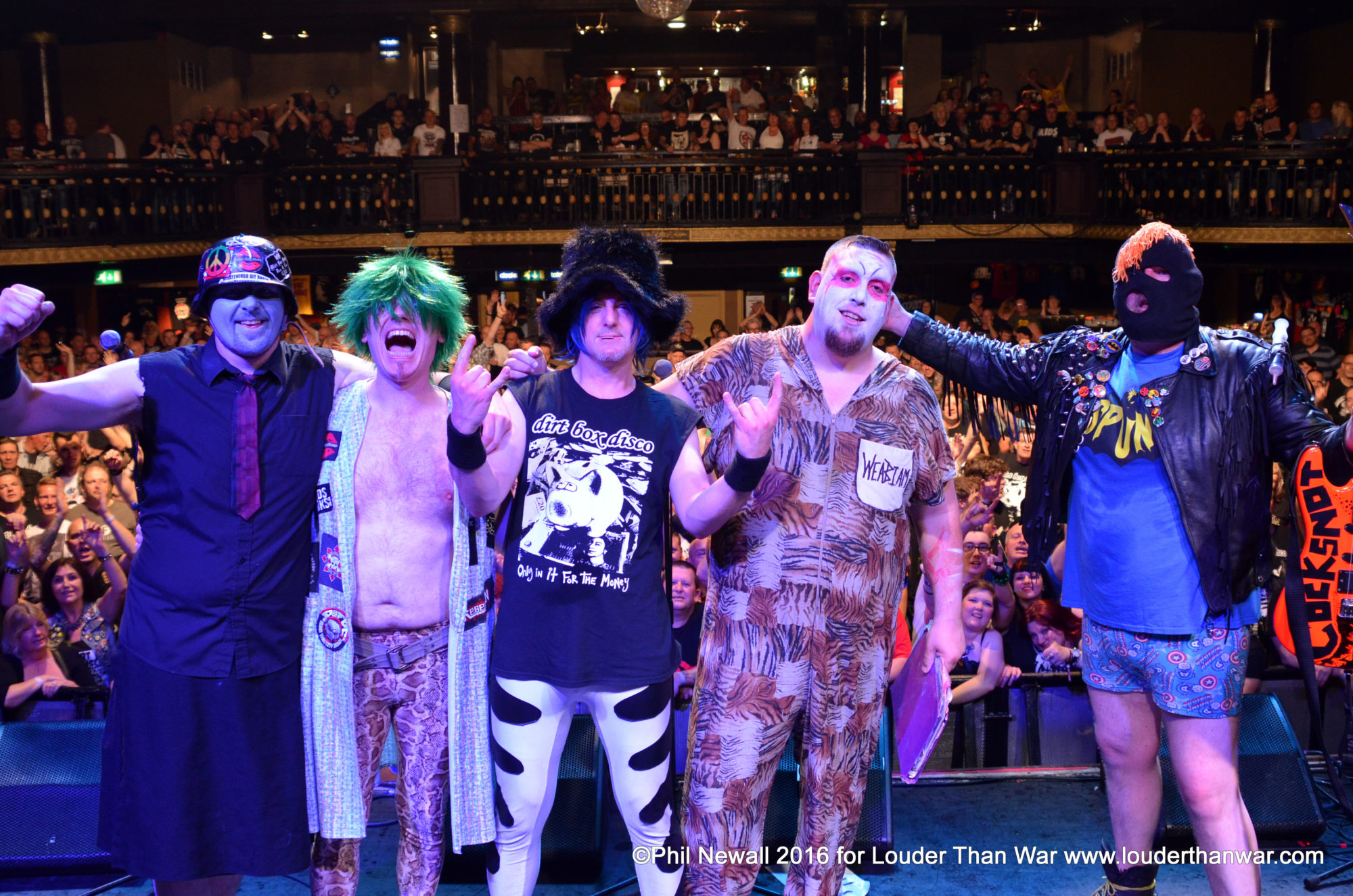 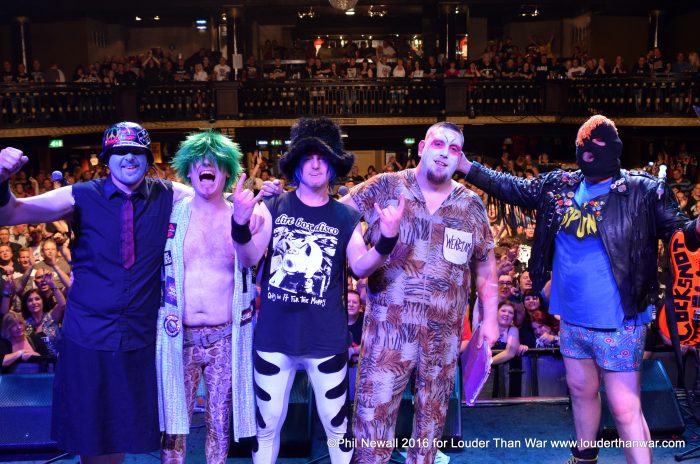 Dirt Box Disco are the neon antidote to the sometimes earnest punk scene, a scene which on occasion celebrates its own obscurity, its insularity – where those who “swear I was there” are feted; Dirt Box Disco trample across such considerations, they celebrate togetherness, unity and unadulterated pleasure and provide a worthy soundtrack to the party.

They took to the stage at The Ritz, Manchester, as part of the North West Calling Festival – it was 5pm, generally a fairly insignificant time of day; The Chase is beginning on ITV, the rush hour traffic is building nationwide – however for the near capacity Ritz crowd the arrival of Spunk Volcano, Maff Fazzo, WEAB.I.AM, Deadbeatz and Fingerz was a cause for unbridled celebration.

The band in their customary irradiated thrift shop on acid gear launched into their riot and a half mix of new wave, glam, and bombastic metal with grinning zeal; larger than life frontman WEAB.I.AM (nearly) wrapped in his favourite animal print onesie punches the air and declares Manchester to be the bands spiritual home – that dispensed with the cerebral stuff; from then on it was a kaleidoscope of pumped up material from their entire and rapidly expanding back catalogue, reaching back to ‘I Just Want to Be A Girl’, and ‘I Won’t Forget’ from the debut ‘Legends’ album to the joyously moronic ‘Standing In A Queue’ and on to ‘I Don’t Want To Know Your Name’ from the current ‘Only In It For The Money’ album which neatly delivered a swift kick into the nether regions of more po-faced critics. 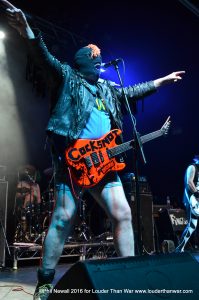 Dirt Box are pin-balling the expanse of the Ritz stage, they are loud, and flamboyant – the ADH kids who did eat all the blue Smarties armed with monster riff’s, and super-size me sing-a-long choruses – their audience respond in kind; this is The Ritz where prohibitive beer prices prevent the usual ‘rain of ale’ that greet Dirt Box – instead legions of crowd surfers are piling over the barriers, while countless others are hoisted aloft spurred on by the adrenaline rush of ‘Let’s Get Wasted’…this is a joyous celebration of the ridiculous encouraged by the barks of the masked guitarist Spunk Volcano reminding the crowd that he had slept with their mum’s!

Dirt Box Disco deliver frantic, insanely catchy snatches of sunlight that burn directly into your brain; it’s never going to be musically challenging – there is no beard stroking going on at a Dirt Box gig; it might even be considered a guilty pleasure, the luminous relief from studying all those Penny Rimbaud essays; the answer being the chant of “Hooray, Hooray…Its Dirt Box Day”