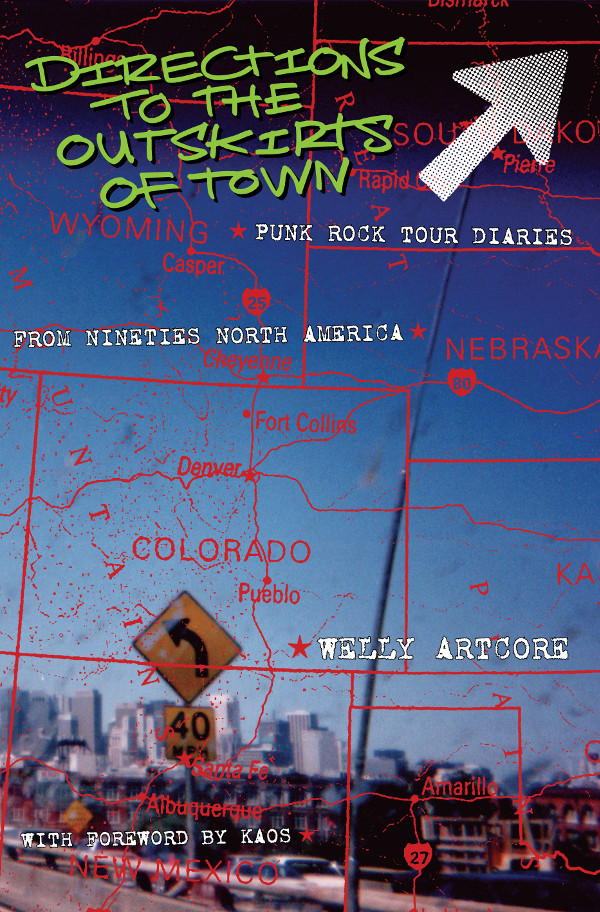 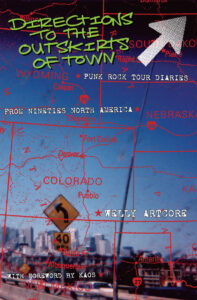 A retrospective from one of the UK’s leading zine writers reveals the full humour – and horror – of touring America in the 1990s for punk rockers Chaos U.K and Four Letter Word. It made  Nathan Brown laugh out loud.

I know Welly from the bands he’s played in but his real strength is that he writes the funniest reviews. Pithy one paragraph takedowns or hidden praise. This is what makes Artcore, the UK’s second longest running DIY punk zine such a joy to read. If you wanted someone to capture and recount the bizarre experiences that underwent Chaos UK on the ’94 USA tour and Four Letter Word on their ’98 USA and Canada tour I don’t think you could pick anyone better. Welly’s descriptive and irreverent style is observational while remaining at ease so you forget you are reading and find yourself immersed in the unfolding scenes. This is a sign of good writing.

The first half of the book is a really fun read – how Chaos UK managed to bring chaos to the USA or were sometimes subject to chaos from the USA. Even boarding a coach to Heathrow has a comedic Young Ones-esque element to it. Welly was along for the ride as roadie and merchmonkey. When the “tour bus” turns out to be a people carrier and they have to hire a trailer, the foundations are laid for what would have made a script for a 90s road trip movie which would have been divorced from reality, only it’s for real. A few of the capers are on the scary side and you consider yourself lucky to be a mere spectator, others are drunken punk rock fun of the highest order and make you wish you had been there. Goofing around and annoying their hosts, dealing with psychopaths, getting ripped off by a promoter and facing cancelled dates…oh yeah, and the brief moments of music that happened in between… I really don’t want to give any spoilers but everyone has the piss ripped out of them, including the author.

The second half of the book has as much chaos but is a much darker set of chapters. Welly’s retelling of a month of Four Letter Word on the road across the USA and Canada four years later was exhausting just to read. This time he is at the centre of the maelstrom as a singer in the band and it shows. The cultural divide becomes apparent e.g. sarcasm not being understood by the punters over the pond. That the band lived through it and survived to tell the tale is a testament to their constitution and huge amounts of luck. Constant drinking, sleeping in vans, not sleeping in party houses, poor turnouts, cancelled gigs, run-ins with rednecks and cops, band members falling out with each other, bands falling out with other bands. As the story progresses everything starts to unravel…

This isn’t what anyone signs up for but the “warts and all” truth of life on the road is what you get in Directions To The Outskirts Of Town. If you want the glamourous version – the thing that motivates people to embark on these insane odysseys – you’ll need to check out a ghostwritten work of fiction from a rock star. Having said that, it is clear that amidst the stresses and hassles, the band felt lucky to be playing with some seriously big names in the world of punk rock. Every now and then there is a reality check, “pinch me, I must be dreaming” moment in the narrative. Even when recounting a shitty experience, Welly still manages to inject some humour, which is what makes this a great read.

Both trips took place before mobile phones, let alone smartphones with mapping and GPS to show you how to get to a given destination. In fact, even email wasn’t in regular use by the punk community back in 1998 let alone 1994. The bands were often armed “with nothing more than the name of a club on a scrap of paper that turned out to be a disused unit in an industrial estate”. Given that some people seem incapable of making a simple decision like which t-shirt to wear without enlisting their entire friendship circle via social media tells me Darwinian forces would see off many of today’s pretenders if they had toured back in the 90s. Reminding yourself of that fact every so often serves only to amplify the horror. And then there was surviving the lack of food for veggies and vegans. Luckily they were always able to find falafel (so roadie/driver Graham didn’t “die of veganism in America”).

The advantage of having graphic designer Welly as your author is that it’s nicely laid out. The writing is supplemented with 250 tour photos and flyers from Welly’s personal collection including snaps of most of the bands that Chaos UK and Four Letter Word toured or played with including: Eyehategod, Youth Brigade, 7 Seconds, Swingin’ Utters, Brand New Unit, Pinhead Circus and Turmoil. You are provided with a complete list of dates and a couple of handy maps illustrate the haphazard routes both bands took. In all, Welly visited 38 US states and 4 Canadian provinces across the two tours. For the trainspotter punks among you, every band they played with gets a mention and every venue’s address is given.

Having finished the book, I’m already wondering when I can thumb its pages again, which is a good sign. It made me laugh out loud many times. This is one volume the charity shop ain’t getting their mitts on.