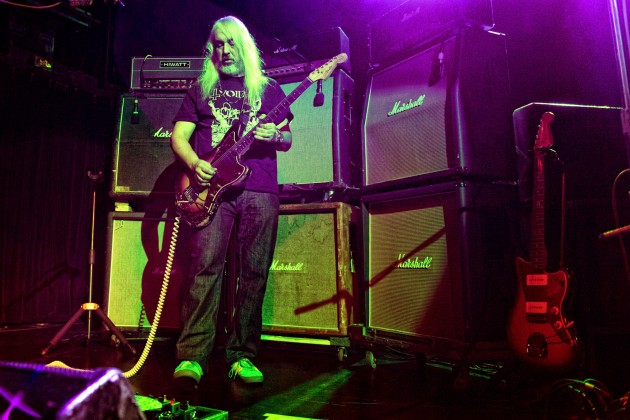 After illness derailed their original December date, the Amherst veterans returned to London for a voluminous victory lap of their recent record, as well as a selection of their solo-addled greats. Sam Lambeth reviews.

When Dinosaur Jr. take to the stage, it’s hard to realise whether it is actually the Massachusetts monoliths or just three hirsute stage techs lost on their way to the rider, such is the trio’s shrugging indifference. However, it’s a perfectly fitting metaphor for the mercurial talents of J Mascis – while other bands focus on painstakingly pouring their emotions into words, his volatility is expressed through volume. Over the course of this gig, the iconic Roundhouse venue reverberates and rollicks to Mascis’ trademark tumultuous guitar solos, which say more and make a deeper connection than the shamanic frontman ever could.

The concert, originally scheduled for last December but cancelled due to illness, has been worth the wait. The sold-out crowd’s gaze is soon focused on Mascis as he launches into the mournful, but mellotron-less, chords of Thumb, which then breaks out into the first – of many – six-string eruptions. Despite their post-comeback records all having relevance, it’s rare Dino devote a set to new cuts. However, their Roundhouse selection proves to be something of a celebration of their most recent LP, Give A Glimpse Of What Yer Not. That’s to be feted, of course – Goin Down gets the crowd’s feet warm with its chugging fuzz and soaring solo, while the twinkling power pop of Lost All Day and the Lou Barlow-led exhaustive stomper Left/Right are well worthy of admission, the latter seeing Mascis trade his Jazzmaster for a plucky stab at the bass.

Anyone who’s been to a Dinosaur Jr. gig before will know that while the guitars are loud, talking is few and far between. A couple of mumbled thank yous from Mascis and a more articulate appreciation from Barlow are as good as things go, but it means there’s ample time to fill with more songs. Watch the Corners, from 2012’s I Bet On Sky, is arguably the best track the band have concocted since reforming in 2005, a majestic slice of alternative rock with a solo that simply aches with longing. Start Choppin is propelled by a flowery groove and a ’70s-esque strut, and Mascis, as wry as ever, indulges in something of a bait-and-switch when the riff to Feel the Pain is promptly swapped for the crunching swaths of Out There.

Arguably, it’s the 1980s output that has given Dino an everlasting currency, and the songs cribbed from said era do show a compelling mix of vulnerability, rage and frustration. Kracked chops and changes like a car seguing between lanes, giving Barlow chance to pummel his bass and Mascis time to floor his wah-wah pedal. Budge is a frantic rocker built on Murph’s bone-shattering snares and Mascis’ weary roar, while Freak Scene remains a blistering slab of adolescent indifference. As the trio leave the stage, as silent as they were when they entered it, the sold-crowd have experienced something words simply can’t attest to.

Dinosaur Jr. are on Facebook and Twitter. Their new album, Give A Glimpse Of What Yer Not, is out now.

Sam Lambeth is a Birmingham-based writer, journalist and musician. He is on Twitter, and you can read more of his work on his archive.