Last Sunday Dinosaur Jr played what can only be described as an intimate gig in Bristol’s Fiddlers Club. It was, needless to say, a riot. Louder Than War were privileged enough to be intendance & here’s what went down.

Straight up confession first – out of all those “US post no wave” bands that entered our ken & rose to fame (kind of) during the mid 80’s; such as Sonic Youth, Swans, Big Black, Hüsker Dü & the Butthole Surfers, Dinosaur Jr were probably my least favourite. Granted I played “Bug” (1988) quite a lot as well as the excellent “You’re Living All Over Me” (1987), & have probably given all their albums at least one cursory listen, but they’ve never really flipped my wig (talking of Hüsker Dü) to be honest. 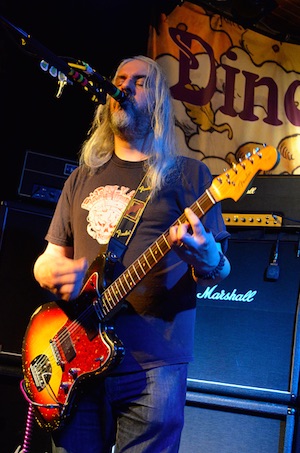 So why, you may ask, did I decide to come along to this gig, especially as it was clashing with the brilliant Anthroprophh‘s album launch gig just minutes from my flat & which had Louder Than War favourites Big Naturals taking up backing band duties. Well, the answer’s quite simple. They were playing at a venue with a capacity under 500. Yes, under 500. No one in their right mind would turn down the opportunity to see one of the greatest living guitarists in the world at the moment in a venue that size right? Would you? Course you flipping wouldn’t! And neither did I. I’m trusting Anthroprophh will play Bristol again a couple of time this year & I’m trusting Dinosaur Jr won’t ever play a venue this size in Bristol ever again. So although the gig sold out pretty sharpish I got “on the emai”l & begged a spot of the bands list of the guys who rep em.

Little Barrie were the support band but sadly I missed half their set on account of a queue to get in (ooh, there’s a novelty for a kid who usually goes to gigs that rarely boast more than 100 people), one which afforded me the opportunity to watch taxi after taxi after taxi roll up, a sight which led me to the conclusion (thankfully erroneously as it happened) that the place was going to be wall to wall with olduns chewing their beards & stroking their baccy. It was a shame I missed the start of Little Barrie’s set coz what I did see was dead impressive. Nice to have the opportunity to big up my homies too, way too few Nottingham bands out there. Little Barrie major in seriously impressive surfy, bluesy, garagey rock, music very much in the mould of all your favourite surfy, bluesy, garagey rock bands but probably better.

Little Barrie have been around for ages (well, since before 2005 when their debut album was released anyway) and ‘our’ John wrote a review of them (at Beautiful Days) last year which nailed pretty much how amazing their retro yet contemporary sound blows audiences away. They also seem to know how good they were which, dare I say it, led me to think they were plum showing off at points (mark that one down to jealousy I guess) as they took each song & played with it it felt like we were watching one of their practice sessions, they were cool & relaxed & seemingly oblivious of the audience as they just jammed away amongst themselves having a whale of a time. There were regular changes of pace, tone & style & it was all completed with strong flourishes. Awesome stuff all round, even if I did only catch four songs. John suggested if Steve Albini could get his hands on them he’d mould something  pretty special. I’ll see his Steve Albini & raise him a Jack White. 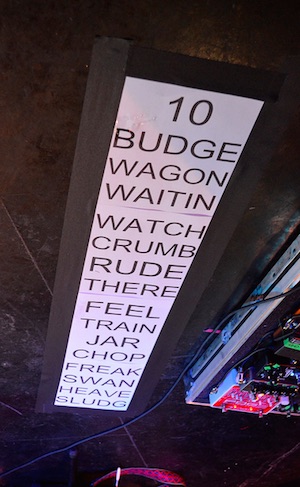 Dinosaur Jr were supposed to start at 9 prompt. They were 10 minutes late in fact but that didn’t matter, obviously, as it meant we were 10 minutes more fired up after 10 minutes more reflecting on the fact that Dinosaur Jr probably haven’t played a venue this size more than a handful of times in the last 30 years since (as we found out later) J & Lou formed their first (hardcore) band in 1983.

The setlist (see right) was gaffer taped to the the floor so we knew exactly what we were in for. It was actually missing one track (of more later) but as you can see “what we were in for” was a combination of a career spanning 15 songs (albeit including a 4, maybe 5 tracks from last years I Bet On sky) which included all our Dinosaur Jr favourites and one heart stopping Deep Wound cover (J & Lee’s first band). Even if I hadn’t seen the setlist I’d have known it was career spanning coz every so often I’d recognise a song & as the only albums I was familiar enough with to recognise tracks off were pre 1990 it meant it must’ve included tracks from the bands full lifetime. Budge, for instance (off of Bug) was second song up & deffo a highlight for me, along with Freak Scene (natch) and the closing track Sludgefeast. Hec, I even caught myself murmuring along to these three tracks, a sure sign I was psyched cuz I NEVER murmur along to songs usually.

J was the very model of coolness. Apart from the occasional move of a foot to kick a different pedal on his monstrous pedal board (see pic) J barely moved, yet he still managed to coax some pretty flipping sick sounds out of his guitar. This dude is, after all, one of the most mind bendingly awesome guitarists out there atm & to coax all that out of his instrument with so little fuss was impressive. How he managed not to sweat befuddles me, I wasn’t even on the stage under the spotlights & I still managed to end up with a sweat line / tidemark all the way down my jeans to my knees by the end.

I kind of sensed the audience were quite staid although I didn’t turn round to check at all. There was very little jostling from behind anyway, and in the front row there only seemed to be a couple of us really going for it (hat tip to Big Jeff). I got the impression the audience was on the verge of popping off (like popping off into a seething moshpit rather than popping off to sleep), that it just needed a wee nudge & it’d be off. When Lou announced “We’re going to play a song from J & my first band now, from around 1983 when we were a hardcore band” I could have sworn that’d be the trigger. A minute thru the track though (Training Ground) & it was obvious shit wasn’t gonna pop off at all so I began mulling over the idea of my first stage dive since I broke my spine in 8 places (only joking Mum, poetic license an all) (wasn’t joking really everyone else). I’d even gotten as far as to remove my phone from my pocket to pass to my gig buddy (who just so happened to be the local MP) but darn & drat, those hardcore songs from 1983 right? They never lasted more than 90 secs did they? So I blew it really by dilly dallying. That and the fact that I was beginning to worry that I’d never get back to the front again. That’s what happens when you get old, you start pondering the consequences of your actions before, er, acting. Fuck I miss impetuosity. Still, for those 90 seconds it was like we were watching pre Zen Arcade era Hüsker Dü & boy was it magical & boy was it my highlight of the night. (But bear in mind of course I’m the guy who got Strife into our end of year chart at number 16 so yeah, hardcore’s kind of my thing anyway).

A short urine break for Murph interrupted the flow (these old guys & their lack of bladder control eh?) which gave J the opportunity to do nothing & Lou the opportunity to banter before the band careered through the rest of their set list. But the fun, of course, was just about to start with the encore, an encore that started with a cover of The Cure’s “Just Like Heaven” from their 1987 album Kiss Me, Kiss Me, Kiss Me (i was a big Cure fan in the 1980’s too). It was during this that, finally, a wee ruckus began behind me. As if that wasn’t enough they then went & closed with Sludgefeast off of 1987’s You’re Living All Over Me & that was it, I was reduced to a rubble of sweaty wonderment.

All words Guy Manchester. More words by Guy can be read here. He tweets as @guid0man.