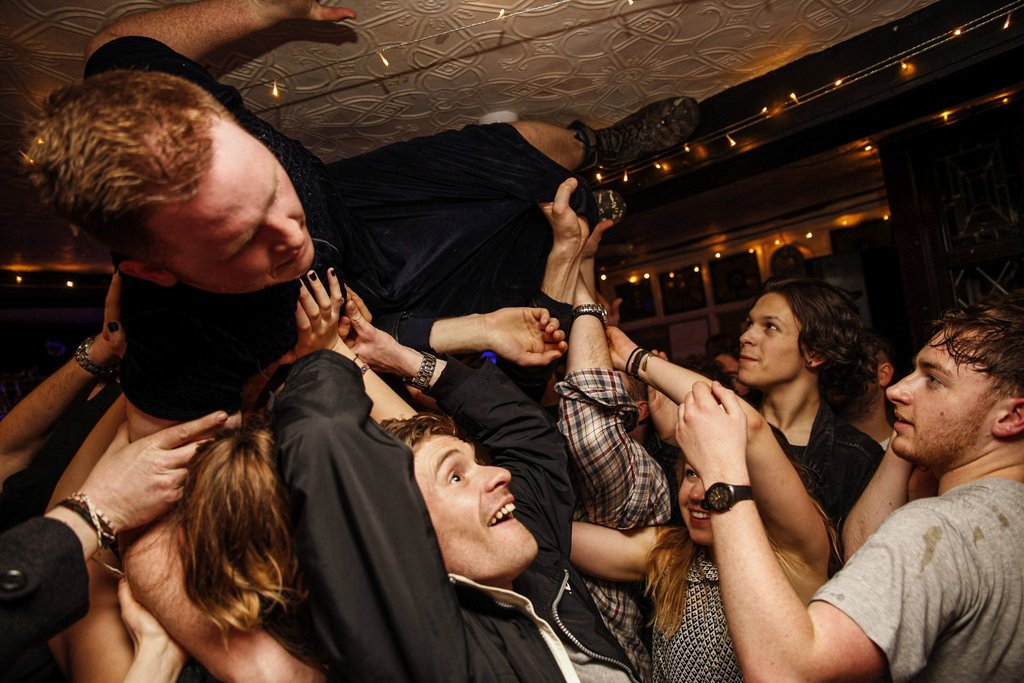 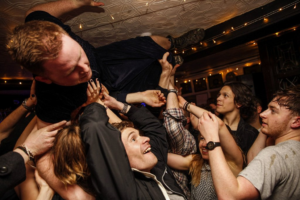 Its a Saturday night and one of the most popular bands in East Anglia are playing in the centre of the Suffolk capital.

What could possible go wrong?

Roy are a duo comprising of a man with a hat on guitar and a cheery drummer fumbling their way through tunes made by someone with a Sonic Youth album or two.

It’s noticeable that the guitar is in charge here and these tunes with odd timings are enough to differentiate this duo with many other bands sporting the same line up of personnel we bump into a lot nowadays.

Rad Pitt play like Enter Shikari without the disco beats and Extreme Noise Terror with some catchy verses attached to the mayhem. The bearded vocalist, who looks like he should be selling cereal for a living in East London makes us jump as it’s not realised for the first five seconds that he, the bloke standing casually next to us is in fact the bloody singer !

Dingus Khan are going to be on half an hour early.

It seems the support bands even wanted to get their job done for the night so they, like everyone else could see as much of Dingus Khan as possible even though it’s established as time goes on that this pub is one of those city centre pubs, tucked away in the corner of a shopping area that seems to be open for ever.

Dingus Khan arrive onto what would probably be a stage if it wasn’t at ground level and are sporting two bass players, two drummers, two guitarists (well OK, strictly speaking its a Uke) and a singer with a cardboard box on his head.

At least five people are singing, sometimes without any musical accompaniment and its noted the drummer has his hours worth of alcohol intake lined up behind him before he’s even assembled his drum kit.

Singer Mick Squalor (as he’s known to his showbiz mates) crowd surfs to the bar, crowd surfs back, a man collapses at his feet, is lifted up, falls down again and the only way to eject him is by carrying him over to the front door where he remains in a heap on the pavement.

The songs are ace, exciting, catchy, raucous and anthemic enough for everyone to raise their glasses. Real glasses not those wobbly things we get in the capital.

There’s a bit of a sing-along going on in between the verses. There’s a bit of drinking going on between choruses, they’re calling for an ambulance, they’re complaining about waiting too long in the self service checkout and they’re even whistling like Roger Whittaker. Glasses smash, people cheer, punch the air and stagger home without even realising the clocks have gone forward, England have beaten the Germans at football and its even stopped raining outside for ten minutes.

If you couldn’t be in this particular English town on this particular Saturday night watching this areas favourite band then you may have to put up with second best once Dingus Khan get around to releasing a second album and hopefully visit where you (or I actually) live.

We imagine it’d be just as raucous elsewhere to be honest.

Dingus Khan don’t do quiet nights out, but if they did . . . er, then we’d probably have quiet nights in ourselves or make sure we were at something else equally enjoyable so it’s probably wise that these blokes stay off our streets every now and again.