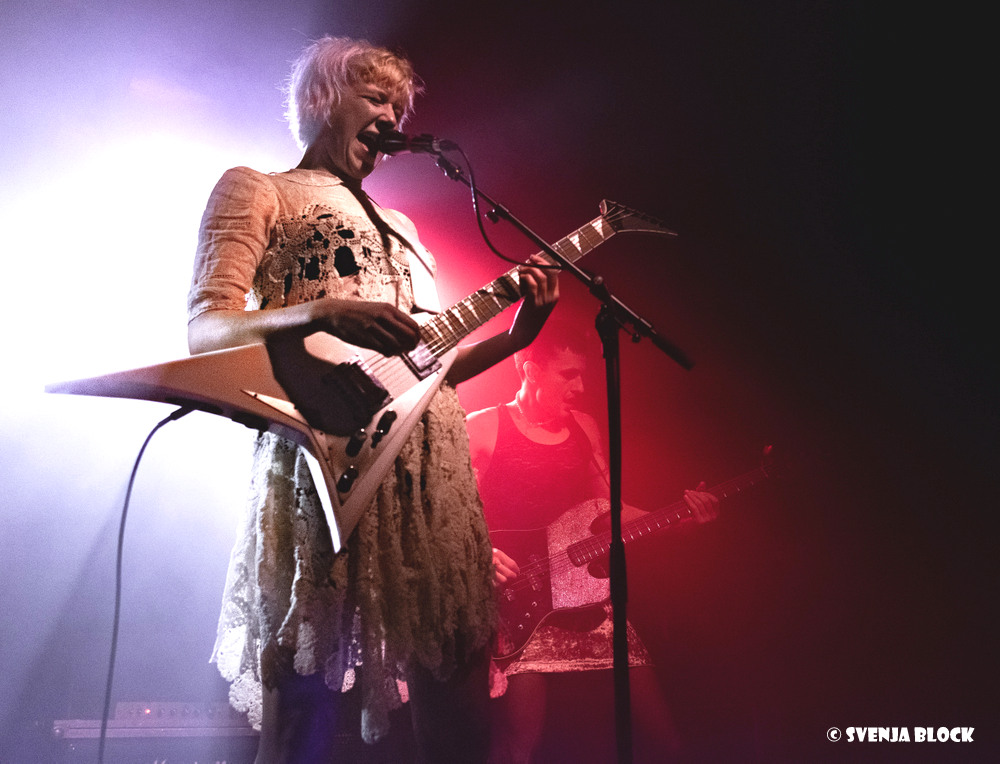 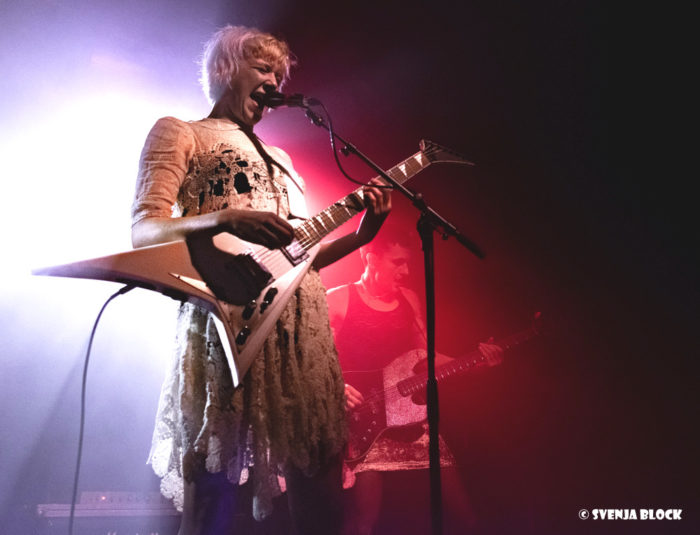 Dilly Dally rocked The Garage with LTW’s Andy Duke in London but, at the last minute, discovered that something was missing. The audience helped them to find it.

It’s a sign of an eventful gig when a performer calls upon the kindness and generosity of their audience. Pete Townshend, for instance, famously asked a San Francisco crowd “can anybody play the drums?” after The Who’s skin-basher, Keith Moon, collapsed due to elephant tranquiliser ingestion. Similarly, but albeit with less drama, Dilly Dally’s Katie Monks is plagued with a show stopping dilemma just prior to the quartet’s penultimate song at The Garage in London. With a white Flying V guitar around her neck sporting a broken string dangling from its pointy headstock, the Toronto-based lead singer breaks the fourth wall with an unexpected request. “I can’t believe I am saying this but does anybody have a capo?”. She nervously scans the attendees for assistance but help is by no means immediate.

Eventually the silence is punctuated with a polite ‘yes’ from a good Samaritan in the crowd. And the elusive device, a clamp that attaches to a guitar’s fretboard to transpose a song’s key, is handed to the band’s figurehead. It speaks volumes about Dilly Dally. Despite their musical tightness and confident delivery this evening, there’s a refreshing sense that the show could fall apart at any minute. Which, in 2019, is a welcome prospect as danger is a rare commodity these days on the live stage.

Despite two critically acclaimed albums to their name and a much-deserved buzz in the press about the noises they make, the quartet’s short tour of Blighty appears to be a DIY affair. There are no techs or roadies present and, seemingly, very little in the way of back-up gear including the aforementioned capo. While some may see this as a sign of a group who wish to ‘keep it real’, I view it as a symptom of the high costs of being on the road for a band who are passionate about touring. And that love of performing is felt the very instance Dilly Dally hits the stage.

The Canadian alt-rockers kick off their set with I Feel Free. Backlit with a stark bright white light that wouldn’t be out of place in an operating theatre, the band initially appear as silhouettes. Being a track that builds rather than hitting the ‘hell bent for leather’ switch from the outset, this highlight from their 2018 album, Heaven, showcases the foursome at their very best live.

Katie Monks’ vocals effortlessly run the gamut between a sweetness that recalls Mz. Moxy in the first verse to an unhinged and possessed roar that brings to mind Sofia Martins’ incendiary screaming in Starsha Lee by the outro. While neither of the singers I just name checked are household names, I felt it was necessary to deviate from the conveyor belt of comparisons the band usually gets to likes of the Pixies and Nirvana. More importantly, they serve to represent two vocal references that couldn’t be more disparate stylistically yet still make perfect sonic sense when paired together in Dilly Dally world. 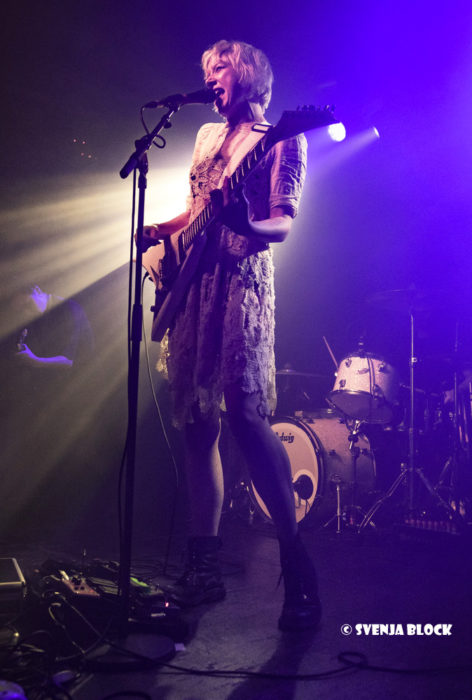 Although Monks’ powerful vocals are centre stage throughout the twelve-song set, Dilly Dally’s primary strength is their collective chemistry. Their formidable and powerful rhythm section, featuring Ben Reinhartz’s thunderous drumming and Jimmy Tony hard hitting bass, provides a highly dynamic foundation that embraces restraint and unleashed aggression in equal measure. Anchoring the vocal melodies with dramatic and often hook-laden textures is Liz Ball. Coaxing sounds out of her 1966 Gibson Melody Maker that Joey Santiago or Graham Coxon would be envious of, Balls’ intelligently voiced guitar parts create both earworms and a sense of unease. Not that these are mutually exclusive. Of equal importance to her vocals is Katie Monks’ rhythm guitar work. Acting like mortar to the band’s twin guitar attack, the interplay between Monks and Ball is a multi-layered and outstanding force live.

Lighting for the gig is a synesthesiac’s dream with songs having very specific colour themes. Sober Motel, for instance, is drenched almost exclusively in royal blue, Doom is Martian red and Snake Head celebrates all things mauve. These changes in colour are likely to be deliberate as, despite their intensity, Dilly Dally are quite a static proposition onstage. With the exception of Jimmy Tony’s occasional ‘rocking out’ moments, usually occurring after he engages his Fender Aerodyne Bass into overdrive, the band are largely focused and still. That said, a performance need not be a three-ring circus in order to be entertaining. With the exception of her enquiry about a capo being available for use, there’s very little in the way of onstage banter from the band. That said, the group ooze a quiet charm despite their detachment and Monks comment about loving London is well received by the locals.

While Desire and The Touch are clear highlights of the performance and enjoy the highest number of ‘smartphones at the ready’ respectfully, all of Dilly Dally’s songs translate extremely well onstage and are deftly conveyed. While I’d liked to have seen more audience engagement on the night, I am impressed with how hands-on the band are with their show. From Monks, quite literally, dilly-dallying with her pedalboard settings mid-set to rushing backstage to grab a Fender Jazzmaster for a change of sound for just one song – this lot clearly care a lot about how they sound. They just need to show the audience that they’re cared for equally. Just that little bit more. 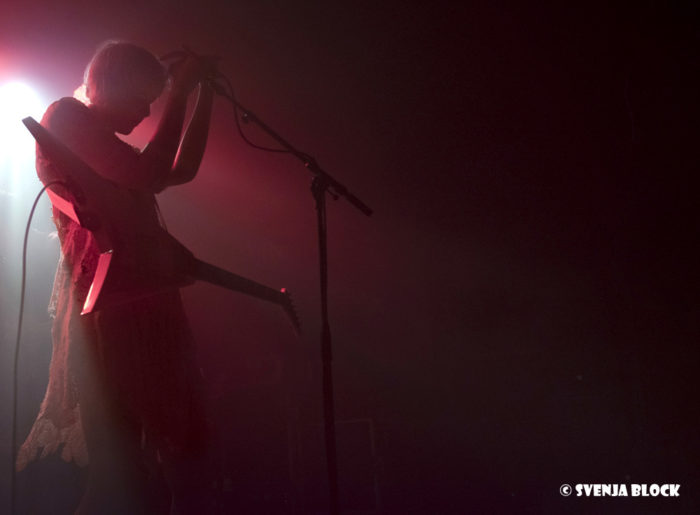 Please note: Use of these images in any form without permission is illegal. If you wish to use/purchase or licence any images please contact Svenja Block at blocksvenja@yahoo.com.Watch Dilly Dally’s sumptuous video for I Feel Free here.