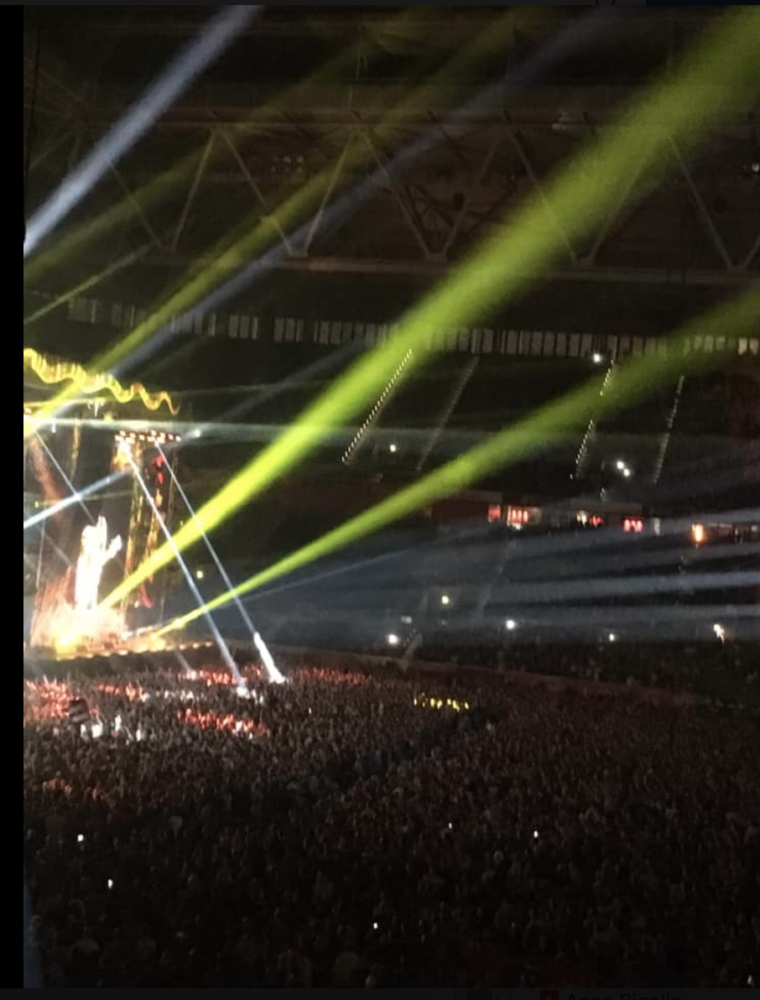 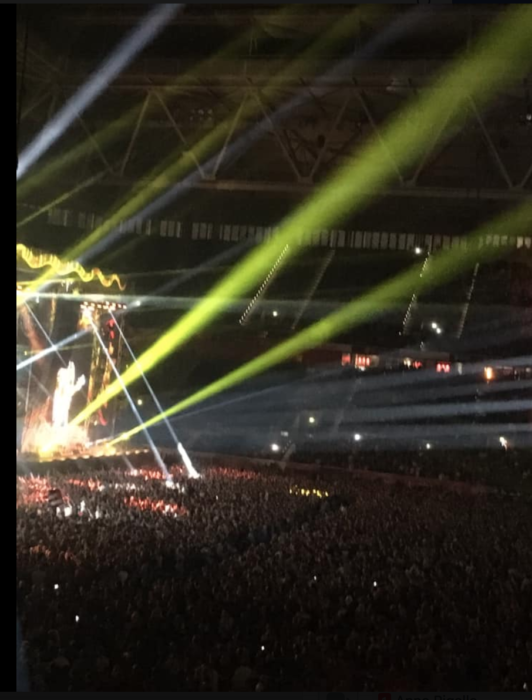 Watching Die Toten Hosen in Germany is like nothing else.

In the UK they may be seen as one of many good time party punk bands with a decades long history and set of tight road worn anthems but in their homeland, they are gi-normous, insanely popular – enormodrome, supercalli stadium-packing hu-mungous, mighty huge.

Tonight there are 45 000 Germans in total awe of the local legends and in punk rock party mode singing along to the band on their second night of a sold-out stint at Dusseldorf’s glistening and perfectly designed for big events modern and huge football ground.

There is something fantastically odd about standing in a stadium of 40 000 people watching a band that you have little familiarity with delivering huge singalong anthems surfing on high decibel audience football singsongs cranking the huge choruses into the oddly warm and sticky night sky.

The size and spectacle of this gig is creating an enormous and quite brilliant mind fuck.

In the UK Die Toten Hosen (German for The dead trousers) are fringe punks. For many of the UK punk brigade they sit somewhere in the punk rock hinterland with some people having a notion that they do ‘quite well’ in their home country.

This ‘quite well’ is shows like this on a scale of U2.

The atmosphere is electric and the band have that soundtrack for people’s lives thing about them. There are mass sing-alongs, a massed army of  band T-shirts and a total celebration of a group that have scaled the slippery height of showbiz with the most unlikely of musics to become one of the biggest in their home country whilst somehow playing various versions of ye olde punk rock.

I’m at this massive gig with legendary original punks Jordan from the Sex shop and Marco from Adam and The Ants. Both came from a time when punk was a tiny scene of 100 people and revelled in its exclusivity. A very different world from this stadium version of the world they were both key to creating. Punk now embraces when it used to repel. Neither version is wrong and for the record Jordan loves the gig and even Marco is warming to the band!

On every level this feels bizarre. This kind of music is shunned in the UK. A band like Die Toten Hosen would be lucky to play in the back room of a pub in the UK. Unless they were American. Then they would get to play to a couple of thousand. This is what near relatives like the Dropkick Murphys do. Homegrown stuff on this scene in the UK barely gets a nod even if its equal in its capability. That’s just the weird way things are.

The stadium doesn’t stop roarings the band who were founded in Dusseldorf in the early eighties deliver a mixture of their template humour laced anthems, folk punk knees up and point and political stripped down material faultlessly. This comes complete with a huge production with giant flickering video screens and a big light show.

Somewhere in the middle of the gonzoid dayglo light show you glimpse their studied, beautifully lived in,  middle-aged faces looking a cute mixture of thrilled and bemused by this ongoing success in their home nation where they have become very much part of the fabric with their gigantic songs that still are laced with a deep love of the foot soldier bands of the movement like the Vibrators or the Adverts whose brilliant frontman TV Smith they have embrued and ever recorded an album with because despite their huge success they are still part of the punk rock family and look after that family and its that side of them that is truly heartwarming.

They started in Dusseldorf years ago, another bunch of scruffy punk drunks in love with the form. They were a tail end of the second wave crew of ragamuffins who were playing for laughs and were fuelled with drink and that kind of daft humour that leaked into the punk idiom like a stray belch at the end of its initial explosion.

I remember a John Peel session in the early eighties that was a pretty nifty piece of work – it had power and a smirking imagination that took it somewhere else but then there seemed to be a an ongoing radio silence in UK terms. Now and then their name would crop up in this kind of unlikely ‘doing well in Germany sentence’ and they would breeze through a mid bill hoedown at Rebellion. They turned up in Manchester a decade ago and played a tiny venue and seemed heartbroken at the small crowd but even then they were hauling in thousands in their home country landslide tsunami success.

What has made them so grosse? Perhaps it’s their singing in German and creating a genuine home tongue take on the anglo American form? Maybe it’s the cramming of their songs full of a very homegrown style of humour that hits home? maybe it was their album where they combined German Schlager drinking songs with their punk rush? Maybe it was there innate understanding of terrace culture  and that German football ground feel of still being allowed to stand and sing beery songs with your mates whilst drinking in the ground camaraderie culture? maybe it was this ability to make sense of the attractive rush of UK punk rock with a very German take on the affair that gave them a huge home country advantage and made it equally difficult for them to go anywhere else?

Die Toten Hosen have some taken their unpretentious, singalong punk and stretched its fabric in every way possible.  There is a string section for some folk punk knees up, there is the glam tinged anthems of early UK punk, there is the gravel throated intensity of St. Joe Strummer, Jake Burns and the Rancid street punks, there are quite introspective songs that pull on heart strings, there are badly and lewd knees up punk rushes and there is their punk rock version of You’ll Never Walk Alone because their singer, the big hearted and lanky local legend and renaissance punk, Campino is a Liverpool fan and mate of the oddly similar leaping around gangling Jurgen Klopp.

They may have made their mark with their grin-along lyrics but there is a powerful social conscious with their heart on the sleeve political songs delivered with an old school punk rock intensity.

They ally this with big enormous songs with Kop style strum and drang choruses that fill stadiums to rafters and make impressive community singing for a huge crowd that have the glazed eye devotion of punk rock messiah seekers.

There is something quite heart warming about this zeitgeist defying, outsider band storming the citadel of good taste with their still raw street punk edge and impassioned verses and huge ‘wooooagh’ whoosh chorus punk rock being delivered in a stadium.

It feels like an off sort of victory that one of the thousands of great punk bands that slog around the world actually got the chance to really speak to the people. The gig could have been a mere high decibel spectacle but the band transcend this with their heartfelt intensity.

And thankfully they didn’t wear shorts on stage…