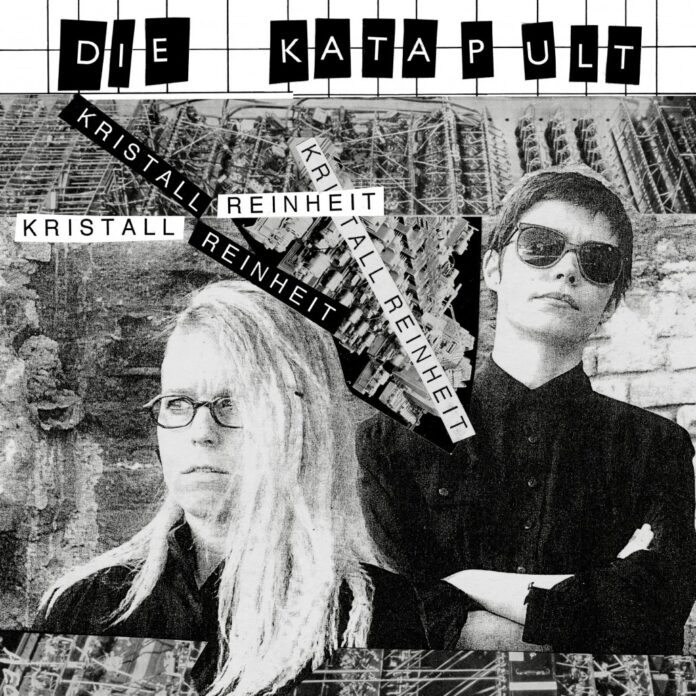 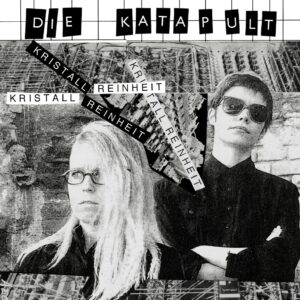 Ever heard of Hiroo Onoda? Perhaps not, but in a roundabout sort of way the tale of Onoda came to mind when I heard ‘Kristall Reinheit’ the debut album from Spanish-Swedish duo Die Katapult – Onoda was a Japanese soldier who refused to surrender after World War Two ended and subsequently spent 29 years in the jungle on Lubang Island in the Philippines, he remained in the jungle because he did not believe that the war had ended, not emerging until 1974.

In a similar fashion Die Katapult appear to steadfastly refuse to acknowledge that electronic music has developed beyond that period stretching from 1980 to 1982, the point that Casio keyboards, and Korg drum machines became affordable items, and synth pop was born; bands like Drinking Electricity, and Tik & Tok hinted at a new direction, and for a while punters flocked to The Cage – Rusty Egan’s Kings Road record store, I have this romantic vision of Die Katapult ensconced in a midi free studio, the floor strewn with a rats nest of cabling – Die Katapult probably create their spluttering electro-pop in an air conditioned, glass and chrome church to technology; despite this ‘Kristall Reinheit’ is primitive, or at least its primitive sounding.

Opener ‘Braun’ is constructed around the most basic of machine driven beats, Anna Fredriksson’s Mediterranean twang fed through a vocoder to add warmth to the clinical sound…’Schweinsteiger’ continues in this vein, though the pace is more dancefloor orientated, the entirely German lyric apparently being a paean to the ex-Bayern Munich and current Manchester United midfielder Bastian Schweinsteiger…’Kristall Reinheit’ reduces the pace, it’s almost sultry, with Kraftwerk style keyboards refrains offering slivers of colour, the entire track neatly contained within 2 minutes.

‘Hallo Punkten’ could have Stereolab’ legal team paying close attention, but then mimicry is the greatest compliment – to be fair, those early electro artists like Drinking Electricity could level similar claims at Stereolab; the track is an array of bleeps and pulses, semi whispered sensual vocals washing across synth sounds before the lead vocal propels you forward or backward dependent upon your knowledge of electronic music…sadly the promo of the album arrived on CD, the album itself is released on 10” white vinyl, so you will get the chance to flip to the B-Side and opener ’Frieden’ an assault of electro-pop rhythms, the song being based on a scientific book about musical waves, may years ago this would have had the dance floor at Billy’s in a lather…’Deutsche TV’ would have been the time to head to the bar – actually in Billy’s it would been the time to head to the toilets to reapply your kohl eyeliner whilst Die Katapult writhe around this inter planetary ode to Major McLane, the star of the 60’s German TV show Space Patrol Orion; now that’s niche subject matter!!

‘Euromillionen’ confirms that Die Katapult are currently breathing, the album not being some long lost relic discovered in Hansa Studio’ – more syncopated pulses overlaid with simple yet effective melodies as the lyric confirms that the weekly chance of fortune is almost impossible; closer ‘Die Katapult’ features an aggressive, gnarly five note keyboard refrain that in 1980 would have delighted listeners of Fad Gadget singles, the sleek pop being twisted into pre industrial spectres..

‘Kristall Reinheit’ is a bizarre release; part statement of intent, part historic document – now, and then; and that I think is its charm, particularly as its only available on vinyl, though be quick as there are just 500 on offer.