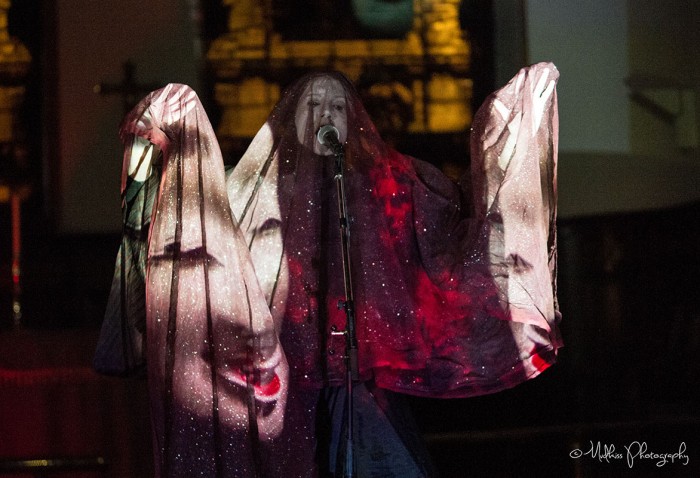 So, it all began one cold and wet night in a dimly lit church in Salford, the venue is the hidden gem of Sacred Trinity Church just around the corner from Salford Central railway station. Tonight, we’re here to watch Sensorium, the first-ever headlining set by Belfast performance artist, musician and film composer DIE HEXEN. Along the way, we’ll be witness to some bizarre and mind-expanding, undead shenanigans and I’ll discover an artist who goes straight onto my most enjoyable in 2015 list.

The opening act is London-based experimental duo, Gentle Stranger, who commence after an ambient, warm-up soundtrack (which becomes gradually more aggressive and industrial). They appear before us as two shrouded figures in front of the high altar. They are whited-up with body paint and we speculate as to what or who they represent. I go for ghostly Heralds but Mel goes for Priests performing some kind of ceremony. Whichever, Gentle Stranger proceed to mesmerise the small, but exclusive audience with a truly unique piece involving a megaphone-cum-hat, a trombone, an accordion, a flute and, er, a dead bird in a handkerchief (you did read that correctly). Their extended mantra of, Love me like that, reverberates around my head long after they’ve disappeared back into the white noise. 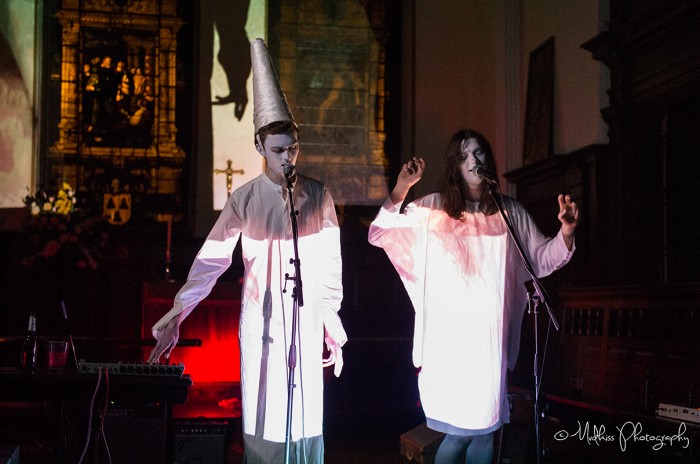 Salford artist Ruth Bate is appearing next, he also plays in the band Modern Blonde and likes to say that he makes ‘music for humans’. We’re surprised to find that Ruth is a he, and also comes whited-up for his guest slot, albeit with talcum powder rather than body paint. He looks like a cross between Jim Thirlwell and Heath Ledger’s Joker, confirming my suspicion that we’re watching the undead perform their Danse Macabre. Bate unexpectedly takes his place in my heart crooning away in an electronically-enhanced baritone that puts Andrew Eldritch to shame! It’s deeper than the bowels of Hades and his Electro-Goth/Industrial backing music coupled with an insane stage routine puts him firmly on my list of best new discoveries in 2015 (at one point, he mimes playing a violin which turns into a “cutting” action of self-mutilation whilst simultaneously crying and laughing). The guy is a sensation, but I’m willing to bet that he wasn’t born when I was watching long-term The The associate Jim Foetus/Thirlwell being harangued by Muriel Gray on Channel 4’s “The Tube” in 1985. 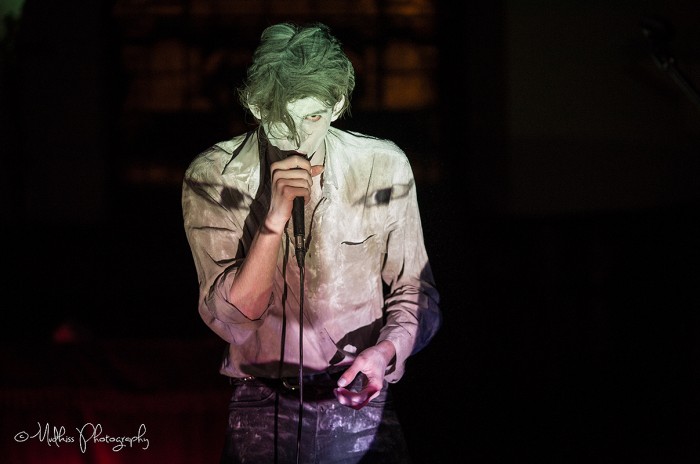 And so from the grotesque to the uncanny as we await the inimitable DIE HEXEN herself, from our front row pew. It is a wonderfully atmospheric setting in which to experience such a rare event. An image of what could be a Japanese Death Mask has been projected onto the stained glass window in front of us for the entirety of the (connected) event, at variously posed angles. This motif continues as a spectral apparition amorphously floats into view for Sacrifice Your Face. 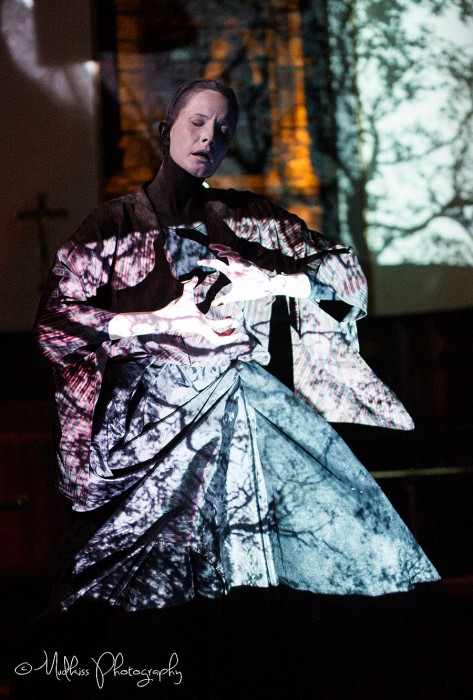 DIE HEXEN’s other-worldly movements are spell-binding. We could swear that we’re watching an actual ghost in the smoke-filled space. Covered in swirling veils, she stands with her back to us shape-shifting to her newly-composed music. The aforementioned mask seems to rise up from the altar to be placed on the back of her head creating an illusion that we’re looking at her from the front. During Inhuman she reveals her white, skeletal face to the darkly sensual music. Projected images of white flowers make me again think Japanese and, later, I will learn that this performance is based on the art form of Butoh, an Eastern style which associates white with death (in the same way that Western eyes associate it with black). DIE HEXEN displays a kind of inwardly positioned Kung Fu dance, always controlled and very slow.  Hunter is presented next, with Cocteau Twins-style vocalisations, the projected colour red gives us blessed relief from the total white-out of the evening. 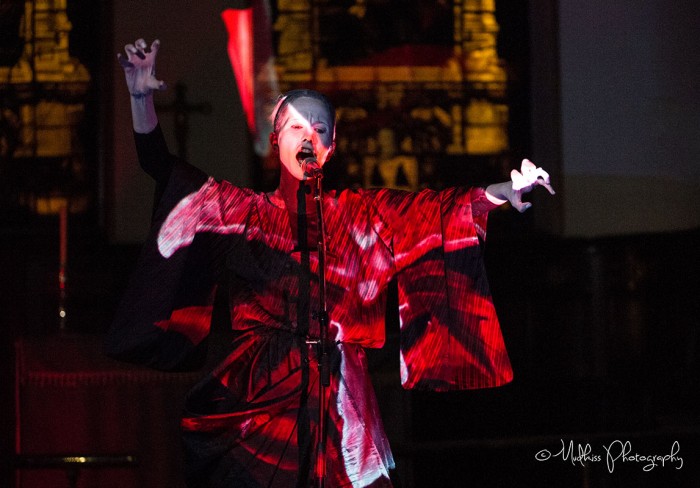 As my favourite moment of the evening approaches, we’re focused on her face through the smoke and mirrors of her lighting rig for My Blood. Musically speaking, it’s the finest on offer and it’s certainly my own highpoint of an outstanding presentation. The Electronica combines so well with DIE HEXEN’s detached, ethereal voice as a new player emerges to face our Priestess. This acolyte is subjected to a shimmering, bird-like dance before she falls stricken to the floor, dead. During  SexDeathRebirth, DIE HEXEN sings mournfully to this lifeless figure against a Japanese-style, musical background. It is to no avail, however, because the poor acolyte does not return to life. Penultimate piece,  Butoh, sees our protagonist going inside herself as an instrumental, Joy Division-esque number plays out. Finally, we are left in a state of total, complete awe due to the Witch’s repeat of her bird-dance on Swords and DIE HEXEN joins her young apprentice in the grip of death.

I have absolutely no idea what I’ve just been a party to (although I’m reliably informed that it was about Life, Death and Rebirth) but it gave me a feeling of privilege to have been entranced by it, anyway. DIE HEXEN transports us to other worlds, other emotions, and other places that we might not have ever considered visiting. The memory of this incomparable performance will stay with me for many a moon. You missed something very, very special tonight, Manchester.