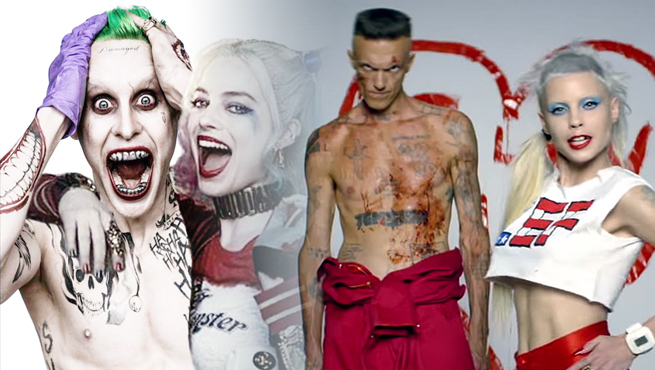 Not happy at all.

She has seen the new hit superhero movie Suicide Squad and feels that the film has ‘jocked’ her band’s style.

In an Instagram rant she takes  David Ayer, the director of anti-hero comic book blockbuster to task for the film’s aesthetic of walls full of black and white graffiti, lead stars Ninja and Jared Leto’s twin penchant for wearing massive trench coats with no shirt underneath, Harley Quinn copping Yolandi’s style of rocking three watches at once, and lots of other little details that “other people won’t see but we notice”.

‘yes David Ayer u jockin our style. callin ninja up before your movie came our pretendin 2b down, so it looks OK when u bite our black & white graf style & our opening sequence to umshiniwam & an all da lil tiny details u nibbeld dat other people wont see but we notice. Cara & Jared told us how much u were talkin abt us on set but u never asked our permision to rip us off. An when ninja texted u sayin wassup wif dat u said nothin like a scared lil bitch. U were jus flauntin our names pretendin to b down. u aint down an u never will b. but before we knew da extent of ur two face nature – u invited us to ur movie premiere(which i didnt wanna go to) but ninja went , tinkin ur solid guy an mayb there was jus a lil “misunderstandin”. Den poor ninja had to sit thru dat hole bullshit movie. An u even got da nerve to say wassup to him smilin – an ninja has to b nice cus he is there wif his kid. But we all tink u wack. U shud start a crew called:,”im a fake fuck” ask kanye if he wants to join u. Cum show ur pretty face at my studios. U know Muggs & u know where da Soul Assasin Studios at. we watin for u. @djmuggs_the_black_goat_ @zef_alien @boojie_baby_ @ragingzefboner @_dark_force_ @dejanvisser @djhitekisgod @jipsi518’