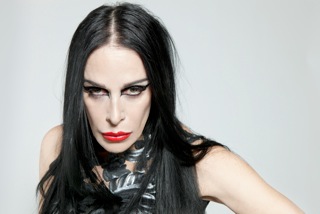 The brilliant Diamond Gallas has returned  with not one but two new albums.
Vocalist, composer and avant-garde icon Diamanda Galás has announced the release of two new albums, her first since Guilty, Guilty, Guilty (2008).
All The Way, a collection of radical re-workings of traditional and jazz standards, and In Concert at Saint Thomas The Apostle Harlem, recorded at the titular church during the Red Bull Music Academy Festival 2016, are out on 24 March and will be released on Galás’ own label Intravenal Sound Operations.
Today Rolling Stone premiered Galás’ interpretation of All The Way, written by Jimmy Van Heusen and made famous by Frank Sinatra as well as the traditional O Death from All The Way.
Listen to Diamanda Galás – All The Way
Listen to Diamanda Galás – O Death
All The Way features remarkable, radical takes on familiar tunes, including the seminal The Thrill Is Gone and a solo piano interpretation of Thelonious Monk’s Round Midnight. The album’s centrepiece is the American traditional O Death, which has become a staple in live performances, and concludes with Pardon Me I’ve got Someone To Kill by country singer Johnny Paycheck.  All The Way includes both electric live recordings (recorded in Paris, Copenhagen, and East Sussex) and studio recordings made in San Diego, CA.
At Saint Thomas the Apostle Harlem documents Galás’ volcanic May 2016 performances as Saint Thomas the Apostle church in Harlem, NY, described by the New York Times as “guttural and operatic, baleful and inconsolable, spiritual and earthy, polyglot and wordless, nuanced and unhinged”. The concert, produced by Intravenal Sound Operations and Red Bull Music Academy, was composed exclusively of what Galás calls “death songs”. Sung in Italian, German, French, and Greek, the performances include Galás’ dramatic settings of death poems by Cesare Pavese and Ferdinand Freiligrath, as well as renditions of songs by Jacques Brel (“Fernand”, “Amsterdam”) and Albert Ayler (“Angels,” sung by Galás, who has always believed that Ayler’s work is also vocal music).
Taken together these albums showcase the work of an artist at the height of her power and creativity, demonstrating mastery not only of her voice (for which she has become so well known), but also of the piano, and as a composer.
Diamanda Galás will be touring these “death songs” around North America and Europe this spring, will full dates to be announced shortly.
The composer, vocalist and activist Diamanda Galás is one of the most uncompromising and influential avant-garde performers of the last thirty years, with an extensive catalogue of work that is often oppressive but always thrilling. With a searing voice and background in classical and jazz piano, Galás has continually asserted the connection between her art and activism, tackling subjects like torture, genocide and AIDS in philosophically thoughtful and musically incendiary ways. Galás has previously collaborated with musicians varying Led Zeppelin bassist John Paul Jones to influential composer Iannis Xenakis, in addition to numerous others, and her vocal technique and performance has been cited as an inspiration by such performers as PJ Harvey and Anohni. Over the past few years, Galás has been working extensively in Europe, in particular on the theatrical performance “Das Fieberspital (The Fever Hospital)” — based on the writings of Georg Heym, Gottfried Benn and herself — at the Grokowski Institute in Wroclaw, Poland.
Pre-order All The Way and In Concert at Saint Thomas the Apostle Harlem: https://diamandagalas.myshopify.com/
Diamanda Galás – All The Way
Out 24 March

Diamanda Galás – At Saint Thomas the Apostle Harlem
Out 24 March