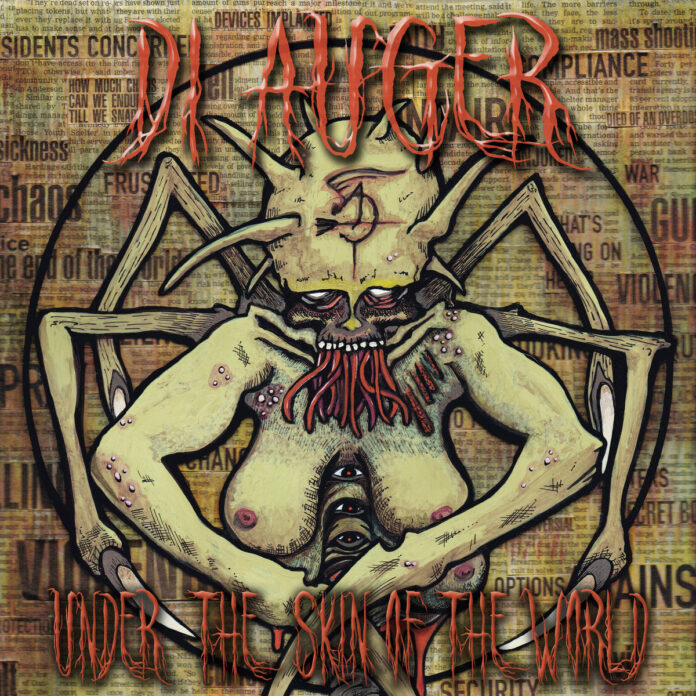 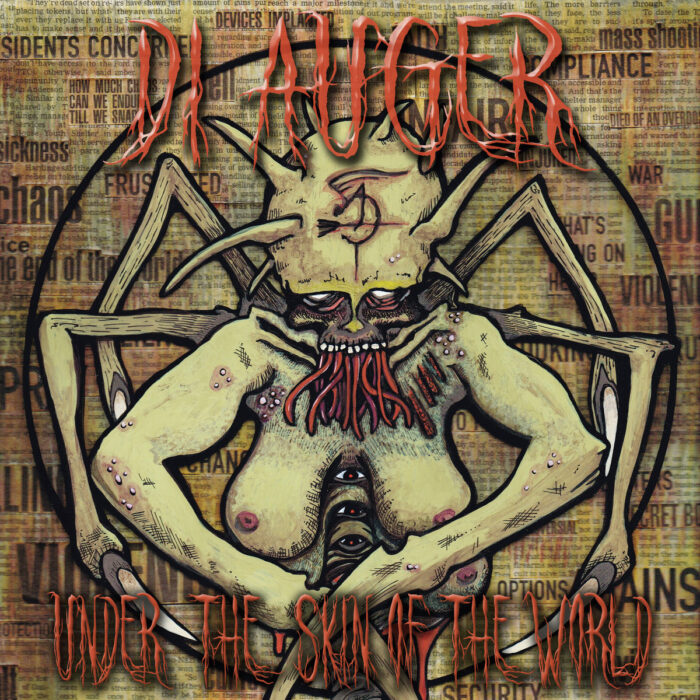 Toronto’s Di Auger have been a mainstay of that city’s music scene for many years now and C. Lafort, the artist behind Di Auger, has done much to enrich and develop the Toronto scene with his DJing, podcast, visual arts and fine artwork. During the pandemic he has concentrated on releasing his first album since 2017’s Drinking Songs For The Dead, a concept album called Under The Skin Of The World.

In the era of streaming, music on the go and music as background, a concept album is a rare thing and may seem like a commercial mistake, but Di Auger has always gone his own way. A concept album, to be appreciated properly, should be listened to from start to finish, and, ideally, should pull you into the world created by the artist. This is what Di Auger skilfully does, and the album really does repay sitting down and listening to it in its entirety. Though this is no pleasant world to be dragged into – as anyone familiar with Di Auger’s personal brand of neo industrial gothic rock can attest – but a Kafkaesque/Orwellian dystopian vision.

Interspersed with soundbites and interludes, the album hammers home its message of paranoia and protest and the striving of the self to survive in a digital world. Opening track, Everything Is Wrong, sets out the theme of the album, with its dramatic, tense opening and the observations that we are all turning upon each other. From there we embark on a tense, paranoid ride through a world which is turning into chaos, where lies become facts and the rich and powerful fiddle whilst Rome burns.

Skull Orchard (The Devil’s Seed), has a dark, almost rockabilly guitar groove with thunderous chords over the top and tinkling notes like falling acid rain. It is reminiscent of Gary Numan’s recent work. Brave New World is pounding drums but with an almost light melody as a counterpoint. This is the sound of industry pounding the workers into submission. A world where ‘division is the law’ and there is ‘no logic anymore’.

In The Twilight Of Nothing, has a very cool bass riff and industrial beats, evoking bleakness and the feeling of being lost in a world that makes no sense. It’s a nihilistic nightmare as the protagonist ‘dances with god in the twilight of nothing’. I’m suffocating is the refrain in Drowning In Darkness, which is clearly a term loaded with meaning in these BLM times. It has a heavy beat like a pneumatic drill.

Breathe is electro-pop with an Asian melody. The protagonist feels there is no place for him in the world today and wants to find somewhere he can breathe freely. Balls To The Wall has a techno beat with a hard rock, guttural guitar. Likewise, Filth Grenade has a great guitar riff, over drums beating out a rhythm like a ticking time bomb.

By the time we get to the last track, The Light Is Lost, we have been through the horror of this nightmare world, and Di Auger gives us something thoughtful and poetic. It is reminiscent of Bauhaus and imbued with a melancholy and an exhortation to the listener to find their own way in the world, to make a path for themselves out of the chaos.

With Under The Skin Of The World, Di Auger has produced a scathing musical attack on the zeitgeist, and also upped the ante in his own musical journey. It’s by far his best work and deserves to be heard how it was made to be – sit down, distractions off, from beginning to end. It’s not an easy listen, but, then, it isn’t intended to be.