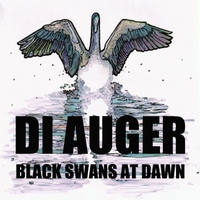 Di Auger is the musical output of Chris Lefort, a well-known face on the Toronto goth scene as DJ, artist and photographer. Black Swans At Dawn is Di Auger’s seventh release.

Toronto has always had a thriving goth scene. Di Auger mixes up goth, industrial and electronica to create Neo-industrial goth rock. A soundtrack to the harsh times we live in that still feels like it offers hope in the darkness.

It is perhaps no coincidence that in these neo-liberal days of repression – so like the 1980s where goth was hatched – that a harsh, dark music has grown again in popularity.

Whilst pure punk rock offers rebellion with (usually) left leaning politics, it has become the music of your dad (or even your granddad) and all politics to a disenfranchised generation is rejected. So the disaffected turn to the darkness to dance away the horror.

The heavy pounding dance beats of opening track Abomination sets the tone. This is dark electronica that pounds at the heart and head. The track Behind The Veil builds up in tension, whilst Pathetic and Optimistic Nihilist explode out of the speakers and don’t let up. The latter is reminiscent of Laibach. Circle of Ghosts could easily have been written for a John Carpenter horror film. At times the vocals are strident like a dictator extolling the crowd, at other times like the chanting of religious ceremony and, as on Rose Eater, the vocals ae down in the mix, bubbling up like a deus ex machina. At times Di Auger can slip into melodrama, as on Rose Of Decay, but this is a minor complaint.

For me the highlight is the title rack, Black Swans At Dawn. A beautiful, dark song that starts with ambient electronica before guttural, harsh chords cut through the sound. Lyrically it is about how we all die, yet we all long to fly, which sums up the album nicely. Yes, this is dark music, but it offers freedom of the senses, freedom of thought, freedom to embrace the darkness and live anyway. To dream to fly.

Well worth a listen.