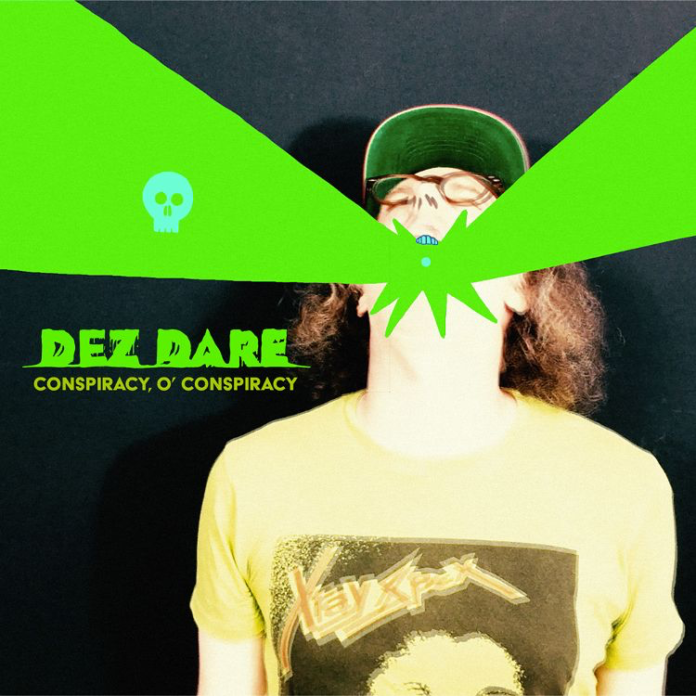 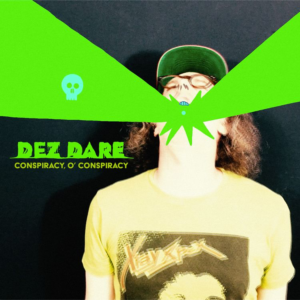 Released May 17th on Ch!mp Records

It would be easy to presume that anyone whose music had been born out of lockdown would be arriving quietly, given the circumstances. Not so Dez Dare, who, having already unleashed his anti-nationalist, full-throttle debut single Dumb Dumb Dumb earlier this year, is ready to give us more with an exclusive reveal of new release Conspiracy, O’ Conspiracy.  It’s another absolute blast of riff-driven garage, accompanied by a suitably eye-catching video directed by Mal Mall you can watch here:

At the heart of this record and its raw, earworm-potential sound, is a serious message about the current spread of dangerous conspiracy theories and their spread through social media. “Deception rides through the wire/Filtered through your digits,” he sings unflinchingly. In his own words, “this song looks at the reasons why we find it difficult as a society to find a balanced and open conversation about nationalism, change, climate, all the issues we face as an animal. If we are unwilling to listen, the bad actors in the world will continue to divide with the worlds most recent terrorist mechanism – Facebook.”

He also spoke to me about it his music and influences in general here.

As a new artist, how would you sum up Dez Dare to the uninitiated?

A fuzz beast clawing out of a pit of noise, riffs, chants and existential joy.

You’ve said the previous record (Dumb Dumb Dumb) was partly born out of a “disdain of nationalism.” What part do you think music and culture play in the fight against it?

All you can do is call it like you see it and hope some people get interested enough to evolve their thinking. There is art on both sides of the battle but the digital era enables music to cross borders swiftly. Hopefully, this sparks collaborative conversations and progressive thoughts.

What three acts have had an impact on you that you’d urge anyone to listen to – one local, one national, one international?

I have broad tastes which all influence you in some way but here are some of the bands I have been listening to over the lockdown and while I was recording the album.

Local – As I still consider myself a Melbournian and I live in Brighton in the UK I have been cheeky and picked two bands.

i. Our Girl – I love the sparsity versus big shimmery guitars arm wrestle this Brighton band pulls together. I saw one of their first shows, a long while back at The Great Escape and they are getting better and better.

National – Girl Band. Another Great Escape find. They have made my ears bleed on many occasions. They are one of the most intense and unique bands around but they are not for the faint of heart.

International – The Leather Nun. An oldie for you. The Leather Nun released The Slow Death EP back in 1979 before they went disco. Two abrasive and abrupt punk classics with two drone noise epics featuring Genesis P-Orridge. JUST. LISTEN. TO. IT.

O Conspiracy  is out on May 17th on Ch!mp Records. The album, Hairline Ego Trip. will be released June 4th and can be pre-ordered here.

Special thanks to Division PR.