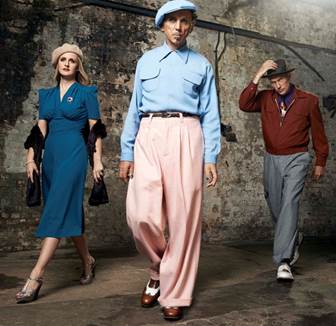 ‘Let The Record Show Dexys Do Irish and Country Soul’

Click here to see the ‘Women of Ireland’ trailer:

Dexys will release their new album ‘Let The Record Show Dexys Do Irish and Country Soul’ on June 3rd on 100% / Warner Music. The album will be the band’s fifth studio set and the first release since 2012’s critically acclaimed ‘One Day I’m Going To Soar’.

The album is a body of work which sees Dexys putting their heart and soul into every track that Kevin Rowland has wanted to do since the mid-1980s. Drawing onRowland and co-producer/core band member Sean Read’s Irish roots, the album is a combination of their interpretations of Irish songs and other select compositions. Each song has been given at least the same level of attention and care as any of their own songs would be. This record is not a stop gap, or a fill in album. It is not a covers album.
“We had the idea to do this album in 1984 or 1985,” says Rowland. “It was to be called Irish and was to feature songs like ‘Carrickfergus’. ‘Curragh of Kildare’ and ‘Women Of Ireland’ – all of which are featured here. Dexys broke up not too long afterwards, so it didn’t happen.”

“Over the years, I would often think about it,” he continues. “The idea of it never went away. I can recall 10 or 12 years ago thinking, for example, ‘If I do ‘Carrickfergus’, I can try this or that.’ Or maybe we can do ‘You Wear it Well’, as the brief had expanded from solely consisting of Irish songs, to songs I’ve always loved and wanted to record. The album was always at the back of my mind.  Then just as we were getting ready to record ‘One Day I’m Going To Soar’, I had an inspirational bolt from the blue, a strong clear feeling that this album should be our next project.’

“The album is called ‘Dexys DO Irish and Country Soul’: DO it, not BECOME it,” he emphasises. “We’re not trying to be Irish, and we haven’t used too many Celtic instruments on there. It’s our sound. We’re bringing our style to these songs. I’m just a guy who follows my intuition, my inspiration. This really felt like the right thing to do. We have put probably more care and attention into these songs than we might have done with our own songs, because the odds were high.  It was important to get them right, and make sure every one of them felt relevant to us.”

Dexys are not a revival band. They are going forward not backward. They changed their name from Dexys Midnight Runners to Dexys in 2012 to say “we’re the same people, but we’re different now!” Dexys is not just Kevin Rowland. It is an eight-person ensemble with a nucleus consisting of Kevin Rowland, LucyMorgan and Sean Read.

Dexys are immersed in style and are madly passionate about their clothes and as such are leading the way in vintage\retro-inspired style. This, says Rowland, is style, not fashion: fashion is for the young, style is for all. Dexys see every photograph, video and every appearance as an opportunity to express their style. In recent years the UK music scene has witnessed female recording artists who have embraced vintage style (Paloma Faith, Imelda May) but never a musical ensemble, or male recording artist. The time is right for Dexys.

There will be events to coincide with this album, the first of which are two special guest appearances as part of the Ireland 2016 Centenary Programme which has been organised by the Irish government to mark 100 years since the Proclamation of the Republic in 1916. As second generation Irishmen, Kevin Rowland and Sean Read are proud to perform three songs from the album at two events in Dublin at the National Concert Hall (March 29th) and the Royal Festival Hall (April 29th)

Drawing on the ideals of that generation which have remained an inspiration over succeeding generations, the festivities go far beyond the formal marking of a key historical moment. It is a once-in-a-century invitation for Irish people of all ages, at home and overseas, to shape and engage in a diverse range of historical, cultural and artistic activities. The programme is designed to facilitate reflection, commemoration, celebration, debate and analysis, and an active re-imagining of our future.

The album’s full tracklisting is: