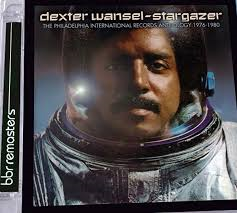 Compilation featuring the keyboard legend and “Philly Sound” mainstay Dexter Wansel’s entire recordings for the Philadelphia International imprint. Ian Canty tastes the smoothest thing ever to come out of the city of brotherly love (apart from the cheese of course)…..

I have to plead ignorance in that I don’t really know too much about America’s fifth biggest city population-wise, Philadelphia. It is in the North East of the States I believe and their baseball team is called the Phillies, which is nice. ECW started there too. But the thing I am most aware of emanating from there is the Sound. A kind of super smooth, orchestrated combination of the best bits of Soul, Disco and Funk, the “Philly Sound” reigned supreme in the mid to late 70s. Even in the early UK Punk scene it had its fans, a complete antithesis of what was being made by the punk bands, but the rolling, pulsating majesty struck a chord with some as they danced at the Lacey Lady at Ilford, apparently.

Dexter Wansel was one of the architects of that Sound with his keyboards being heard on key tracks by the likes of Teddy Pendergrass, the Jones Girls (featured here singing lead on the divine “Let Me Rock You” and “I’ll Never Forget (My Favourite Disco)”, along with Wansel favourite Terri Wells) and MFSB, whilst also finding time to produce the Jacksons on his days off presumably. He began his musical career when still at school age, befriending many of the upcoming Soul/R n B bands that played the city’s Uptown Club where he worked as a runner, making friends with the Supremes and a young Jimi Hendrix among others. After a spell in the armed forces in ‘Nam he formed Funk Rock act Yellow Sunshine but as they did not find success, soon hooked up with Gamble and Huff and the rest, as they say was chemistry, damn I mean history.

In his own solo recording career which is documented here he specialised in upbeat Jazz Funk more than the actual Philly Sound as such, with the odd foray into the lucrative Disco market, but all very highly skilled and groove-orientated. This comp is thorough, but rather annoyingly to me it is structured in one disc of uptempo dance tracks and the other one being mainly ballads and slow instrumental jams – it doesn’t feature the tracks in the order they were recorded and released. It makes sense sonically I suppose, personally I would have preferred the tracks to appear in album order but there you go. It does not detract from the quality of the music though thankfully and unlike a lot of artists working in similar areas Dexter Wansel did not need to often record outside material, being himself a consummate writer.

Though Wansel’s solo material did not meet with huge commercial success, making barely a ripple on this side of the Atlantic and only nudging the bottom end of the Billboard charts, there are plenty of fine grooves here to enjoy. Being interested in astrology, Wansel was a natural to partake in a bit of Space Race P-Funk and though less outlandish than Clinton/Boosty, at times it was just as satisfying. His first album “Life On Mars” was very space-centred as a result of his astral dabbling.

The standout song for me on the entire collection is “Solutions”, a stream of social consciousness which allies sampled radio reports to a mid-paced percussive attack which altogether leads to one prime piece of Electro-Funk. It is truly special. Elsewhere on disc one the uptown sound of “All Night Long” successfully weds falsetto vocals a la Earth Wind and Fire to an assertive horn section and slap bass with the slow moving “Funk Attack” being chock full of squiggly synth thrills and spills. The sorrowful tinge on 1979’s “I’ll Never Forget (My Favourite Disco) acknowledges the end of that era in fine style and “Stargazer” is ready-made for a TV/Film soundtrack.

A little Reggae is thrown in the mix on “Going Back To Kingston Town”, a cautionary tale based on a edgy real life experience Wansel had when encountering some gunmen while on a Jamaican jaunt, but overall the Funk wins out with spacey electronic noodlings working well side by side with Jazz Funk chops. As you would expect, more often than not Wansel’s effortless keyboards are given top billing, but do not detract from the songs or performances of others. He was very generous in that respect.

By its very nature disc two is far more low-key, more for late-night listening than dance floor movers. Most of the ballads that feature heavily on this one are pleasant enough though hardly ground-breaking and the faster instrumentals stand out as a bit incongruous but welcome as they liven things up a little. “The Sweetest Pain” (later recorded by UK act Loose Ends) showcase the beautiful vocals of Terri Wells and Dexter’s “Time Is Slipping Away” is an evocative look back with some fine Jazzy trimmings. The title track from the “Voyager” LP hurtles out at a fast pace, totally at odds with what has come before but all the better for it and the space-obsessed tracks for the debut “Life On Mars” album are nutty but pleasing. I preferred disc one and still think that it would have been far better interspersing the tracks without the “theme” but I suppose in this age of shuffle systems it hardly matters.

Though Dexter Wansel will probably always be looked upon as a “backroom boy” rather than a star per se due to all his work behind the scenes at Philly International, he shows on this collection that he certainly knew how to concoct a winning formula on the dance floor in a number of different styles, often using other contributors to good effect rather like an impressionist artist would use his paints. Patently a craftsman at work.