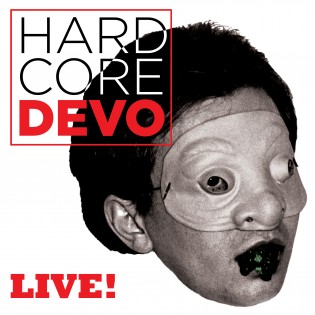 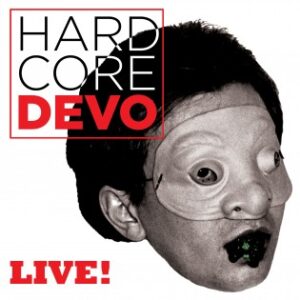 “The Hardcore show for DEVO was like relocating a tail you misplaced a lifetime ago.” Mark Mothersbaugh, DEVO

DEVO remain one of the most challenging bands to emerge in the immediate aftermath of punk, prior to the success of worldwide hits including ‘Whip It’ they, like nearly every other band worked in the basements and garages of their homes – DEVO were based in Akron, Ohio, which when they were presented certainly to a UK audience seemed to add a further air of mystique. I make mention of Ohio as the location is crucial to the raw, angular music that the group defined as ‘Hardcore DEVO’

In May 1970 Ohioan undergraduate art students Mark Mothersbaugh and Gerald Casale saw a student demo within their college campus, the students were protesting President Nixon’s recently announced expansion of the Vietnam War; the demonstration turned into chaos and then tragically turned deadly with the National Guard opening fire on the unarmed students – four were killed instantly with another nine seriously wounded; this event had a profound effect upon Casale “I saw exit wounds from M1 rifles out of the backs of two of the four people who were killed, Jeffrey Miller and Allison Krause, [who] were my friends,” he told one interviewer. “Until then I was a hippie. I thought that the world is essentially good… [That day] I saw the depths of the horrors and lies and the evil. I stopped being a hippie and started to develop the idea of devolution.”

Casale and Mothersbaugh then recruited their younger brothers and drummer Alan Myers and formed DEVO, most people are familiar their 1978 debut album, the Eno produced ‘Q: Are We Not Men? A: We Are “’, this release however looks further back to the very roots of DEVO.

During summer 2014, DEVO performed a series of ten shows showcasing these seminal songs, and rarely played since; ‘Hardcore DEVO Live!’ captures the performance at the Fox Theatre in Oakland, California – what we get are 21 songs interwoven with interviews shining light onto the history of DEVO, clearly the CD and LP are restricted to just the live audio.

The film is beautifully shot, capturing the set perfectly; the stage being laid out to represent the Ohio basement in which the band began, the backdrops painted to look like concrete blocks, peppered with semi opaque panels to represent dirty windows…Mark Mothersbaugh, like the rest of DEVO is sat on a stool; all wearing ‘Hardcore DEVO’ T-Shirts, Mark flicking through a dog eared newspaper before remarking “Nixon says he’s resigning,” his voice distorted to robotic tones “I think 1974 is gonna be a good year” before showering the front rows with a selection of US based cigarette brands, as the jarring keyboards of ‘Mechanical Man’ ring out…this is not just a live DVD recording; the various DEVO members, and fans (inc Toni Basil) pop up at crucial moments to provide context and insight into their attitudes and beliefs when they composed these songs…”we were looking for sounds that were nasty and disruptive”

They certainly achieved their stated aim, still to this day the distorted patterns, and difficult to comprehend time changes of ‘Auto Moondown’ and ‘Space Talkin Blues’ are as much a challenge as a delight, DEVO were pulling inspiration from all directions; I’d never realised just how funky ‘Baby Talkin’ Bitches’ was previously, whilst ‘Fraulein’ reaches back to early rock ‘n’ roll…what I find interesting about the footage is that there is no attempt to rely on lighting, video, smoke – the usual trappings of a rock n’ roll gig; the stage is lit to look like that basement which forces you to concentrate on the music, as you do so you begin to understand just how polarised DEVO must have been from the rest of the world at that time, they certainly didn’t make any effort to alter this – 30min versions of ‘Jocko Homo’ were being played solely to irritate people; the camera regularly pans across the remarkably sedate audience, whilst not irritated some were clearly confused.

As ‘Midget Man’ concludes Michael Pilmer, the bands archivist walks to the centre of the stage carrying a cardboard box, Bob narrates informing us that its late 1976 as the now infamous blue workman suits are distributed to the band who change on stage, abandon the bar stools before launching into their mad-ball interpretation of the Rolling Stone ‘Satisfaction’ – from then on they present a selection of their better known earlier material, this would be the point, in those pre-internet days that those of us in the UK or Europe were first exposed to DEVOlution via their debut ‘Are We Not Men?’ album; by now the gig adopts a more traditional posture, stage lighting, theatrics as they hammer through the genius of ‘Stop Look And Listen’, before delivering ‘Be Stiff’ perhaps the song that propelled them out of Akron, coupled with the headlong rush of ‘Uncontrollable Urge’ this is pure DEVO; by this point the crowd are bouncing around the theatre, whilst a lone stage diver is bundled headlong into the front rows, for ‘Jocko Homo’ they donned the transparent doll masks and blue pre energy dome hard hats…Mark abandoning the stage, mounting the crash barrier for some call and response monkey chanting, though this pales next to the adrenaline charge of ‘Fountain Of Filth’ with its hollered chorus…

‘Hardcore DEVO’ is a very welcome release, both a historical artefact and an reminder that DEVO remain as necessary now as they did when they first entered that Akron basement, in addition to being a fine tribute to departed, original DEVO bandmate, Robert ‘Bob 2’ Casale.