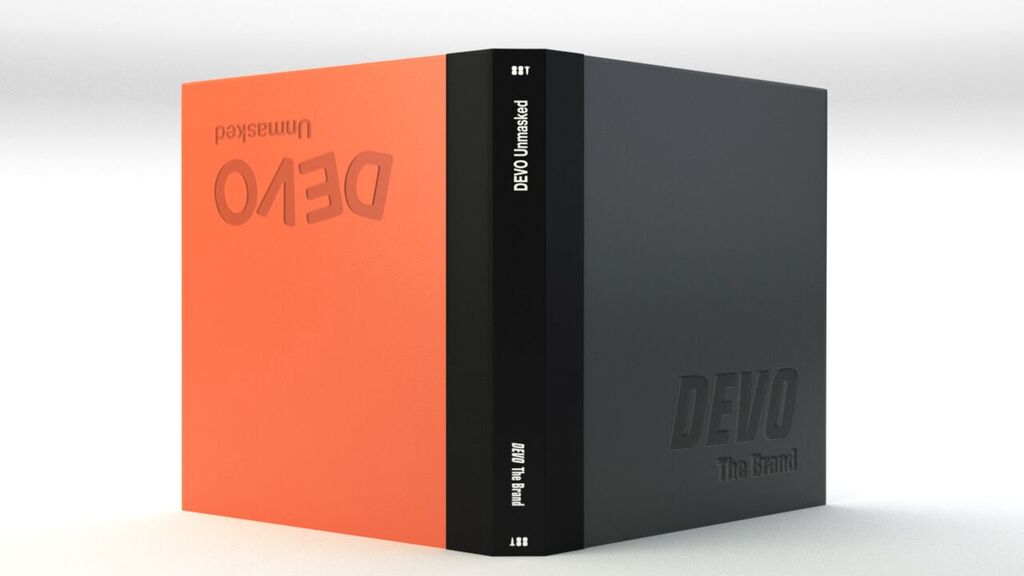 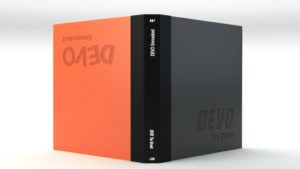 Devo are the oddball American electronic/punk pioneers renowned for their quirky songs, quirkier  costumes and outlandish stage performances. Matt Mead reviews Devo: The Brand/ Devo: Unmasked, an official biography tracing the 45-year history of a much misunderstood band that was always much more than a musical group.

This sumptuously illustrated two-in-one book tells the remarkable story of Devo’s astounding career. The first volume, Devo: The Brand, features music press interviews with major British and US publications, illustrated throughout with classic Devo iconography. Then flip it over for Devo: Unmasked, packed with rare and unseen photos of the band: as children, at university, and at every stage of their career from the early 1970s to the present day.

Co-founders Jerry Casale and lead singer Mark Mothersbaugh write forewords and provide commentary on the photos and their own recollections of the history of Devo throughout both books. As you would expect with Devo, the visual content of the book is stunning with their own mix of Pop Art artwork mixed with professionally-shot studio and concert photos. Also included are photos from their personal collection, featuring the band wearing shorts and T-shirts on stage in their early line-up through to their now infamous work wear overalls.

“Devo has always been a misunderstood phenomenon,” says Mothersbaugh today. “We weren’t trying to do what most people thought we were trying to do, and what we did wasn’t what most people thought they were seeing.  This book, besides being a coherent exposition of how we were officially presented by ‘the entertainment industry’, represents an attempt, akin to a post-plane crash autopsy, to lay things out and let people see what was inside the suitcase.”

Casale adds: “Devo was, and is, an adjective, an adverb, a noun, a Gestalt – a unified concept embracing art, music, politics and fashion with an alternative world view we christened ‘Devolution’. For the first time ever, this book compiles the breadth and depth of our attempts to create something unique against all odds, while fighting the good fight as the world slowly proved that Devolution is real.”

The 320-page book is beautifully presented, printed on heavyweight art paper, with more than 500 previously unseen images including handwritten letters, newspaper clippings, archive interviews and a full discography. It’s available in two editions: a two-in-one version that comes as one complete book for £50 and a “signature edition” version containing two separate books encased in a handmade rubberized clamshell box, in a limited edition of 500 numbered and signed by the band, also including a large, exclusive print of a collaborative work of art by Mothersbaugh and Casale, for £250 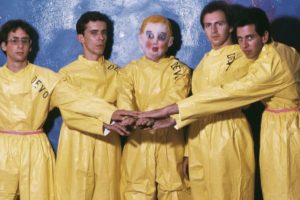 You can purchase the book by visiting the Rocket 88 Books website.

All words by Matt Mead. You can find further writting by Matt as the Louder Than War author archive page.