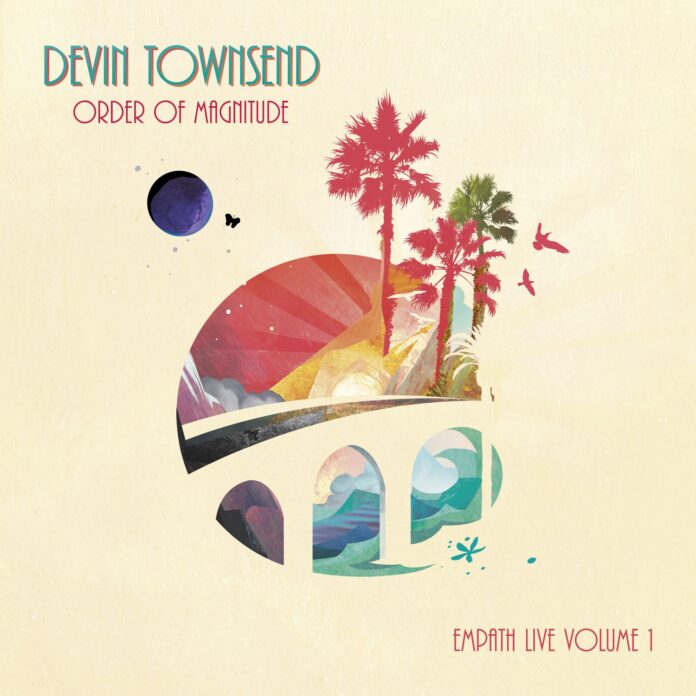 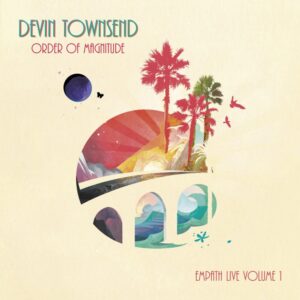 Devin Townsend with the Empath album and this live recording of tracks from that album and other deep cuts from his musical career, has shown himself to be the embodiment of Frank Zappa within heavy metal. It is music full of challenge and breadth of vision, that in an apparent wall of sound, contains a classical music sensibility, and subtle musical shifts, combined with the passion and drive of metal.

At the beginning of this incredible live set, as viewed on the accompanying DVD, the band come on stage with broad smiles, many attired in Hawaiian shirts and bringing with them palm trees, to receive a cocktail from keyboard played Diego Tejeida, whose keyboards are set up like a bar. It’s a suitably joyous and very quirky beginning that is of course pure Devin Townsend.

The 10 piece band on this live set, are muscians and vocalists at the top of their game, led very interestingly by Frank Zappa alumni, the guitarist and keyboardist Mike Keneally. They absolutely of course need to be great players to play this complex and demanding music.

Devin addresses the Camden Roundhouse audience to tell them, “For the next two hours we invite you to go on vacation with us”, before launching into the reggae influenced and lilting introduction to Borderlands from the Empath album. This is one of the absolute highlights of the Empath album, with its tricky dynamic stop/starts and fabulous bass and guitar flourishes from Nathan Navarro and Mike Keneally. Together with the utterly massive central riff that makes you wish you had been part of the audience that night, dancing and head banging to this utterly infectious music. Midway through the song, Devin says “We are so inundated with depression in this day and age, by the end of the night we will be doing the Macarena”.

Evermore, that follows, in contrast, is full of prog like precision shifts of musical signature, accompanied by some emotionally soaring harmony vocals, reminiscent of prog giants Yes. It is completely compelling and demonstrates the wide compositional and sonic palette Devin is now working from.

War from the Infinity album starts off with a military sounding beat, before moving into a rolling jazz like rhythm. It has the most amazing musical section where the band are in almost telepathic sync, with a collective wall of immersive metal sound, where instruments and voices are as one, while still sounding distinct.

Ain’t Never Gonna Win takes the music into jazz funk territory, with the audience clearly in the groove with the band. The keyboard washes of sound envelop Che Aimee Dorval’s beautiful and floating vocal, which is then punctuated by drummer Morgan Ågren hitting the stratosphere with angular crossing drum patterns that wouldn’t be out of place in the great jazz fusion music of Weather Report.

Deadhead from the Accelerated Evolution album is utterly epic, with its layers of heavy doom like guitars driving the song into a whirlwind of heaviness. Devin’s screamed vocals leaving you in no doubt that his musical world is framed by heavy metal.

A mesmerising cover of the classic Trammps 70s hit, Disco Inferno, is the first encore. It is led by the wonderfully soulful vocals of Che Aimee Dorval, and accompanied by Devin getting the audience (successfully) to pass back cocktails from the stage to the lighting and sound people, Stanley and Mike. With its thumping disco beat, you realise that this band can literally play any form of music and make it their own. The set finishes with the classic and celebratory Kingdom, with some impossibly fast polyrhythmic playing by drummer Morgan Ågren.

Highly recommended is to view the video of the concert, for the visual sense of this exceptionally gifted group of musicians, alongside the changes of costume, backdrop visuals, and an audience that is completely with Devin whatever he asks of them.

Here is Why taken from the video:

It is impossible to do nearly two hours of music justice in a review. You just need to hear it for yourself, and you will undoubtedly become a convert of both Devin and metal.

You can find Devin Townsend here