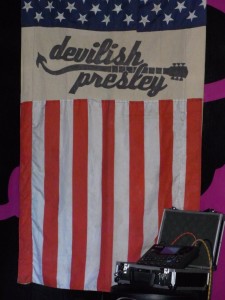 Well, as we know, the devil has all the good tunes. Just look at Christian rock. However, this doesn’t guarantee success, especially if I like your songs. So, alongside Jonny Cola And The A Grades, we say farewell tonight to rocking duo Devilish Presley. Johnny Navarro, Jacqui Vixen and their trusty drum machine are taking their unique brand of gothic tinged rock n roll on a farewell tour, so I find myself in The Pipeline, East London, for the first time. 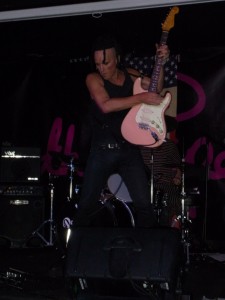 It’s a nice little venue, with the club in the refurbished cellar. I missed the first band on, The Court Of Sybaris, but caught the end of The Underrunners‘ set. An interesting slice of goth-rock, with some nice melodic guitar lines.

Nice is not a word you can use to describe the sonic assault of Global Noise Attack. Entertaining, yes. A tad disturbing, certainly. Guitar, bass, drum machine and demented singer, in a Crazy Arthur Brown way; they spend more time in the audience than on the stage. They urge the crowd to join them and, eventually, they move forward, some even dancing on the stage. They end with a pleasingly shambolic version of Crazy Horses. 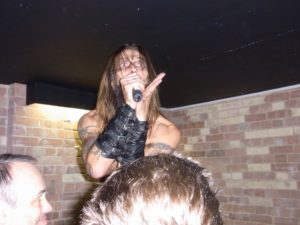 Now is the time to say goodbye. Thirteen unlucky years, maybe, but Devilish Presley have worked harder than most bands to entertain whilst keeping a brain in their heads. Yes, there are dumb rock songs, but there are plenty of smart, acerbic lyrics throughout their six albums and various singles. My only complaint tonight is I wish they’d played more from their final album, The Electric Ballroom, which was a great album to end a career on. Still, the faithful Devil’s Dandy Dogs are treated to Hammer Horror Glamour, Black Leather Jesus and an encore with Billy Rattlestick. 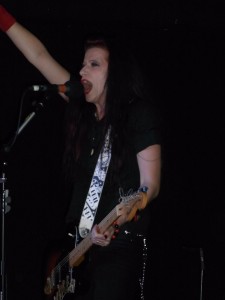 All of us here tonight know that Johnny means it when he says there will be no reunions or further tours, so I/we really had to be here. He and Jacqui thank the devoted followers who have helped them along the years; it’s clear this means a lot to them and the feeling is mutual. Another of my favourites are gone, but I wait eagerly to see what Johnny does next. His recent novel Kill Devil Delta may point the way.

Devilish Presley have left the building.