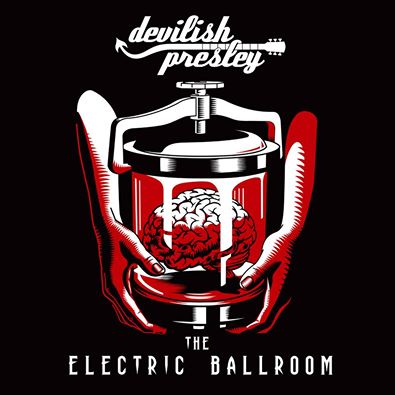 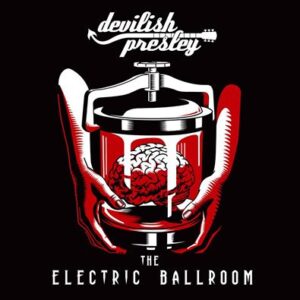 I have lamented in the past that any band I like is doomed to failure, poverty and obscurity. It’s not like I enjoy being proved right. Not about this, anyway. Following in the footsteps of the chronically underrated Jonny Cola And The A-Grades, Dark Glam (my term) rock duo Devilish Presley have decided to call it a day after a presumably unlucky 13 years. The good news is that they’re going out with a bang, leaving us with a new album, perhaps their best; ‘The Electric Ballroom’. They’re also treating us to a farewell tour, which will mean dusting down the drum machine for one last hurrah.

What we have here are 13 new songs of glam crunch, gothic glitter trash and even a hint of electronica. Plus a rattling run at Suzi Quatro’s classic ‘Devil Gate Drive’. The opening title track makes its intentions clear; “lift us out of the gloom, this is the voltage, electric ballroom”. And boy, do we need lifting out of the grey musical doldrums nowadays. ‘Poison In The Soul’ has the spirit of Bolan boogieing across it, but Johnny takes a vocal backseat on this album, allowing Jacqui Vixen to put her unique stamp on every song. Part female Lemmy/part Joan Jett on steroids, she holds nothing back.

‘Ain’t No Kind Of Nothing’ has a touch of Ghostdance about it, and ‘The Hunger And The Haunt’ is also gothically-tinged but in a pleasing way. But we’re never too far from a raucous rocker, so here comes ‘Bone Bad Daddy’ with its rockabilly riff upping the tempo. Hope they play it live. ‘Flame Job’ rocks, but with some added programming (I’m clearly no expert). The verse is almost ‘Crazy Horses’; this is a good thing.

‘Old Town Religion’ is the trademark Devilish Presley sound, to me. If you love them, I hope you agree; it doesn’t really sound like anyone else. I’m going to miss it. The title might be to do with Johnny’s excellent debut novel, ‘Kill Devil Delta’; check out the facebook page to order (it comes with a full album by the duo’s fictional band, Crowstone). ‘Snake In My Fur Cave’ unsurprisingly sounds not unlike The Cramps. Splendid title. ‘The Incredibly Strange Creatures’, complete with B-movie samples, haunts as only DP can do, while ‘Teenage Tupelo’ livens things up (in an undead way). I’ll be down the front with the “la-las”.

‘Dead Of Night’ would suit Stiv Bators’ voice a treat. Somehow, it’s quite moving with its nagging chorus. ‘The Zombie I Love’ is actually a great pop song; “it’s o.k, you get used to the smell”. And plenty of “do-do”‘s. This plus ‘Devil Gate Drive’ and ‘Twitch Of The Boogie Nerve’ ensure the album ends on a blast. The longest track is 3.34; all the songs are lean and tight. After 13 years, Devilish Presley have pretty much honed their art. Maybe they’ve said all they want to say within this genre. Whatever the reasons, I shall be there at the front to celebrate the fact that they existed and made the world a lot more fun while they did. Johnny and Jacqui, I salute you.

14th; Birmingham, The Actress And Bishop