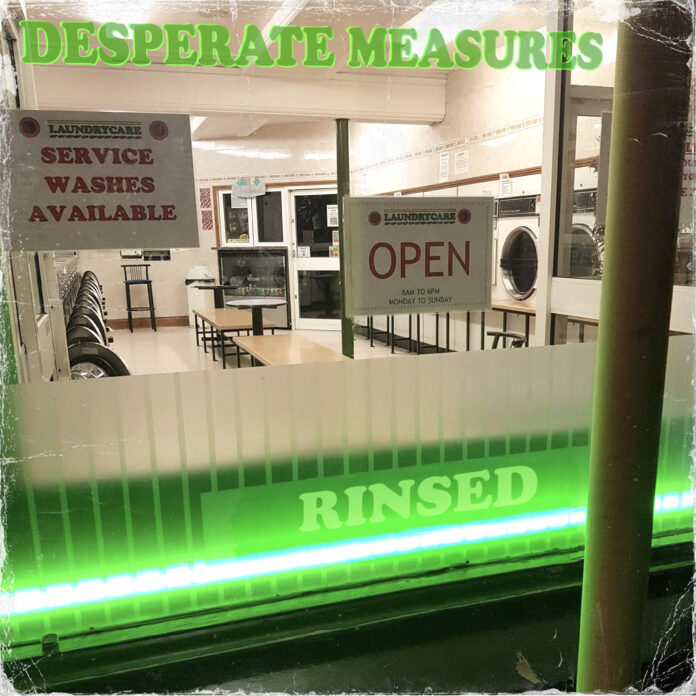 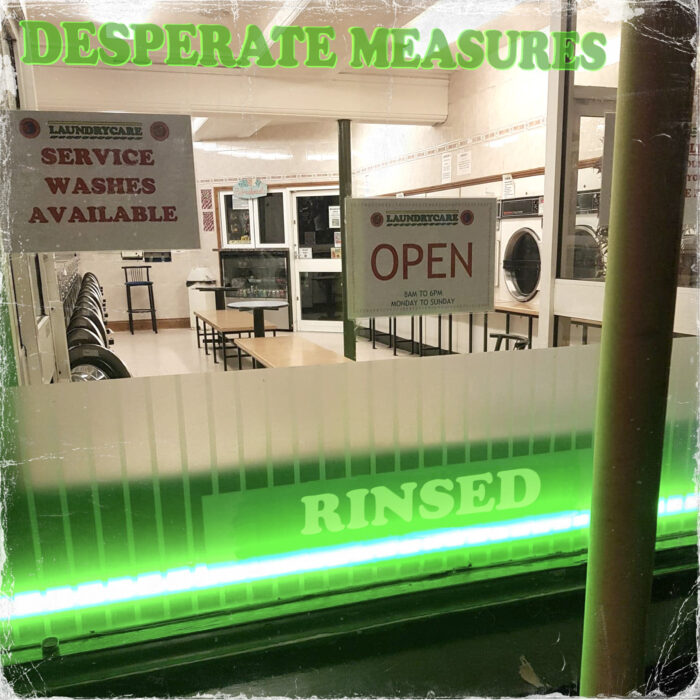 Sometimes only a shot of rock n roll will work.

In these claustrophobic suffocating times, our only savour is the multitude of musical forms that take us down a myriad of rabbit holes. Every minute of every day there is a beautiful or brutal distraction but no matter where you wander on the journey punk rock somehow always brings you back.

The planet is now rammed full of punk bands of all shapes, styles and sounds – that’s the power of the music – anyone can pick up a guitar and make a noise – it’s a brilliant and thrilling free for all. Sometimes it falls into the hands of either a teenage crew who are so open and so full of energy that it pours out of them or sometimes a gang of old lags who have spent their lives immersed in the music strip it all down to the basic rush of what it’s meant to be about.

It’s fair to say that Desperate Measures are in the old lag catogary. In the best possible sense. This is a band with plenty of form – amongst their line up they feature leading music PR James Sherry on drums and the editor of premier punk and rock magazine, Vive Le Rock – Eugene Butcher on vocals. Despite their successful media roles they seem to prefer to spend their time in cramped rehearsal rooms and even more cramped venues delivering the music they love and on their own terms.

This is no hobby though. This is a tense guttural explosive punk rock full of intense energy and big tunes. The band was formed back in Christchurch New Zealand in 1980 by Eugene when he was a wild teenager dreaming punk rock dreams on the other side of the world. After the band split he moved to the UK and constructed a mini-magazine empire out of his passion for music. With the creative twitch, he reformed the band a couple of years ago and instead of a drunken party four of his old mates ramshackle jamming him and his crew have created something that has a real purpose and drive to it.

Spending a lifetime listening to his music they have honed it down to this tight, clipped, visceral and powerful machine. It’s the bare bones of punk rock crisscrossed with those rockers who gave a nod to punk rock like AC/DC and Lemmy and a twist of early American hardcore and blasted back out again at a high decibel.

Every track delivers its message – the needle can hit any groove and the melee explodes into view. There are chugging guitars, gnarly angry vocals and big choruses. This is a music that is all about a tension and release and is a crafted and perfect rush of very noisy adrenaline. For a style of music that was birthed by youth youth youth punk rock can sound surprisingly thrilling in the hands of the older centurions.

Sometimes we all need their wisdom, madness and passion. These are all the old dudes who never lost that passion and fire and can still articulate all their rage and hurt and confusion into three-minute rushes of addictive noise that with added power tool production makes for a startling reaffirmation of the form.