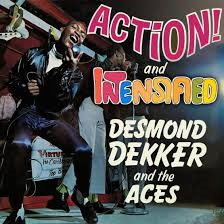 Desmond Dekker And The Aces

Reissue of two rocksteady-era albums by Desmond Dekker And The Aces (only originally released in Jamaica) plus 28 bonus tracks of alternate takes and rare songs. Ian Canty hears the beat slow down and then speed up again, but DD & Co never missed a step.

Doctor Bird only very recently issued Desmond Dekker’s You Can Get It album (reviewed here), which found our hero at the height of his fame in 1970, but for this one we travel a little further back in time. Dekker had been a star in Jamaica since his ska days, but the intense heat of 1967 prompted the beat to slow down, ska’s manic rhythms proving too exhausting the dancers. Rocksteady was born, but this change down in gear was to prove no obstacle for Dekker and the Aces. They possessed voices that would naturally convey the more emotion-filled lyrics of the soul-inclined rocksteady, but also could pull off the tough Rude Boy skanks (see the looping, wonderful hit single 007, that is included on the Action LP) which together comprised Jamaican music’s two-pronged attack during the Summer of Love.

Desmond Dekker and the Aces (Barry Howard, Carl Samuel and Clive Campbell, who would leave the group just before their first promotional visit to Britain) were also acquiring a firm following in the UK which would result in a great deal of chart success over the next couple of years. The early Mods in London had picked up on ska soon after the music first emerged, mostly on imported discs obtained by the West Indian population that settled in Britain after a government drive to fill gaps in the labour market in the wake of the Second World War. Though fashions were changing, the UK’s trendsetters kept a soft spot for Jamaican music and rocksteady, which came in ska’s wake, was a music perfect for dancing in the clubs and nightspots. The soul-like style to the music, smooth rhythms and vocals sat neatly alongside Motown etc for the DJs and provided the jumping off point for rocksteady and reggae’s success in the second half of the 60s.

Aside from the actual contents of their Jamaican debut album Action (a singles collection entitled 007 Shanty Town had been released in the UK a year earlier), the sleeve picture is as good an example of music photography as there is. If someone had said “find an image that captures all the excitement, charisma and sheer exuberance of Desmond Dekker And The Aces live” you really couldn’t do much better. The music inside, if less frantic than his ska days or the reggae to come, is both gleefully alive and expertly crafted.

The Aces’ voices work as the perfect backing to Dekker’s, even sometimes utilising styles that go right back to ’50s R&B/doo wop. Essentially both this album and the follow up Intensified were collections of their single sides, which was the run of the mill practice in the Kingston record business of the time. This was mostly done to get the maximum mileage out of a popular song, but also because of limited studio time and its inherent costs.

007 has gone down as perhaps the ultimate Rude Boy tune, but Sabotage runs it close here. Keep A Cool Head is more an appeal for calm to the rough youths, but musically it has a silky smooth backing which provides a perfect setting for Dekker’s impassioned vocal. The jazzy chops that always figured in the background of ska recordings make an easy transition to the slow rocksteady beat on Personal Possession and Young Generation: the brass on the latter is particularly lovely to hear. There are great versions of classy singles Rudy Got Soul and Bongo Gal appended to this disc and a chiming guitar gets a chance to shine on Fu Manchu. For me though, the stand out of the bonuses is Shing-A-Ling, a more sparse musical setting with understated piano where not one note is wasted and an effortlessly cool lurch to the rhythm. An absolute beaut.

By the time that Intensified arrived towards the end of the 1968, Desmond Dekker and the Aces had experienced chart success in the UK with 007 and Ah It Mek and had toured there to a highly favourable response. This set again featured single tracks collated into an album (and was again only released in Jamaica), but this time the slightly later recordings found Dekker and the Aces progressing from the rocksteady that was on the wane to the new craze, reggae. Ah It Mek is the perfect “on the cusp” recording, cool and fluid, but with that signature jerky reggae guitar line. That added to an appealing brass section and sound song composition, it was a deserved hit single.

This new record also contained their biggest hit, one that spearheaded reggae’s emergence as a force: (Poor Me) Israelites. It’s a classic of course, with a wonderfully baleful low backing from the Aces playing off against Dekker’s perfect high voice. But it is far from the be-all and end-all of Desmond Dekker and the Aces, as the accompanying 25 tracks on this disc ably demonstrate. For instance, they were unafraid to cut a straight soul tune, like My Lonely World (To Sir With Love) or Tips Of My Fingers, a 1962 US hit for Bill Anderson and one of the few covers the band performed. Again the Aces’ contributions throughout are expertly performed. Though Dekker would soon got it alone, they were a crucial ingredient in his early success, providing highly skilled support at all times.

Rude Boy Train is a flash back to their recent rocksteady past, but a great one, with a really infectious beat. Too Much Too Soon (Were The Specials listening to this one?) is striving forward though, with a typically busy reggae bass-line leading the way and Dekker’s gospel roots show on his emotional delivery of the song It Is Not Easy. There’s shades of jazz in the playing on the wonderfully titled Nincompoop and Wise Man has a nicely jaunty rhythm allied to a humourous approach.

Though Intensified does tend to go back and forth between the two styles on a track by track basis, this does make for a more varied musical vista than Action and is probably the better record of the two. The magnificent title track has that kind of Prince Buster holler over the beat that even slightly pre-empted the DJ talkover boom that was still two years off in the distance and also certainly was a near irresistible invite to cut a rug. For some reason it was decided that the Intensified album would not be released in the UK (though a version did make it to press in 1970), baffling now I suppose, but back then things were very much driven by the single format and as they had a sure fire smash with Israelites, that took precedence.

Of the 16 bonuses on this disc I’ve always had a soft spot for Unity with its touching message of hope and the alternate version here for me just about trumps the original on disc 1. The spooky backing vocals and excellent bass work give Hanging Tree an edge and those golden voices and drive that the Aces possessed in, er, aces is well used on Sentimental Reason. Dekker’s songs always were interesting, steering clear of clichés for the most part and the strident Problems is another good example of his craft. Along with the LP proper, these bonuses help provide a great snapshot of how reggae was developing throughout 1968, just as it was about to explode.

Action/Intensified is simply a superb collection of a couple of valuable albums that are pretty hard to come by and the bonus tracks help to give a pretty definitive view of Desmond Dekker And The Aces’ highly productive and successful year. 1969 would see them hit the top of the UK charts with Israelites and making the Top 10 in the US, but the seeds were sown in ’68, when they were the biggest musical force to come out of Jamaica and endlessly creative. Another nice reissue from Doctor Bird.