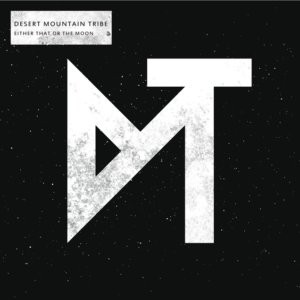 Desert Mountain Tribe – Either That Or The Moon (Membran)

Cologne via Croydon psych-noisenik three-piece lay down a daunting early-year marker for the competition. Louder Than War’s Joe Whyte reviews.

Psych-rock is a funny thing. For every true explorer of the outer limits there’s another that’s basically shoegaze-in-disguise. Shoegaze, to me, is basically the sort of people who were into the C86 scene and then discovered effects pedals could cover their inadequacies. Sweeping statement, I know, but all of those ex-cuties with their MBV fantasies used to get right on my wick. Thankfully, there’s a whole raft of sonic adventurers out there who are willing to go full mind-melt for the good of the rest of us. Step forward Desert Mountain Tribe, a three-piece who also have lots and lots of effect pedals but know how to get down and slinky as well as seriously full-on war-zone.They released their debut EP (“DMT EP”, produced by Brett Orrison from Black Angels ) in 2014 and since then have been blow-torching the crowds senses on support slots with the likes of Damo Suzuki from Can, Toy, Wovenhand and Wytches.  Subsequent appearances at some of the premier European psych festivals such as Lisbon Psych Fest and and Eindhoven’s Psych Lab have given DMT quite a profile in recent months.

Bass and drums are Phillip and Felix Jahn respectively and who could possibly find it in their heart to dislike a band who’s singer and guitarist rejoices in the magnificent moniker of Jonty Balls? Certainly not me.

The single that trailed the album was “Runway” which saw some comparisons to God-awful lad-rock charlatans Kas**ian. (I despise them so much I refuse to use their name) but this is a huge disservice. It’s a monstrous groove machine with some head-fuck guitar and shape-shifting vocals that would knock Serge and his pretenders onto their pretend-I’m a-druggy arses.

“Feel The Light” opens proceedings and lays down a daunting marker; thundering drums, looped, feed-backing squalls of guitar crash against a bass that sounds as if it’s shifting tectonic plates. The vocals are sparse to the point of it almost being instrumental but when they appear, ghost-like, towards the end, it’s a moment of real class. It’s not all in-your-face and volume; “OC Dream” is just that, a lingering, wandering shadow of a piece of music which builds into another chiming, shimmering climax.

“Enos In Space” ( It’s about the second chimp in orbit; I so wished it was a mis-spelling on the sleeve and was really about Brian Eno being in space) has a whirlpool of keyboards that soften the clang of guitars and rush of drums. the spirit of krautrock is never far away from the album and “Take A Ride” has that Neu/Can propulsive attack going on.

With two bonus tracks (Coming Down and Leave It Behind), there’s plenty to get ones synapses bent and twisted by herein. There’s some of the album on their Soundcloud and dates are due to be announced for later in the year.

Desert Mountain Tribe can be found on Facebook and Bandcamp.