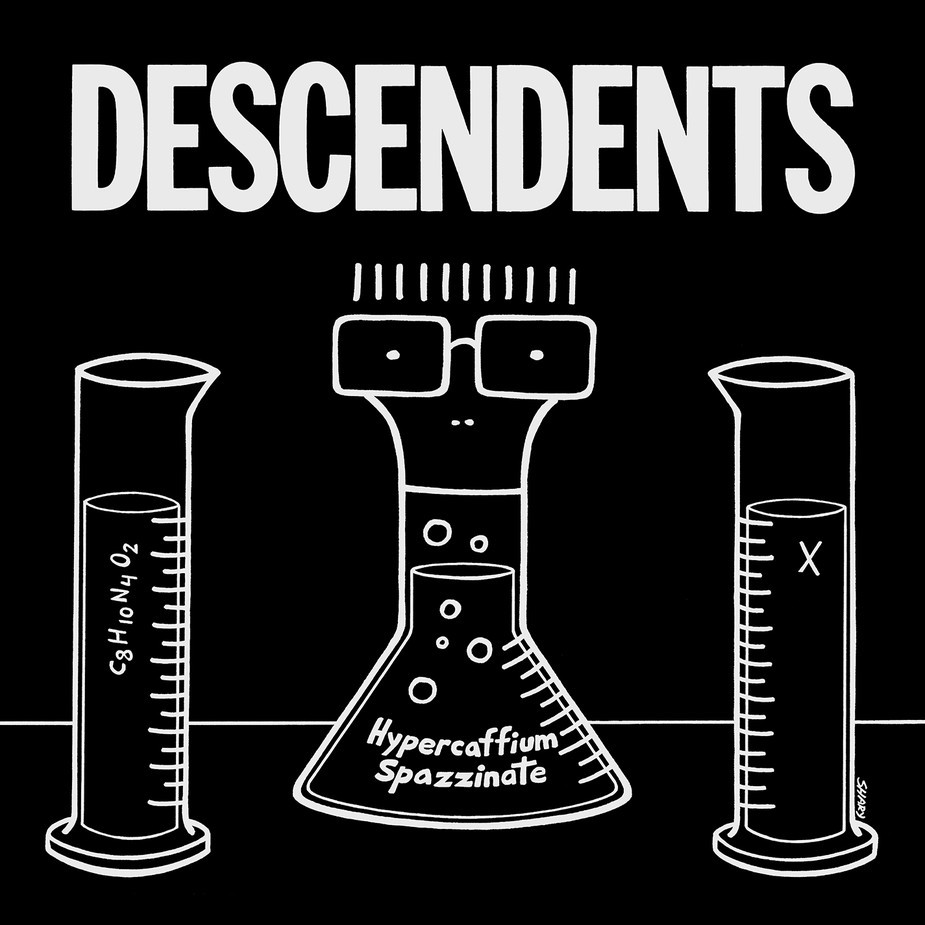 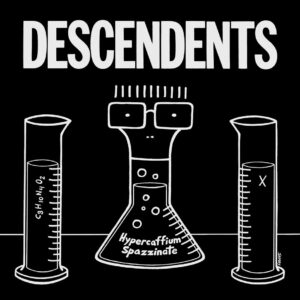 Descendents’ first release on Epitaph since ‘Everything Sucks’ in 1996.  Formed in 1978, the concept of the band is ‘ Punk, pop, buzzing, summery, heartfelt, defiant, adolescent, and wise all at once’ says their publicity blurb. He digs the tuneage but Ged Babey is unimpressed.

Sixteen tracks in thirty-two minutes, fast, tuneful, technically perfect guitarage, bass-age and drum-age. Descendents doing what they always did, making great, solid, punk pop and sounding fresh and half their age.  (That’s the short version the band can quote from in future press releases, and it is true, because this album seems to have been universally praised as a great return-to-form.  Are Descendents the natural successors to the Ramones…?  Er… No. )

Descendents are ‘legendary’. (They’ve been around a long time and sold a lot of records in the States. The Milo logo inspired Bart Simpson into being.)

Descendents are ‘influential’.  ( They spawned a thousand pop-punk bands who have ranged to excellent to utter, utter shite.)

Descendents are back.  (Its 2016 , they are in their fifties and have incorporated the word spazz in their album title.)

There are very few ‘punk bands’ I don’t like. I can usually find something to like in most bands work.  That is, if they don’t instantly grab me, which most do…

Descendents some how passed me by.

I love all their peers (Dead Kennedys, NoFX, Angry Samoans, Black Flag, Circle Jerks) … and I have heard, Milo Goes to College and the rest of their ouevre, but somehow it never made a lasting impression on me.  Descendents were just ‘OK’.

I thought I’d offer to review this for a couple of  reasons; To see what I’d missed – to try and learn to love the Descendents, after all a lot of peeps I know love ’em.  Secondly, it annoyed me that the word ‘Spazz’ appears within a word in the title. I had a heated debate on my Facebook page about it, the conclusions of which seemed to be ‘it’s not as offensive in America’, ‘FFS its the Descendents so it’s part of their dumb-ass, frat-boy appeal’ and ‘it’s not big and clever in this day and age. Offensive archaic language needs a helping hand to die out’.

Musicwise it’s a hard and fast, solid-fluid summery punk-pop sound. Technically perfect.  Which is what starts to put me off.  Its too generic and predictable.  There’s nothing wrong with it, but nothing exceptional either.   It gets a bit Ramones play They Might Be Giants at times – which basically is the bands schtick – particularly on a song called ‘On Paper’ which would be a humourous account of how Milo’s CV is way better than his personality, had he not decided to rhyme paper with ‘raper’.

Fans of old will love it as it doesn’t deviate from the goofball template but whether it’ll make them any new fans I wouldn’t put money on.  They’re are old and grey and tubby now (like the rest of our generation) so teenage-girls (the traditional audience for Pop -which, in the words of XTC, This Is..)  aren’t gonna come a-running.  They are not radical enough for a young and angry nu-punk audience either…

…and that’s another thing; there is nothing in these songs which tell me anything about America in 2016. I’m not expecting ‘Anarchy in the USA’ just some kind of subtle indictment of Trump or Clinton, I dunno.  Descendents deal with their personal issues I guess.  There is a song about the death of a parent, a song about kids with ADHD being over-medicated, a couple of  serious self analytical songs and of course one about eating low-fat food now your old and fat!

(From the Press Release)

“I think one of the things that’s kept us inspired over the years is having the music as an outlet for our frustrations,” says Milo, who delivered a particularly impassioned, even aggressive vocal performance. “Having the freedom to completely blow my voice out every time I recorded was a very positive experience for me,” he says. Personal catharsis was a prime motivator for Bill, who names “my relationship priorities and my own faulty psychology” as his top inspirations. “In a way, putting pen to paper and getting whatever you need to get out of you is the big accomplishment,” he says.

But what about the frustrations and lack of freedom of being poor or black or gay or disabled in America.  Well Descendents are comfortably off, white, straight and able-bodied so can only sing about what they know I guess.  But why use ‘spazz’ – how can it be less-offensive in the States.  I know, I know there was a song on Nuggets called Spazz, the Stupids had an album called Retard Picnic  and so on and on… and I and people like me should ‘lighten up’.

I wouldn’t go as far as Real Gone webzine seem to have, and call for a boycott, because ignoring the title it’s a perfectly good album…. although, put it up against the albums by Keith Morris’ band OFF! and it falls short.

One of the most astute comments on the issue of the use of ‘spazz’ was made by my mate of reduced stature Steve Greenaway (Salisbury cult hero and barstool intellectual).

No doubt there’ll be disabled people offended by it, but there will be those who aren’t. To suggest they’re all offended (or ought to be) is to deprive disabled people of their individuality which is every bit as ‘offensive’ as calling them names. Perhaps the sorriest aspect of the whole PC ‘thing’ is when people don’t get personally offended, but get offended on behalf of others. It suggests that they know best what’s good for the ‘targeted’ group better than they do themselves.

People (bullies) pick on peoples’ differences. It says more about the bully than the people they target. Somebody calls me a short-arse,, or you a ‘speccy git’,, I say we’ve already ‘won’ because they’ve betrayed their own low self-esteem by their need to belittle us. I don’t get offended,, I get DELIGHTED. Other short-arses may not feel the same way, so you shouldn’t lump us all together any more than you should with disabled people.

Alex Main also had a valid point to make…

in a world teetering on the edge of world war three, Donald Trump about to become the president of the USA and terror on the streets, maybe a momentary distraction as a bit of respite from all the shit isn’t really worth getting upset over. In the grand scheme of things it really isn’t going to matter that much.  If the intent was to laugh at the disabled then that’s crap, but disabled people currently have more to be concerned about with austerity cuts and being marginalized by people who will have no idea who the Descendents are…

So fuck it, enjoy the tuneage and love thy fellow man motherfuckers. The Descendents have made a great album with a rubbish title which inadvertantly causes controversy as it crosses the Atlantic.  Hey, at least they didn’t diss fags… (Cut!)

The band have the following social media accounts

All words by Ged Babey except where stated