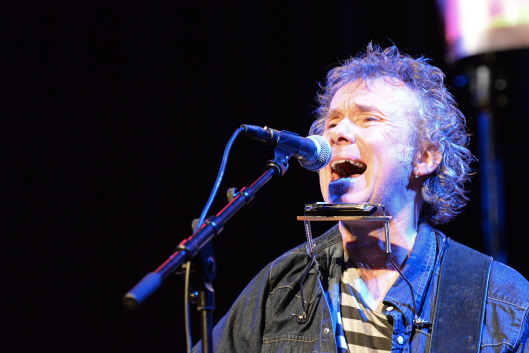 We caught up with Des Horsfall ahead of the special appearance he made with Slim Chance at The Ents Shed in Bedford. Des has just released “Chameleon”, a song co-written by Katie Lane (former wife of Ronnie Lane), Pete Townshend and featuring arrangements by Des.

Thanks for taking the time to chat to LTW Des, could you tell us a bit about where and when you started playing music ? Were you born in a musical family?

Well not really, my mum and dad use to sing in the pubs like most people did back then. My sister played piano and I just started playing guitar when I was sixteen with one I bought from a cousin for 50 pence. I actually got a Beatles guitar from my Auntie Pauline in 1964 but that was just a toy – I still have it. I started playing in bands round the same age, the usual cover stuff (House of The Rising Sun). Halifax where I was born was a kind of heavy rock town but deep down the thing I really wanted to play was country music, I was a bit of a freak really. I’d be listening to Charlie Rich and then I’d put on some Black Sabbath. As I was growing up in the 1960s I was hearing The Byrds, The Beatles – so all these things had an impact on me musically – they were around me. I vividly remember Tambourine Man – and that riff! To this day, the sound of jangling (Rickenbacker) guitars sends a tingle down my spine.

And what did you do after the cover bands ?

Well round 1979 I joined a hard rock band from Lancashire called “Turbo”. We did quite well, nearly getting signed, but musically it really wasn’t what I wanted to do. I was just the singer and I wanted to strum a guitar. I remember wanting to be in a band like Dr Feelgood, an earthy-roosty outfit. I carried on in the country music field, started writing my own songs and getting bands together. In 1983 I joined a really good band called “Raw Deal” in the vein of Free (of “Alright Now” fame) through an add in the Melody Maker as I could sing in a register very similar to Paul Rogders. The band got picked up by Alexis Korner and he started managing us. The angle he had was that he had found the “New Paul Rodgers”. I don’t think I was fully aware of the luck we had to be involved with Alexis at the time. Unfortunately he passed away and that kind of scuppered the whole thing. His wife Bobbie tried to take over but it didn’t work – soon after, I left the band.

What did you end up doing after quitting “Raw Deal” ?

Well I was still interested in upbeat R’n’b and country music. I was digging people like Springstreen, Petty…From then on I was just forming my own bands. I kept on gigging but the real big break came in the early to mid-nineties. I met a guy called Ian Sandall who ended up helping on management  but also made some fantastic music videos. At the same time CMT (TV channel dedicated to country music) was really starting to take off. Ian made videos for my songs “Texas”, “Whistle To Blow” and “On My Way”. I started getting a lot of airplay. A guy called Paul Fenn from Asgard Agency saw me on CMT. Paul started helping me out getting opening slots in London and I kind of became the “official” London opening act for Country artists that toured the UK. I got played on VH1 and got signed to a small label called Southbound. These times were really weird though, because there was a country music scene in England that I wasn’t really part of – a kind of cabaret / workingmen’s club venue circuit. I’m more of a rocker, I was into Joe Ely, Steve Earle and the edgy, side of Country. Paul got me opening slots with Joe Ely, Steve Earle, Emmylou Harris and loads of other great artists, I was very lucky to get all these but at the time probably didn’t realise it. However I was kind of being steered into the cabaret thing by the label because there was lots of live work.

I wasn’t having any of it though and shortly after that – the whole thing fell apart – I was a burned out. In the late nineties I did an album called “Mixed Grill” with a guy called Gary Hall. He had his own studio in Preston and we became really good friends. I still had the odd good gig through Paul Fenn but by then I had been trying to make it for almost twenty years and not getting where I wanted to be.

So what was your next step ?

Well I actually decided to take a degree in music production as a way of taking my mind off things. I did that at Leeds’s College of music which turned out to be really really good. Round the same time. I built and equipped Valve Studios. With the knowledge from the course I started laying the studio out. I was still playing live but not doing very much. I actually put out a live album with a band called “Fallen Horses” in 2000 who were a really good band. We did some great support slots. I started doing an album in 2006-7 with Andy McKerlie playing all the instruments. We recorded the basics of it live with the gear from the studio at The Trades Club in Hebden Bridge. We got back to the studio and listened to it and we thought “This is not working, we need some kind of focus”. Soon after that I found a Ronnie Lane singles compilation that I had no idea I had and it all started coming back to me, the images of seeing him on Top of the Pops with fiddles and squeeze boxes. Bands like McGuinness Flint, I used to love all that stuff when it first came out. I thought this is it, that’s what we need to be doing. I went to see Andy and told him that we needed to follow that path.

What was the recording process for what became The Good Gentleman’s Tonic ?

Well I recorded all the backing tracks and then I started getting in touch with all these people that had played with Ronnie : Benny Gallagher, Steve Simpson, Charlie Hart. I just kept on pestering them saying I ‘d done this album and named my band Kuschtye Rye after one of Ronnie Lane’s song and did they want to play with me. Charlie was actually very good, I can’t recall who joined in first but he was very positive and agreed to do it straight away saying it was a great idea. Steve Simpson got involved too, I was also in touch with Billy Livsey who played keyboards in Slim Chance. I did this huge amount of research trying to find out everyone that had been in Slim Chance. After a long period that became “ The Good Gentleman’s Tonic” (round 2008). With Graham Haigh, the guy who helped me put together this project we went out to see Charlie round the same year where I discovered about the Memorial concert that they had done for Ronnie at the Royal Albert Hall in 2005. I was so staggered that nobody knew about Slim Chance so I set out to make it right.

Charlie introduced us to Katie Lane and we became really good friends, immediately hitting it off. She got involved in the project and then we decided it had to be a trilogy and that the second album had to be about her because it was an untold story – no one really knows how much of an influence she had on Ronnie’s musical direction at that time.. I wanted to put that right too! We did some fantastic interviews with Katie. It took us almost 3 years to get the album together. I had managed to send the mixes of the first album to Pete Townshend but it was pretty much finished and he couldn’t see where he could fit in but we decided to stay in touch if anything else happened. Katie at some point gave me the lyrics of “Chameleon” and asked me to write some music for them. She‘d had some music for it but had subsequently lost it.They’d gone to Pete’s publisher and they couldn’t find them so she just said “we’ll write some more music to it”. I wrote something but she didn’t like it and said that maybe we could ask Pete to write something so I got in touch with him and he agreed straight away. He sent me a demo and the tune was in a really weird tuning that would have taken me a long time to learn in order to record it. So Pete said, “well do you want me to play the guitar” I thought about it for a millisecond and said yes please. He ended up sharing the vocal with me too! Which he sent up on a reel of tape and I built the track that you can hear now, around it. Steve and Charlie played on it as the “Fishpool Philarmonic” and here we are

Chameleon is available for purchase on iTunes and The Bastards Tin will be released nationally in 2016.

~
Further info on Des can fe found at deshorsfall.com or kuschtyrye.net and at his Facebook page.