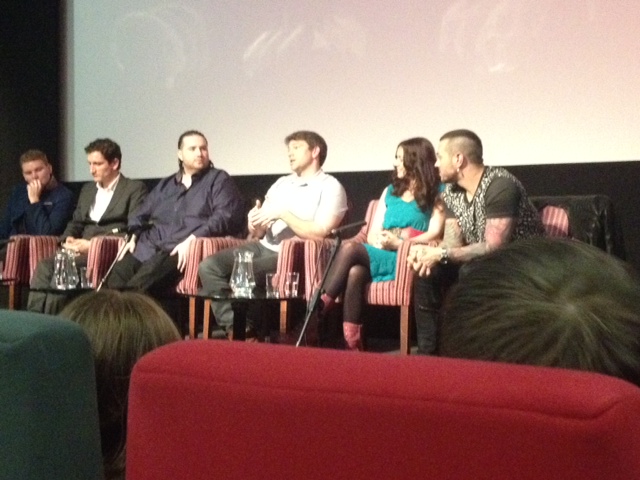 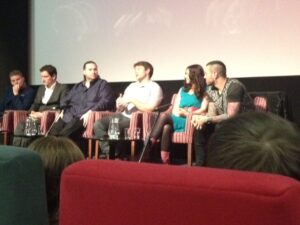 Derby director Dominic Burns and cast members from his forthcoming WWII ensemble film Allies, inspired and entertained as part of a panel discussion at Derby Film Festival. Our Features Editor Sarah Lay went along to hear the panel discuss independent productions, filming Allies and sharing wisdom from their careers.

The streets are glistening from a recent spring shower but this Monday evening they are quiet; the occasional person hurrying home from work, laughter between friends as they jostle their way from the bus station.

In the Market Place a small team of big men are dismantling and packing away the skeleton of a fairground ride as the lights spill out from the cafe bar and cast patterns on the paving.

Stepping inside Quad and the quiet of the city streets is replaced by a hustle of people arriving for Derby Film Festival events. They fill the cafe, they pack out the foyer and they queue up the stairs; more than 200 have turned out to hear local director Dominic Burns and members of the cast of his forthcoming film Allies take part in a panel discussion.

Allies, which is set to be released later this year, is a WWII ensemble movie telling the tale of a group of British soldiers on a mission behind enemy lines. Parts of the film were shot around the Derbyshire countryside and Dominic is quick to speak of his pride of bringing the cast to the county as well as at the thriving creative scene in the city.

The Q&A style panel covered tales from the making of Allies, including in-depth advice from the actors on how they got into character and bonded with each other, the relationship between actors and director as well as the experience of filming conflict scenes with tanks and live rounds of ammunition on set.

Many in the audience were aspiring actors and so the wisdom shared by the panel on how they’d shaped their careers and their best and worst moments was well received and led to a light-hearted but honest conversation.

It was the panel’s thoughts on creativity and passion that made the air crackle with the love of their craft. Taking a question from the audience about whether it was too late to begin a career in acting at age 30 director and cast were united in their insistence that it was never too late if the creativity burnt inside of you and your calling to act was compelling. Chris Reilly, who has also starred in Game of Thrones, spoke of starting his own acting career at 30 while Burns shared his belief that it was never too late.

The evening ended with a screening of the trailer for Allies which will be released later this year.

The crowd spilled out onto the glistening flagstones of Derby’s Market Place and as the panel bid each other farewell at taxi doors their audience smiled and reflected as they headed off along quiet city streets.

Allies is released later this year.

You can find out more about the Derby Film Festival on the website.

All words by Sarah Lay. You can read more from Sarah on her author profile on Louder Than War or you can get in touch on Twitter.