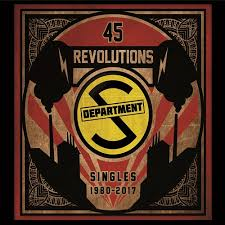 New compilation from the Is Vic There? hitmakers, featuring contributions from the original line up and also the reformed band……LTW’s Ian Canty look at Pop Music’s answer to Jason King and his chums…..

Named after the classic late 60s mystery series, Department S originally came together under the name Guns For Hire, but even that was just as a “flyer” band initially. They were the brain-child of The Face writer Vaughan Toulouse, DJ Gary Crowley and their mate Tony Lordan. The graphics produced to publicise the, at the time, non-existent outfit got around to such an extent that an agreement to do a demo session was in place quickly before the band had played or even rehearsed. With Crowley opting out of the musical process and Lordan taking up the bass, they pulled in the talented Mike Herbage on guitar to beef up their number of proper musicians from zero to one.

John Hasler, who had been manager, singer and drummer for Madness was also pressed into service in getting it together as a proper band. But after one single with him occupying the drum stool (the Ska-themed I’m Gonna Rough My Girlfriend’s Boyfriend Up Tonight c/w I’m Famous Now on Korova Records in the summer of 1980) he left the band to the leave the rest of them to have a rethink. Subsequently the three left brought in Eddie Roxy (who leads the band in the present day) on keyboards and drummer Stuart Mizon to complete the line up, changed the name to Department S and took a totally different tack.

All habitués of the burgeoning London club scene, the band also had an ace in the hole with Toulouse’s day job to being able to garner publicity, On the back of that and their previous notoriety were soon able to put out their first record as Department S, Is Vic There, at the end of the year. Originally on the Demon imprint, the record took off in 1981 when re-pressed on Stiff and eventually made 22 in the UK charts. The stay at Stiff was apparently not a happy one and despite a couple of strong follow ups in Going Left Right and I Want, the band originally split up without ever making an album.

Though Vaughan Toulouse sadly passed away in 1991, the band reformed in the 21st century with Roxy taking over the singing role. Herbage, Mizon and Mark Taylor (who took over on keys in the original band when Roxy left early on, but was back as bassist) all were on board and ex-Back To Zero guitarist Sam Burnett also joined up. Since that time further upheavals have left a line up with ex-PIL and Brian Brain bass player Pete Jones, guitarist Phil Thompson and drummer Alex Lutes backing Roxy in the present day.

This new compilation is not arrange chronologically, with tracks from the original band, their reformed aggregation and the one in operation today intermingled. Even though this is the case, for the most part it is a fairly consistent listen, with the band mostly for the duration using a palette of Post Punk, new Wave and early 80s Pop to colour their approach. The only place that deviates is among the bonus tracks, where a couple of nice Chillwave/Electropop themed remixes of Is Vic There Age Of Reason crop up. Though obviously different from the bulk of the Department S material, they do work pretty well. I can’t help think that a trick has been missed by not including all the b-sides and that very rare Guns For Hire single, which would have made for an attractive package. Also, though having pretty good eyesight for someone of my advance years, the lyrics are printed too small in the inlay.

But that’s enough carping. The singles actually stand up very well. Most reading this will know Is Vic There, but arguably the incessant marching beat of the excellent follow up Going Left Right is even better. I’ve no idea why this didn’t follow the previous record up to the Top 30 – perhaps it was too edgy for the non-stop party of the 80s that was kicking in? Their next 7″ I Want stated the case even more bluntly – a thorough dismantling of the “me me” Yuppie generation that was already threatening to take over. Still it’s an intense recording and both the London travelogue of She’s Expecting You (the flip of Going Left Right) and Clap Now still pass muster.

The early version of the reformed band’s recordings featured a few big names, with Bedders (the Madness links go on!), Glen Matlock and Marco Pirroni all contributing. Though their take on Alvin Stardust’s My Coo Ca Choo is just a novelty, they really hit their stride on Sam Burnett’s brilliant God Squad Saviour, a Bowie-style number that worked as a tribute to the great man.

Bringing things right up to date are the soul-flecked I Believe (also remixed among the bonuses) and the sprightly When All Is Said And Done. Though the work of almost a completely different band, On My Own Again does take up from where the original Department S left off in its tuneful rush.

Though not an exhaustive collection 45 Revolutions – Singles 1980 – 2017 does a good job in stating the case for Department S. Though personally I would have liked a few more genuine rarities in there from the early era, it is a solid testament to a band who seemed snubbed out in their prime, due to record company daftness and prevailing trends. At least they made it back again, with their instincts intact.