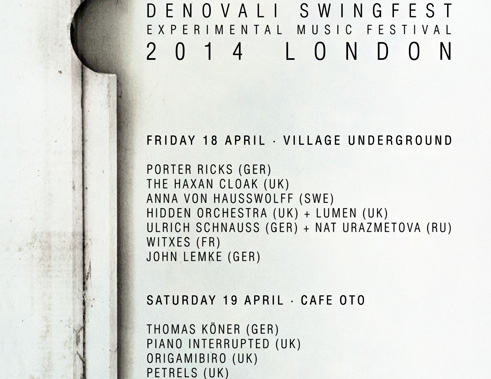 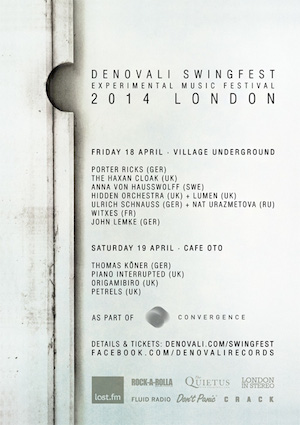 Denovali Records recently announced details of the seventh edition of their unique and exciting festival, Swingfest, which for the second year running also includes dates in the UK. Full lineup, more info and a whopping great download of music by artists on Denovali can be found by scrolling on…

It’s labels like Denovali who push music forward by encouraging and supporting artists who may not normally get the chance to be brought to our attention. Their artists may not come from the run of the mill end of the music spectrum, but most of what they release is stuff that demands to be listened to properly, ingested fully and enjoyed thoroughly. It’s music that encourages discussion and that can only be a good thing.

What Denovali showcase is hard to pin down by genre, but generally speaking they focus on darker, more experimental sounds made by artists plying their trade in some or all of the following areas: ambient, drone, indie electronica, darkjazz, piano and string driven creations. In short they’re all evidently modern compositions and yet timeless too.

But rather just read about the artists on Denovali why not just  download this free 22 track sampler, something that they released at the start of January.

To achieve the end of getting their music heard by as large an audience as possible Donovali annually put on Festivals both in the UK and across the Greater Europe. The next UK edition is now just over a month away and it looks like this year’s Swingfest will be the best ever with artists performing both on Denovali themselves (Piano Interrupted, Origamibiro or Petrels) and selected non-label artists (The Haxan Cloak, Anna von Hausswolff, Porter Ricks, Ulrich Schnauss or Hidden Orchestra with a special AV show together with Lumen.)

The festival takes place at two of the most remarkable venues in London: Village Underground on April 18th & Cafe Oto on April 19th. As usual all artists get to play a full set and each gets to play sets of the same length.

Tickets can be preordered at: denovali.com/swingfest.